Taganana an enclave of surprises

Taganana made me curious when I saw one of its vineyards and more depicted at the museum Museo de Vino of Tenerife, a few years ago.

And so is this ancient town that belonged to the Guanche kingdom of Beneharo in pre-conquest times. It is a mountain enclave ( as said already in the Guanche language).  It's located in the Northeast of the Anaga Biosphere. 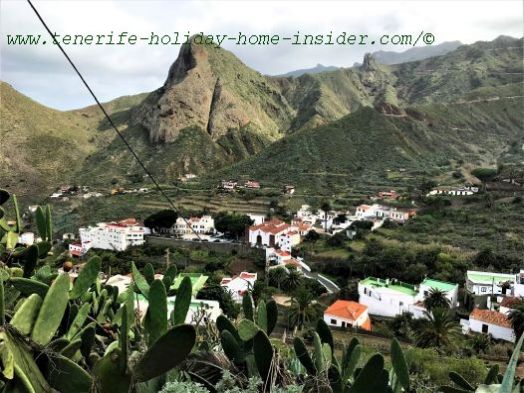 Taganana heart with its hub and Plaza de La Iglesia in its giant lush park of nature, as seen from El Portugal suburb

Its enchanting urban and rural hamlets almost hug each other with a picture book quality. Imagine a privileged place of harmony in pristine Verdite green nature with fountains and a fortunate climate. This gem at a mere 25 km from the Tenerife capital has also been the most important pivot of the Anaga rural Park together with San Andres from XVI onward. 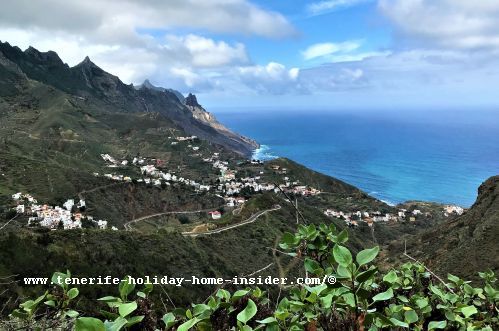 Mind that Taganana had its own Mayor and a Judge since 1518 for a long time. However now, it's within the administration of the municipality of Santa Cruz de Tenerife. 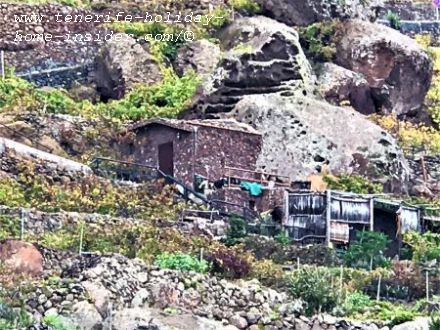 Human settlements in this region in the Anaga, above all at the hamlet Afur,  cling to amazing heights where vines and grape harvests need constant attention by ancient customs.

Above it, the Corona Forestal with green Laurisilva flora has been thriving in the mistbelt since the Tertiary period, millions of years ago. 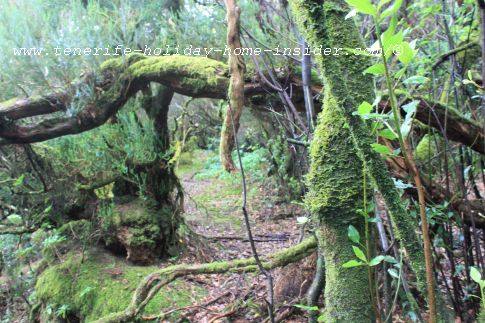 Encounter a signboard near the town hub by a tall Dragon tree on the bottom of Camino El Portugal. It indicates the Hiking options by the TF PR8 trails to Afur and Tamadite as well as to Camino de las Vueltas for  the Laurisilva forests. Others lead off from Benijo into different directions at the end of the coastal road.

I was convinced that the Portuguese were prominent settlers in this town after the first land distribution by the Adelantado around 1496. They planted the first vines, above all in the North of  Tenerife Island. I was ready to look up their names in the town's large cemetary. Then, I discovered their very own caserio the suburb El Portugal.

Indeed, it was the first and has still most character and charm. 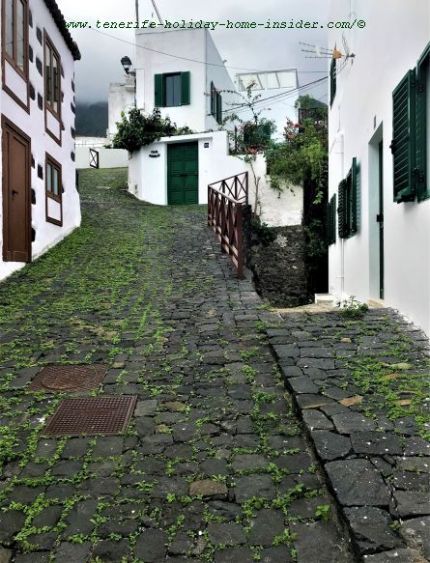 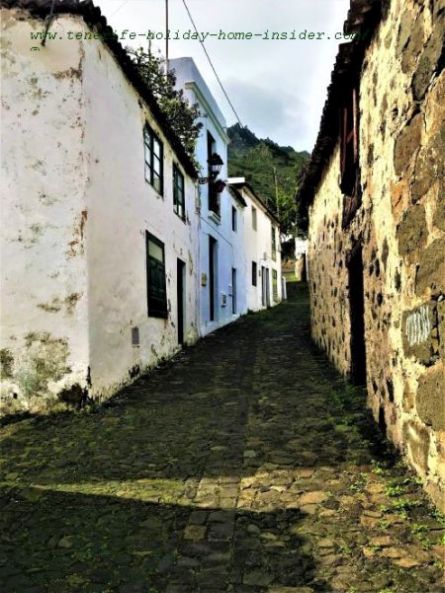 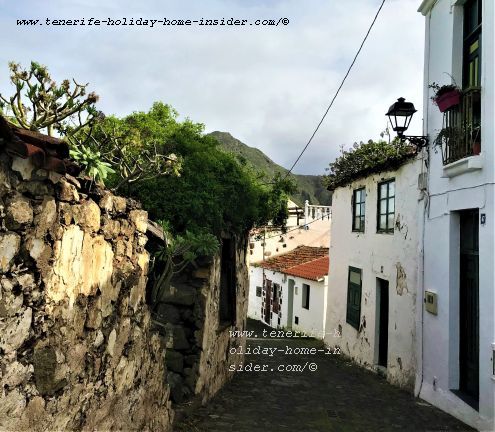 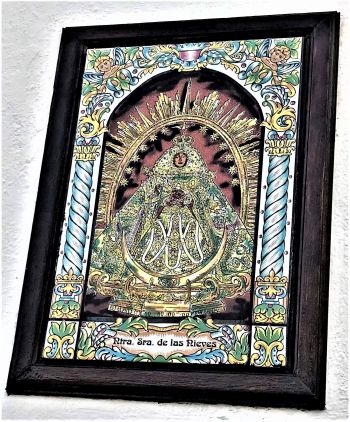 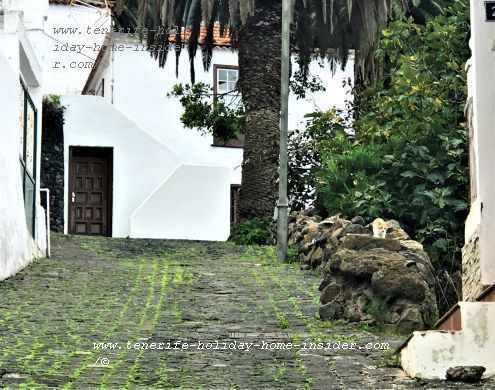 There, 500 years of Portuguese traditions live on, such as the occasional Azulejo tile on a building front.  There, paint may have peeled off to reveal the original Tosca shades.

How to make it easy to climb a narrow, steep street 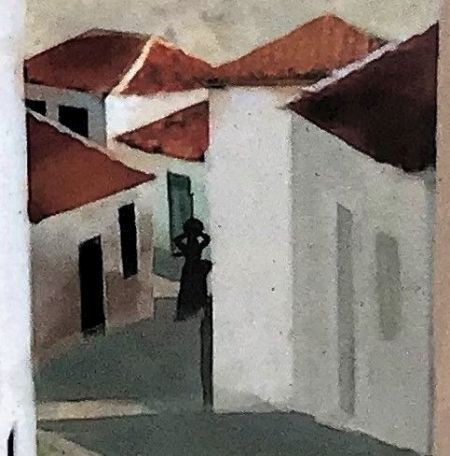 It's fascinating to see how this road runs almost in zigzag with few curves while houses were placed accordingly. This helps so much to get to the top with more ease.

Many dwellings which seldom have more than two floors were restored with the whitewash method in XX. At least, this beautifully sets off by the lush green around it. The white village look is contrary to some remote locations of the other 16 Anaga hamlets, where you can now make out the odd buildings in yellow or red, such as at Calvario, Afur, Almaciga and Benijo.

Views from many house terraces by the wayside invite to pause and you also glimpse Phoenix and other palm trees. Occasional pergolas with vines are there and tiny passages lead off with or without steps to backgardens where vines trail unattached on the brown earth with vegetables nearby. Fruit trees and flowering shrubs round off the picture. Some keep poulty which I didn't see. By the way later, I spotted goats in an enclosure at the village El Chorro of Taganana.

A pointer indicates the Camino del Chorro when you reach the top of El Portugal's central road.

The road Camino El Chorro drew me in almost magically and I could never stop until I was around a next corner. 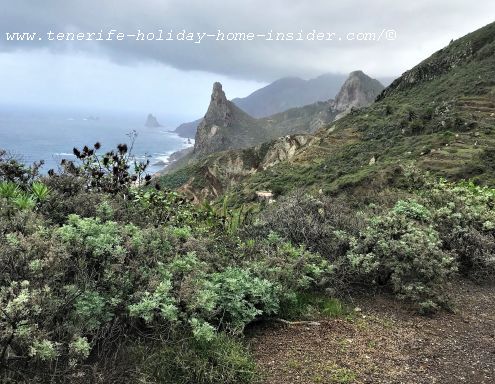 There were breathtaking ocean and mountain views over endless seeming Tabaiba bushes by the wayside. The Roques de Anaga remained companions on a remote Atlantic horizon. 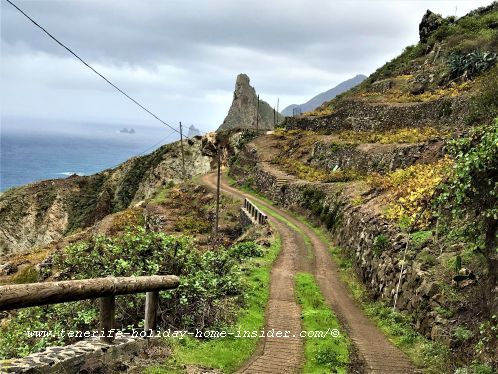 They were the typical Anaga 'free-foot vines' that are not attached to anything. Click the photos to enlarge them... 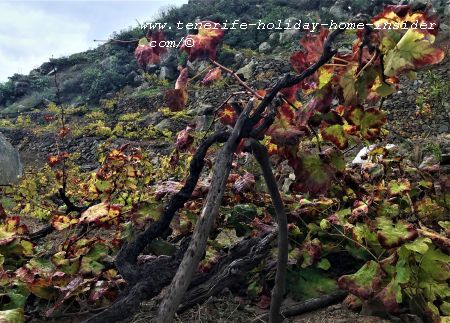 Los Auchones Taganana free-foot vines growing unattached on the earth, virtually crawling along as they please 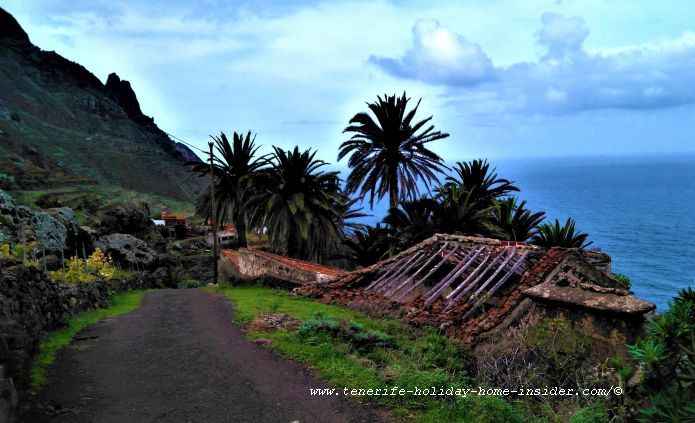 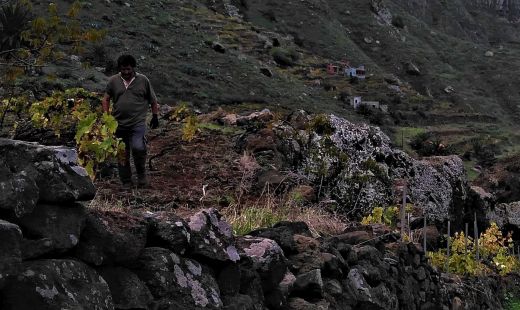 Vineyard border by Hacienda del Conde that is attended by a worker on November 13, 2019, with vine-leaves still in their autumn splendor

Only the Hacienda's chapel, its Bodega and the chimney of the kitchen as well as its ovens are not totally in ruins. The ancient Lagar winepress which was carved from Tosca where it is still attached has lost many vital parts. Make it out on the right of the Tosca building... 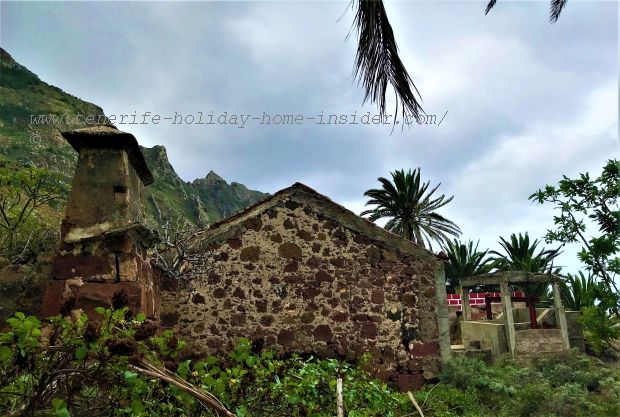 The ancient architecture of Taganana Hacienda de Conde that was built with volcanic Tosca stones by Portuguese craftsmen, more than 500 years ago. 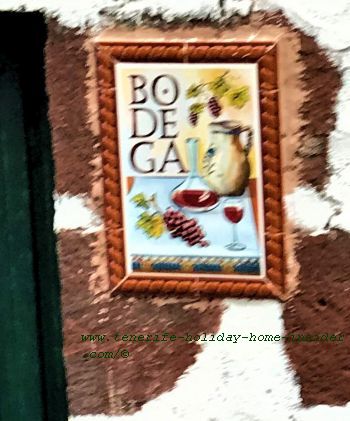 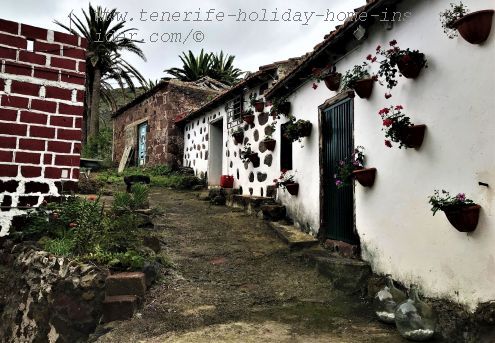 The Bodega is partially inside the Tosca rock as is the custom with the ancient lagar winepresses that were copied from Northern Portugal by the Portuguese settlers in a fashion that dates back to the days of Celts as well as to Roman replicas 200 years A.D. Many more of these presses and Bodegas abound on the slopes of El Chorro and at Tafur.

Depicted below is a traditioal Tosca Stone Lagar of Taganana in good condition that was seen at the museum Museo Casa del Vino of El Sauzal in Tenerife. 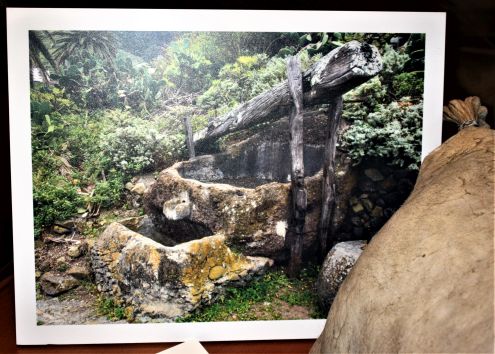 This ancient Anaga wine press once looked very similar to the Roman ones described in the second century B.C. by Clato the Elder as well as by Pliny the Elder.

Interesting in the context of wine is that a waiter proudly recommended a Rosé wine to a friend and myself when we were there at the beginning of November 2019. By the way, try to be early to get fast service,  before the tourist hordes arrive on their coach buses... 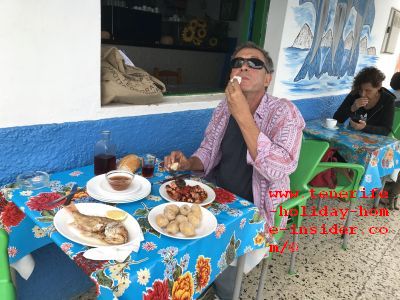 In fact, Taganana is back on track with top wine exports again with wine exports. However now to 37 countries, although on a much smaller scale than in the days of Shakespeare. Then, Malvasia wine had made the region very prosperous for a little over 100 years.  Now it's the Envinate Táganan Margalagua (a Rosé to the best of my knowledge).It  was judged as one of most outstanding wines of its category in London in 1917 by the prestigious Robert Parker evaluation with the top scale of 97 points.

None of the sugar mills that were built by Portuguese technicians from Madeira around 1496 seem to be left in the region. Mind that viticulture started only slowly in that era. However, it became a major motor of the economy from XVII onward until early in XVIII. That was the epoque  when both San Andres and Taganana were independent towns, whereas they belong to Santa Cruz again now.

Iglesia de Nuestra Señora de las Nieves was enlarged and became a rich haven of art and culture with Fiesta de Nuestra Señora de Las Nieves its main holiday in August. The Camino de Las Vueltas an ancient Guanche aborigine path was turned into a part of the Camino Real because of the sugar industry. Donkeys or mules helped with sugar and other transport. 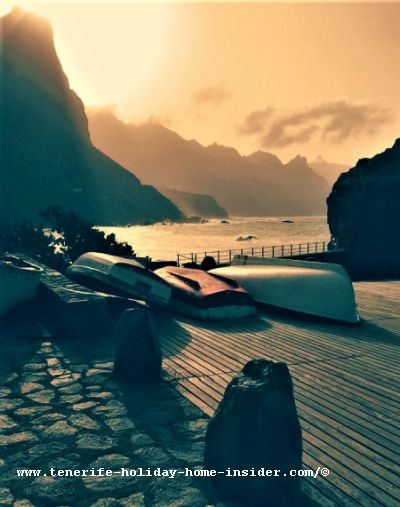 Besides, Roque de las Bodegas used to have many Bodegas which have all disappeared. Back are even more fishing boats to catch seafood for more and more Taganana tourists. Apartments for Tenerife holiday home accommodation have sprung up there as well as at Benijo and at the Almáciga surf Beach.

Camino La Chanca to return to the center of town

It started to drizzle by 2.30 a.m. on November 13 and I took a short-cut to get back from Camino El Chorro. On my walk down I noticed a sign with numbers for holiday homes in this suburb where I didn't see any ruins, by the way. 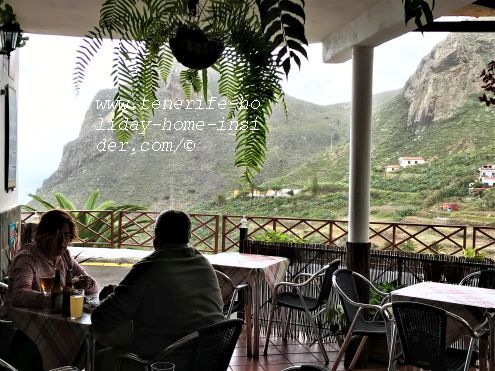 I had delicious Garbanzas chickpea soup a menu of the day, as I was in a hurry to catch my Titsa bus. No time for drinks.

The Titsa bus 946 from the Santa Cruz main bus station ends at Almáciga and stops about 10 minutes before at Taganana.
One bus leaves at 6.55, another at 10.30. Each takes about one hour. Take the TF 12 and then the TF134 via San Andres when you drive yourself.

From Taganana back to Santa Cruz Tenerife

The only comprehensive guide for the main town of Anaga I encountered is in Spanish with a wealth of data, names and numbers