Why Tenerife fires means "Son locos" or they are crazy 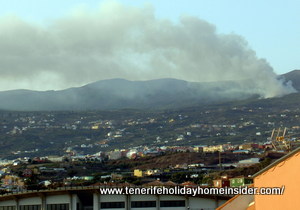 Tenerife fires are no accident said the tour bus driver in the early morning of August 15, 2012.

The Spanish speaking man added angrily: 'Son locos crazy!'. Mind he didn't use the expression 'están locos'
which would be temporary. He told me that they (his family?) had already called the fire brigade.(los bomberos) The man lives of tourism and wildfires are bad for it.

Then he concluded that there are no fire accidents in Tenerife forests.

Reasons which speak for Tenerife arson 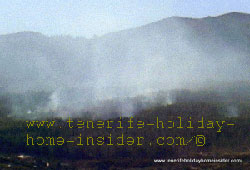 It was mad, unforgivable arson in the case of Palo Blanco. I totally agree;
i have lived in Tenerife for more than 10 years.

I could see the incredible smoke and 10 meter high flames when I took our dog to a little Longuera Park at the old La Gorvorana ruin. I pointed out my discovery to the bus driver, whose tour coach was parked there.

By 8 a.m., my whole suburb was talking about the terrible Tenerife news, when I returned home. Everybody agreed that it was arson.

Meantime, the smoke seemed to turn towards la Orotava which gave away the wind direction or a successful fire break. It is always the southwesterly which gangs up with flames to carry them to the Tenerife forests.

Settlements are too close in that area of the new Tenerife fires. Los Realejos fires have done great damage in the past. They wiped out famous art work and destroyed very important records in local churches. Certainly, people died in flames too, as did 20 in La Gomera in 1987. And that is not long ago. Gomera is part of Tenerife administration, you know...

A helicopter arrived at the fire scene by 8.30 a.m.

What made the arson worse is the fact that no low Alysian winds brought clouds to the location the night before. The location is in the mist belt which didn't exist on the evening of August 14 or August 15, 2012.

All other help must have arrived in time, as the smoke was definitely less by 9,30.a.m. 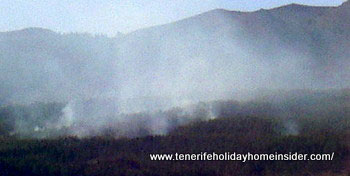 Pictures say so much

Notice those interesting facts which I caught on camera and are depicted beside.

Several fire spots could be made out just before 10 a.m. A mere few seconds later, they were not easy to count any more. All under control by the looks of it, but the helicopter and Guardia Civil vehicles are still patrolling the Monte below Teide in Los Realejos.

However, what about that most peculiar of all secrets which the photo reveals?

That's a more isolated origin of fire. Find it quite a bit away from all others. It's on the right and on slightly lower level. That can't have started to burn there by chance. The several 4-5 small smoke points which I could see just before 10.a.m. were no coincidence, either.

Quick report of Tenerife fires of 2012 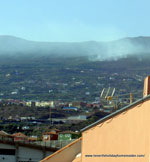 Everything looked so timed and well planned with Los Realejos fires. Tenerife fires started in July by Adeje, Guia de Isora, El Tanque and Vilaflor where close to 22000 inhabitants were evacuated. All this is not making news any more. Fire threats to fire prone Masca only just stopped. Part of the touristic nature reserve Devil's gorge burned. Accident or arson? And then there are also the recent fires of La Palma and above all of La Gomera. By August 16, the very bad La Gomera fires were still not under control, totally. The neighboring island's national Park Parque Nacional de
Garajonay is still endangered. However, an end to it is possible, as Morocco sent two hydroplanes to join another five to help the small Canary Island.

All Canary Islands will need much more fire fighting equipment due to Global warming in the future. Perhaps, Loro Park, Siam Park and other local business could make donations. Mind that Tenerife fires are a threat to almost everything.

From Tenerife fires back to wildfires in Tenerife of 2009 when Los Realejos pines burned also.