Not again Tenerife fires on fields and in forests

Tenerife fires have spread from Los Realejos to four more municipalities since July 21 of 2022 but don't mean any threat to those on holiday on the biggest Canary island. Why? Beaches remain safe and only forests and the Cañadas are off limits for all for time being.

Where exactly did the fire hazard start this time?

Again, as happened 15 years ago, the first flames originated in Los Campeches a valley of very important agricultural infrastructure near Icod El Alto where more than 300 types of potatoes became famous.

Los Campeches i.e its closest town Icod el Alto are also renown for their wheat production as depicted by the mural by Matia Mata below.  Today on July 25, my property insurance agent who has many clients in Los Realejos told me that the only problematic area to control the fires remains La Vera. No, not La Vera by la Montañeta.  He confirmed the other La Vera the region above the Barranco Ruiz. Indeed, the flames didn't travel down to the nature reserve of San Pedro and its Hacienda de los Castros. In fact,  he meant the region where "Papas and Trigo" potatoes and wheat are planted, hence Los Campeches. So why is there a problem after so many days? 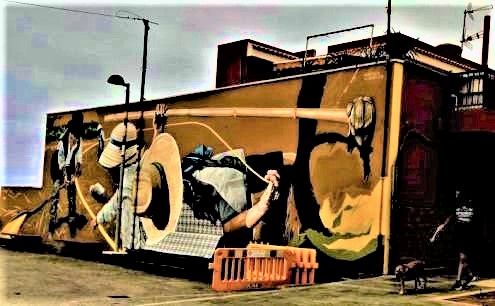 Coming back to San Pedro with one of the most spectacular views of an endemic reserve, it remains to note that this very same region also happens to be situated by one of the most pristine nature gorges, namely the ravine of Ruiz called Barranco Ruiz by the locals. Its most probably priceless, indigenous flora is still to be scientifically evaluated.

What has caused the Tenerife fires of 2022?

Police as well as the Realejos townhall people came to the conclusion that the fires are not of accidental origin. Why? They actually started in two different spots almost simultaniously. One private culprit could not have done that. One of the locations is the same which was detected during the wildfires in 2007. This too must strike us as weird.

Coming to think of Teide fires of August 2012 which also had a totally non human origin but hardly caused any damage.

Not to forget is a third area in San Juan de la Rambla which started to burn at about the same time in 2022. News report that forests with rare fauna and flora are ablaze by San José de los Llanos.

This question is hard to answer, as a sudden strong wind may cause havoc. The thick African Calima that has obscured the skies over the biggest Canary Island off lately is certainly of no advantage.

Friends who keep rescued horses near the town El Tanque told me on July 23 that so far they see no danger for their estate. The place offers riding as well as tuition. Needless to say is that scattered farmsteads are also in peril in the region just like in Los Campeches of Los Realejos the town with the oldest Tenerife church.

Of course, there are residents of rural la Orotava the Tenerife place which owned most water mills once, Los Realejos and San Juan de la Rambla the town of barroque festivals which have retreated to safe places. So far, no human casualties have been reported.

What is astounding is that so few helicopters seem to be available to help with fire fighting in Tenerife. In fact, the island has more than that. However, soldiers who were sent for assistance from the base by La Laguna the first capital of Tenerife have come to the rescue. Not to forget is the help by locals and by the fire brigade. Neighbouring La Palma has also sent a helicopter to prevent that the flames could even destroy more than almost 2500 hectares so far.

From Tenerife fires back to Wildfires in Tenerife