Icod el Alto translates as the high Icod, as it is located about 500m above sea level.

Icod Alto with its 3625 inhabitants belongs to the region of Icod de los Trigos.(Icod of the wheat) of Los Realejos.

But more than wheat is planted. 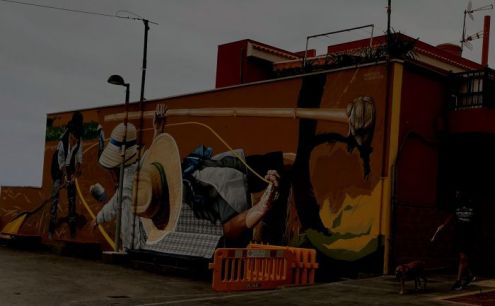 This wall art of August 2018 is dedicated to the town's  cereal farmers. They deliver half of Tenerife's entire production.

So did pigs and turkeys. Read up the unique story of el Cochinero who used mules for transport. 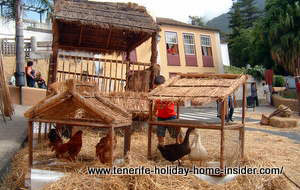 This mountain village Icod of the Trigos was already famous in the past. Its historical country inn La Pared alias 'Casa de papas' is still talked about today.

The latter is related to its famous potato history. Besides, it was on Tenerife's vital road Camino Real which was important until real tourism took off. Today, many admire this country village because of its living folk dance museum, its folk dances of Guanche origin  and because of the amazing Middle School called Colegio CEO La Pared.

Where is the region Icod de los Trigos and its top country village?

It is about 400m above sea level and 6 km northeast from the Los Realejos Church Santiago Apostle. It is on the slopes below La Corona lookout and the 'Flypa' Paraglider piste on a plateau by the scientifically important gorge Barranco Ruiz. See it with its surrounding on the center area map by the education CEO La Pared of the 'Upper Icod'. 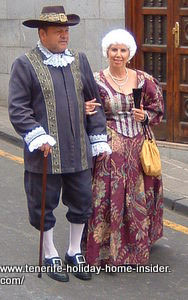 What is special about Icod el Alto?

Icod de los Trigos works towards preservation of traditions of its community in an extraordinary way.

A sense of belonging to build something together is important in our days, where drugs easily make their way into school, as today's youth are so often bored and lack community sense, among other.

Young and old join hands in a shared passion. Just like the couple of wealthy landlords who are dressed in custom clothes. 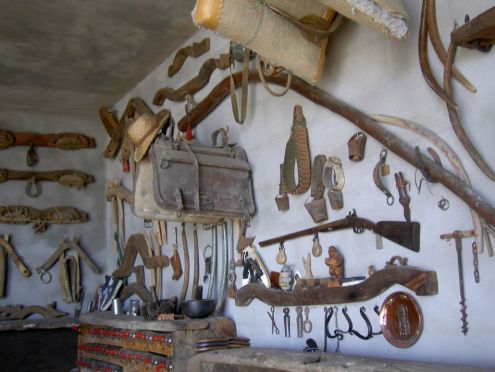 Obviously an appointment is needed to see the unique collections of ancient customs of the mountain village of Los Realejos. 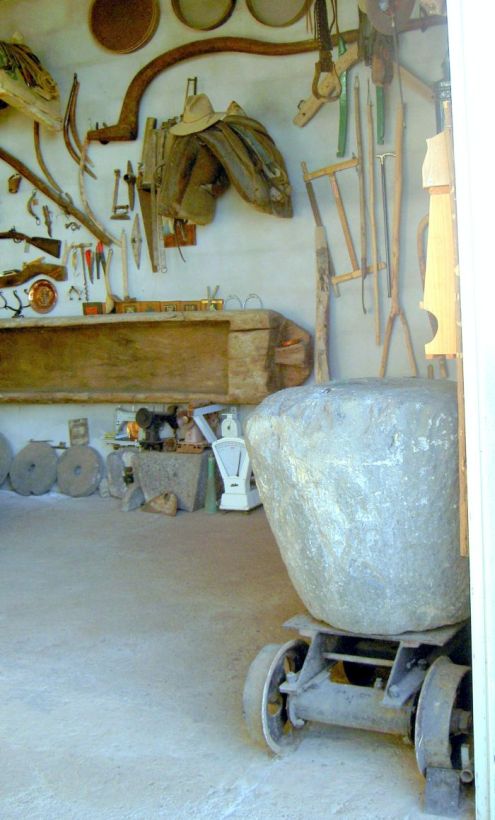 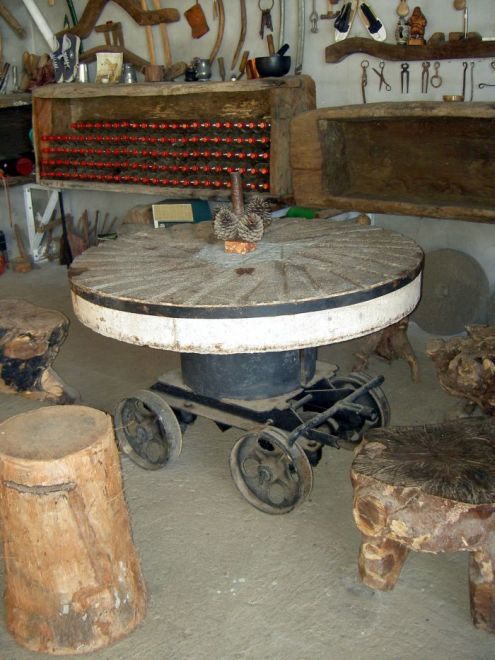 Rail transport wagon of water mine.

By the way, its  historic, abandoned treasures also comprise a couple of rail wagons for traditional water mines of the biggest Canary Island. 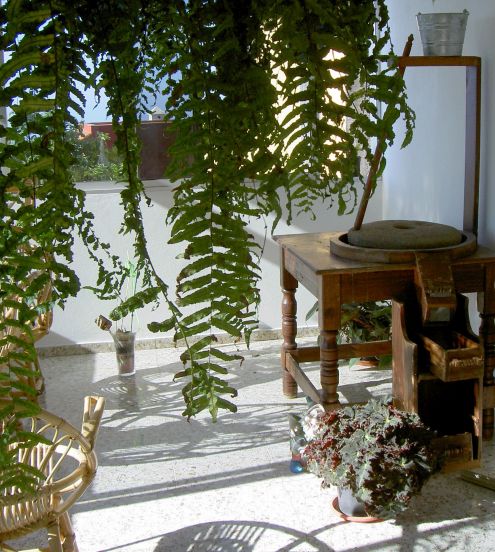 Then,  there's the antique mill grain grinder  that's depicted above. It can still be used to crush Gofio coarsely. 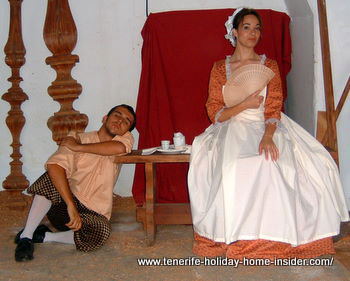 Folklore at Icod of Los Realejos.

One of the town's most loved people is the charming school teacher Carmen Nieves Luis Garcia. She is a Tenerife celebrity who is even known in academic circles on mainland Spain.  Alzados for Folk dance with the Alzados of Icod de los Trigos became famous thanks to Carmen the musicology expert.

Mrs. Nieves Luis Garcia has a proper musical education and is a graduate in musicology as well as in history. Her passion and expertise makes her the perfect folk music coordinator together with the family Los Alzados to engage almost a whole town for folklore in one way or the other.

Then there are intriguing Guanche caves by Icod de los Trigos with information about the customs of this Tenerife people before they were conquered. 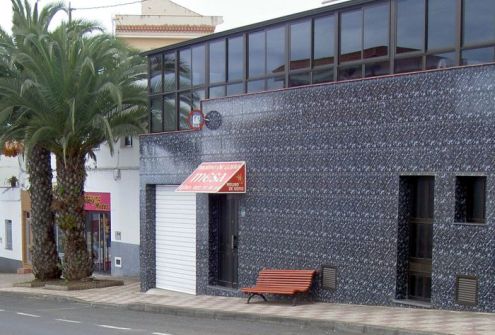 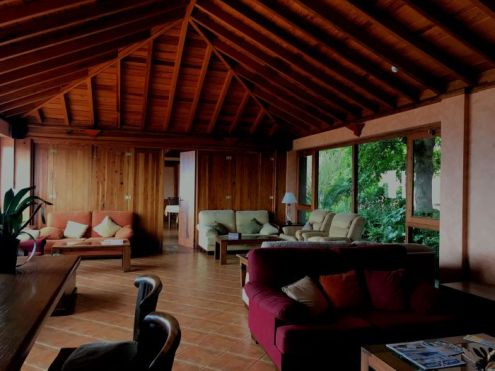 Hotel rural Casablanca Icod el Alto Tenerife communal lounge with large terrace of ocean view
This luxury country hotel has several beautifully landscaped patios with independent cabins. Lush subtropical gardens also surround a large glassed-in indoor swimming pool. The hotel is partly surrounded by very high walls as well as by a jungle of impenetrable blackberry hedges. This hotel allows to bring medium sized dogs. It would have accepted ours, about two or three years ago. There is parking outside in a very quiet one way street. 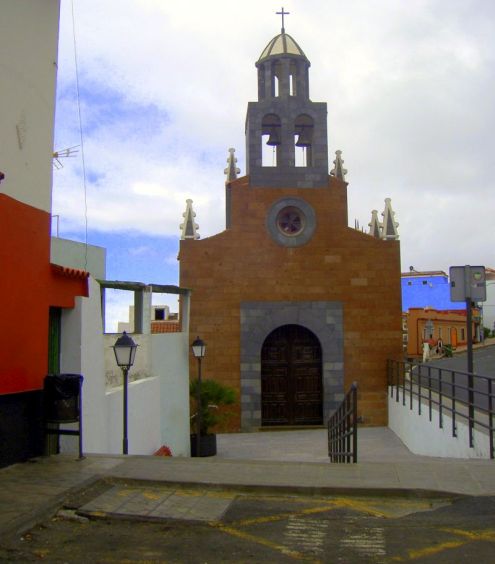 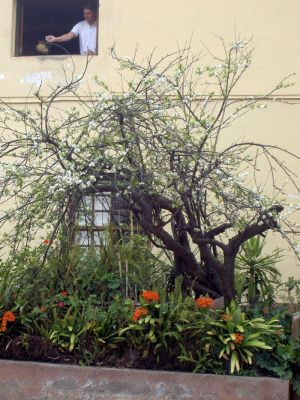 Indeed, Spring is more prominent in Upper Icod of Los Realejos, as temperatures are at least 5 degrees lower in Winter than by the coast. However, frost is unheard of. Fruit like peaches, abricots and plums grow there easily.

Discover Icod Alto property rental of apartment Bentor of Icod el Alto near Puerto de la Cruz for Tenerife holidays for you, your kids and your dog. Of course, you can also rent long term. The latter is also the better option for somebody with school going children.

As said, the country village of Icod de los Trigos is a good choice for a new life.

A more cozy Icod Alto apartment rental in the same country home is available. Old traditions have become Spanish customs in the close vicinity of its fairly new villa where free Internet is an option.

Spanish celebration with or without Guanche flair.

The main town of Icod de los Trigos loves to party. There are 7 Spanish celebrations, some of which with Guanche influence. 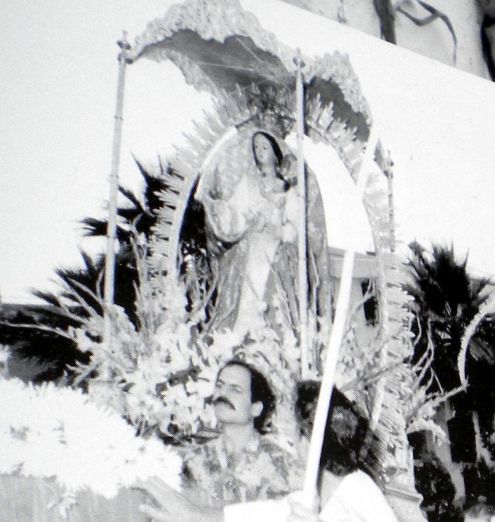 The biggest fiesta besides Christmas holidays, Easter and carnival is at the end of summer. It takes place between the last week of August and the first week of September with a Thursday for free food and drink.  In 2011, 700 kg of meat were fried and given out free together with potatoes, bread and thousands of liters of local red wine.

Icod de los Trigos is an old farming community which dates back to the islands first settlers just after 1496. There, several wealthy people live. Some own hotels and apartment blocks in Puerto de la Cruz. The vice mayor of Los Realejos also has his home in Icod el Alto.

By the way, the settlement of Icod el Alto is not marked in one of my large Titsa bus maps. It should be just before La Guancha.

I have pinpointed it with a large red dot. Therefore just now, find two Tenerife maps where one includes my important scan of my corrected or extended Tenerife map for Tenerife transport Titsa. This map also pinpoints the highly interesting night bus nr. 391 via Icod Alto as well as the regular bus nr. 354.

From Icod el Alto back to Los Realejos