No group dynamics of folk dance were and are possible without the right leadership. 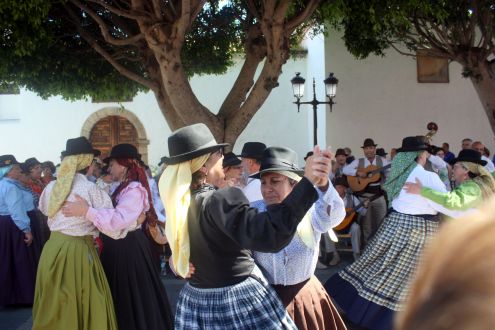 Its academic leader who is a mainland Spain graduate of musicology doesn't only have the certificates and expertise for Tenerife Spain. She also has the passion, charm and charisma to excite many. In this case, it is almost the whole community of about 5000 inhabitants of Icod el Alto and its school Colegio La Pared.

Then there is the family Familia Los Alzados who is famous for Icod folklore and dance. It was traced by Carmen Nieves Luis in the 1980ies in the context of ethnic musicology.

That small group of devoted family traditions isn't only of Guanche origin and Alzados history. It also has the affirmed blood of Menceyes to show for, thanks to the help of La Laguna university research. Menceyes were kings of Guanches, while Alzados were rebels.

The Tenerife Alzados had no Che Guevara. They never employed real guerilla tactics, either. However, they caused big head aches to the Tenerife Cabildo from the middle of XVI onwards until early in the XX century. This may be learned by Guanche history, of cavemen of the region of mount Teide. Also, the Los Alzados kept a proud community spirit against all odds.

In fact, the family Los Alzados achieved much greater social values in this particular case by a proud group spirit which they kept. They contributed to Spanish customs by bringing in an element of gay and happy ethnic dance and a rather exotic, ancient music which they have kept alive over the centuries.

Now, the middle school La Pared is proud to have a living museum of folk dances which is preceded by Los Alzados at the small farming community of the once famous Camino Real Tenerife. Actually, pared means wall in Spanish. The colegio (middle school) of that name has a very long one. Everything typical of folklore of its region Icod de los Trigos is framed there as message of traditional values for posterity. Besides, Tenerife and Peruvian potatoes as well as exceptional historical country inn hospitality are also connected to the term la Pared.

Almost the Realejos Upper Icod's entire country village contributes somehow to the hamlet's folk dancing. The tuition of music and song is directed by the family Los Alzados and the music teacher Carmen Nieves Luis. Certainly, fans from other hamlets of the Trigos region have joined folk dance forces. The group dynamics and the energy released by example of Carmen Nieves Luis and Los Alzados is simply too strong. It draws fans and traditional dance exchange nationwide, as well as overseas.

However, a recent 2011 folklore festival with dancing of El Medano Tenerife didn't mention folk dance of Icod el Alto. Reason for it was certainly its timing, as it collided with the biggest celebrations of Icod el Alto which always take part at the end of August and beginning of September.

From folk dance back to Los Realejos where folklore is promoted most.

Every year, Los Realejos Alto stages folk dances for all 7 islands of the Archipelago, such as on May 31 at 9p.m., 2014 on Plaza Viera y Clavijo in Realejos Alto.

Clicking the free Plus One is merely to show that you've liked what you've read.


Interesting blog about Realejos Tenerife dance and folklore which is worthwhile translating into English.