Guanche folk dances compared to other Spanish traditions in Tenerife 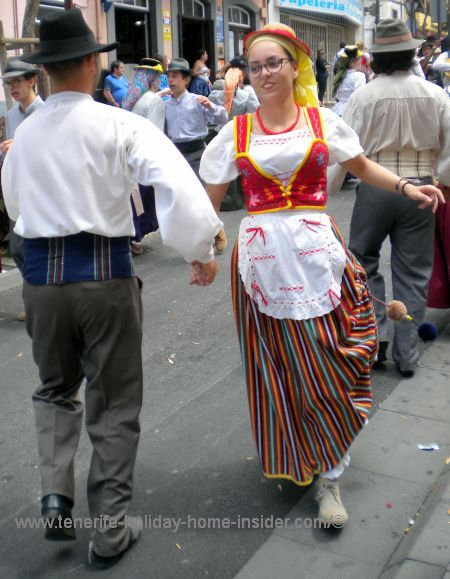 Folk dances in the street in La Orotava 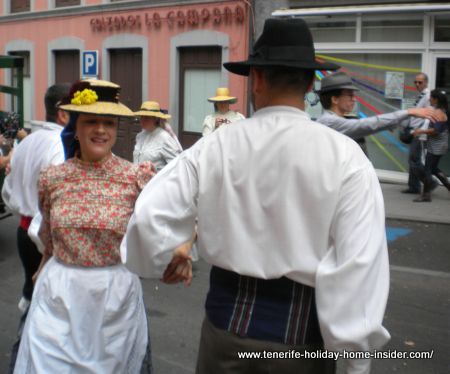 They have moved into the scientific limelight of musicology, anthropology and Tenerife history in the country village Icod el Alto which is part of Icod de los Trigos Los Realejos.

Learn more about it in the context of ethnic dance group dynamics with Carmen Nieves Luis and los Alzados, just now.

Musicology studies of Tenerife folklore by Carmen Nieves led to profound, academic research of ancient Guanche folklore and religious cults, such as their folk dances of Tajarastes, Tanganillos, Saltonas, to name just a few. In fact, it would have been great to trace the book by Carmen Nieves Luis to learn more about it. However, this academic literature seems to be out of print or sold out right now.

I am excited to show you the following video with young attractive people from Tenerife who are engaged with typical music for traditional Seguidillas and Saltonas. Most of the young ladies and men are extremely talented singers, as you may notice. So sorry, this video has been removed and hopefully I will find it for you somewhere else. Its replacement is a compromise but seems to be related to the Gorgojo, at least.

The Gorgojo of folk dance of Tenerife

By the way, I like the music of the dance of the belts (danza de las cintas)
more, as it is interpreted now.

The most startling characteristics of Guanche ethnic dances and folk music

The said folk music and traditional activities have a very happy mood in general. They are not dramatic and sad, as is so often the case with Spanish Flamenco music or, as may be in the Portuguese Fado folk songs. Also there is nothing gloomy about the style of the Guanche folkloristic dances. The choreography is adapted in an easy going fashion.

The language and lyrics are very often very simple and have refrains. This is common with children songs and their poetry.

Indigenous dancing of Guanche origin is often based on devotion, such as for the goddess of love, fertility and good crops called Chaxiraxi. The Guanche main god was Achanán. Chaxiraxi was later replaced by the Black Madonna, more about whom learn here. Much about her was reported by a Franciscan monks who plotted her discovery by a beach.

The ancient dances of the Guanche were synchronized to fit the idol of the new cult which could be molded by Christian standards of Tenerife's church. Nevertheless, the carefree and easy style of the chants and dances were most probably hardly altered. Fundamentally only, the language changed.

Archaic musical instruments of the Guanches, such as Chacáras, dictate the rhythm and give those Tenerife dances their exotic appeal. They could be nicely adapted to those of Spanish customs, while the small string instrument Timple is typical for the Canary Islands. Then, there is the lute. Its use with the native island dances of Tenerife is rare. Spanish guitars may appear, though.

Guanche folk dancing and celebrations create playful mood, a time to relax and forget hardship of labor, contrary to many celebrations which are based in Spanish custom which remind too much the intimidating aspect of the Middle Ages, such as Easter plays in La Laguna and many others. Of course, it is to be respected when a church points out sad happenings as part of its history.

Festivals which are extremely likely to have been fused with Guanche cults are merry affairs and mean party times . That's the case with Romerias which coincide with old Guanche calendar rituals during solstices or ancient Guanche sports events and where free food and drink is the norm.

By the way, folk dances are also part of Tenerife May holidays in the capital Santa Cruz de Tenerife.