Tenerife Information with special tips is here to help you to understand Titsa bus transport better and how to get it often much cheaper. It also informs you about invalid links of Titsa, such as to apply i.e.to buy the normal Tenmás card online which is not possible any more, unless for those special cards for residents.

How much can you save with Tenerife public transport now?

To be honest. Much has changed in the last years but above all in summer 2018.

You can't use the old Bonobus card any more. It has been suddenly stopped in September 03. Most probably, a poster I spotted a few days after the deadline by a bus door had been put up, a few days prior. The machines in the buses are shut now. You read on them Bye Bye Bono Via instead. A crossed out picture of the old card is next to it.

Mind that you cannot buy Tranvia fairs inside the tram with cash. Only pre-payment with Tenmas or by mobile app schemes are possible. You can pay cash or by Tenmas in Guaguas.

Special schemes for special people and distances are available by Titsa apps online. Since 2019, residents may apply for a personal 47Euro/month Bono Resident card first online and then at the bus station ticket counter.  This resident Titsa discount bus card is for all Canary Islands and all its bus and Tranvia transport. It may be used for any tracks at any time, as often as needed within one month. There are more discounts for the elderly now since February 2019. Get them with the so called monthly Titsa card Abono 65 plus for seniors that are residents  Unfortunately, there are no discounted fairs for tourist pensioners, unless they are Spaniards. 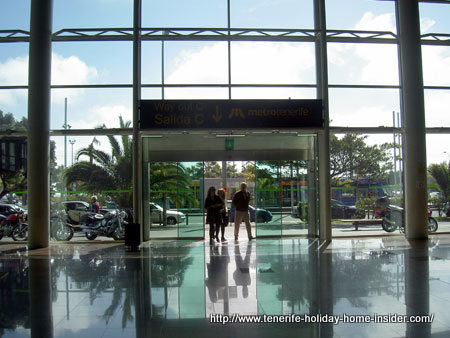 A Titsa information office is on its upper level platform. Friendly staff helps you with best of tips there. By the way, it was closed in July 2018 when last I passed there, as major road works were done by the top platform. I even had to catch the bus to Puerto on the ground floor.  By now, it is probably open again.

The cost of public Tenerife bus transport before and now

There was no set amount of fares on the Bonobus card. Its time limit to use it was one year, except with monthly cards, contrary to the new Tenmás card where only the prepaid credit can run out. The dead line to exchange bonobus cards was October 31 of 2018 at bus or Tranvia offices.

How was the previous Bonobus card working?

Going and returning to the South airport from Puerto Cruz may almost have used up one card of Euro 15.

You had to employ the card with the machine until the driver told you that your credit was short. Than you had to pay the rest in cash to him.

The most modern way is with a smartphone app that you show to the bus driver. A Norwegian friend told me that it sounds like the bus Oyster system that he has in Oslo.

Tenerife information on public transport and the Recession

Many discount schemes are around for residents. Above all for local families with children.

A Bonocard elapsed at the end of a year. Therefore, you had to come back on holiday before that or you had to buy a new one. That wasn't possible at the airport, though.

I noticed that bus fares in Santa Cruz the capital are cheaper than in the rest of the island. Also there, pensioner cards may still be applied for. This makes staying at a holiday home also more interesting, even if you stay by the beach Playa de las Teresitas in San Andres. Mind little San Andres that is packed with superb restaurants, cafes and bars is part of Santa Cruz.

Also, there you can use both bus and tram with so called Abono cards, Tenmas cards and by smartphone payment. Take the tram which stops just short of the North airport, as it has free Wifi.

The heart of Titsa in Tenerife

It's the station in the capital Santa Cruz, while the administration offices as well as the bus workshops are near the North airport of Los Rodeos in San Cristóbal de la Laguna. Puerto de la Cruz will soon have the second biggest station again, as construction as started in 2018. 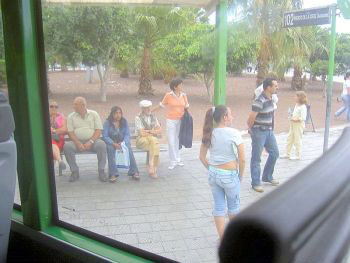 All kinds of cosmopolitan Tenerife people pass through the main bus station in Tenerife's main city. The photo is a little blurred on purpose as I don't know if people would like to be recognized by their faces. I cannot run that risk, as I live here mostly.

The most common Tenerife information service on Titsa

Bus services are very good for the island, except in the early morning hours, late at night and on top holidays when no vehicles operate. Buses may be crowded during summer school holidays, although beach bus lines are added.

Usually the earliest buses start by 6 a.m. and the latest go by about 11.30 in the night.

Now, the new time tables at bus stops are pretty much more reliable. Some of them also have electronic boards that give expected arrivals. Best news are that people with smartphones and Internet access can now call up arrival times by introducing the bus stop number at  movil.titsa.com in the search engine.

Generally, nowadays, I used to encourage my children to rent a car when they come for holidays and want to travel all over the island.

However, traffic congestion has become a problem by 2019. Pollution may also play more of a role.

Nevertheless, petrol and diesel fuel are still relatively cheap. Also, the moment you join up with a few friends your trips work out more economical than by bus and you are independent. Sometimes, even a group taxi fair is cheaper than a Titsa bus.  The most awkward are Teide trips with Titsa, as there are  very few of its buses on this track in mornings and afternoons only.

However, much has happened. There are news for frequent bus travelers to save much on expenses by bus. Download the Titsa app for your Android smartphone to get all sorts of cheaper Tenerife bus and tram fares.

Or return to  the Tenerife page here...