Tenerife living was perfect for German born Richard while he was in good health. So, he always said.

Suddenly, the situation changed. He was diagnosed with a rare lymph cancer while on a family visit in Germany.  He had never felt anything to warn him and it was for the first time in his life that he had a major health problem. Eventually, he had some treatment in Germany, after friends and family had suggested it but went back to Tenerife soon after. 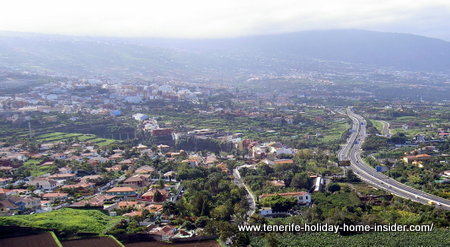 Richard loved his life at sunny Las Cuevas in the Orotava Valley  on the largest of all Canary Islands  by Puerto de la Cruz. He had a beautiful villa which he had initially bought as his holiday home in Tenerife with ocean views. There, he had settled permanently when he retired. He became even more attached by creating a beautiful garden and after remodeling his new home in a similar fashion as had been done with another Tenerife villa renovation. 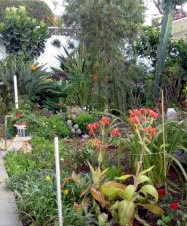 Tenerife garden by a German retiree at Las Cuevas of la Orotava.

Also, he was in love with Tenerife. His frail body couldn't change such feeling after the cancer had hit him. Besides,  Tenerife living with its good climate was much better for him than the harsh Northern Winters which he had always hated. Richard, managed to locate a good Tenerife oncologist and went ahead with surgery and chemotherapy. Negative stories by locals who tried to warn him fell on deaf ears.

Tenerife living a motto for Richard 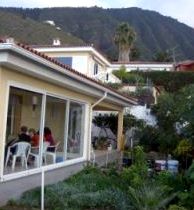 Richard called the operation by the Spanish surgeon Dr.Morales a great success. It had been done at the Santa Cruz University Hospital. They had removed his malicious tumor. However, it eventually came back. Once in a while I phoned him up. He was as happy as a man in his late sixties could be. Some friends and I joined him during his latest birthday party on his veranda.  He had no complaints, except the one that follows.

Differences in health care not to be taken too serious?

Delays seemed long at Hospital Candelaria Santa Cruz waiting rooms, until Richard could have his three hour treatment. The situation was aggravated as the twelve chairs in the room couldn't seat all the patients. Would that really never have been tolerated in Germany? But Tinerfeños couldn't care less. They were just chatting happily. Richard added: "Unfortunately, I didn't understand a word. I so much wish I had learned Spanish' for better Tenerife living".

Richard said that several Guaguas (public buses) stop outside this hospital  by the TF5 that some locals call the La Laguna hospital.

Later from 2012 onward,  ambulances took Richard back and forth to cancer check-ups at the very same University Hospital Candelaria. Discover some interesting news by Richard which regard drug costs in Tenerife, while other tips about  health care in Spain for tourists and expats are included for better Tenerife living.

The end to Tenerife living of Richard

In 2013, Richard was not doing well. Suddenly, there was no more telephone connection. I didn't pursue further. It would have upset me too much. He was so brave and so positive. All he said all the time was how lucky he was to be able to go on living in Tenerife. He would tell me how nice his view was and other beautiful observations. Good old Richard...

From Tenerife living - Richard back to Living in Tenerife with insider tips on Tenerife life and retirement.