The Tenerife Semana Santa (Holy week) before Jesus died for all humans on the Cross is when Catholic faith peaks on the biggest Canary Island. Indeed, this last week of Lent or Cuaresma is more important for Catholics than Christmas. 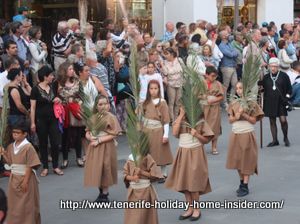 It starts on Palm Sunday (Domingo de Ramos) or even the Friday before and ends on the Sunday of Resurrection (Domingo de resurrección) which is also called Easter Sunday or Pascua in Spanish.

Most Tenerife Catholic congregations have at least one daily procession with church service in the week before Easter.  More are in the capital, in San Cristóbal de la Laguna, in Candelaria, Garachico, Güímar, Puerto de la Cruz and in Los Realejos.

On Friday Santo and the day after,  no real mass is held, as communion bread will be kept back for those days from the Thursday of Christ's last Supper. The holy communion sacrament dates from this event.

Check the Easter week agenda of your nearest church to find out all rites.

These Easter traditions played a big socio-political role since the Peace (La Paz) declaration of Los Realejos of 1496 that marked the end of an ugly war. Why? In fact, the new customs also had to replace the cults of the indigenous conquered Guanches. 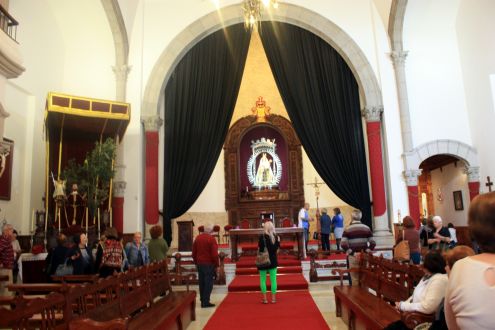 The Tenerife holiday home insider attended Realejos church services at 9.a.m. on Wednesday 12 of April of the Holy Week. This was at the extraordinary Church Iglesia de Nuestra Señora del Carmen at San Agustin where the Virgin Mary shrine takes center stage at the altar. 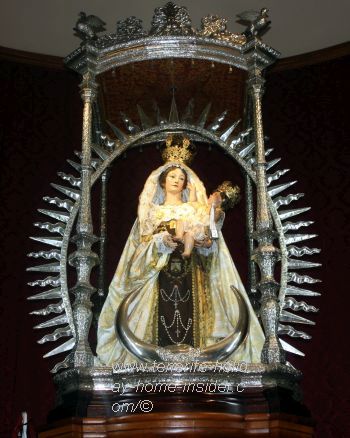 In 2015, this Catholic congregation of exceptional faith was granted the title of Marian Sanctuary by Pope Francis. Its celebrations in the honor of our lady of Mount Carmel  go back a very long way and are of outstanding importance.

All 800 seats of the Church were taken on this Wednesday before Easter on April 12.  The sides and the back of the temple were lined without gaps with more worshipers.

Four priests were directing the ceremony. This is utterly amazing compared to Christian churches in Northern Europe, many of which have been abandoned.  There, such temples have often been turned into hotels, libraries, community centers, you name it.

Other Tenerife  Catholic Sanctuaries, such as the Christ Church of the former capital La Laguna and the Basilica of the Virgin of Candelaria may even have more devotes on and in the days before Easter. 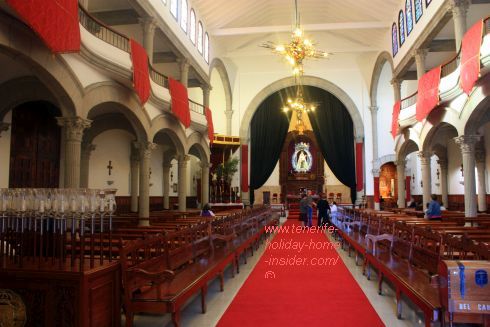 Red drapes that represent the blood of Christ were on both gallery balconies of this big Realejos Neoclassical church. By the way, they also hang from window sills outside on some houses in La Orotava on Easter Sunday. 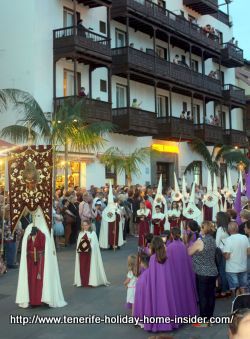 This  Easter street entertainment in Adeje of popular Spanish traditions is drawing more spectators every year.  However,  sun, beaches and Spring flowers in the mountains, forests and by Mount Teide also attract many tourists during the Tenerife Semana Santa.

Not only flights from London of the UK to Tenerife South seem to be booked out fast, lately. Also airlines from Madrid and other European airports send more Easter week visitors.
In 2017, the Tenerife holiday home insider was traveling back with Monarch Air from Gatwick LGW on Palm Sunday.(Domingo de Ramos)  The aircraft was so full that she almost had to check in her hand luggage. Many young as well as elderly people and entire families were on the flight.

Most of them are known to opt for beach holidays in Tenerife South. However, many were in Puerto de la Cruz as well. A friend told me that driving her car there during the holy week was rather chaotic. 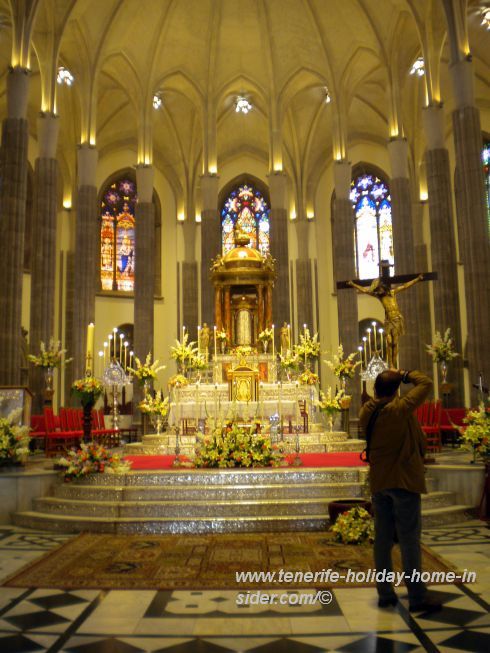 A must attend is a Tenerife Easter Sunday mass at the island's cathedral at San Cristóbal de la Laguna. Admire its beautiful flower decoration above. Be there at 11.00 to be on the safe side, as last year's schedule for 12.00 was cancelled in the last minute. 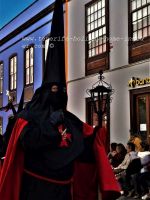 They are the Tenerife Semana Santa Magna Procession at 17.00  as well as the silent one at 22.00.

By the way, San Cristóbal de La Laguna has awarded a gold medal to the Cofradias (Guilds) and Brotherhoods that have become so famous for one of most impressive Good Friday Magna Processions besides those of Sevilla on Mainland Spain.

It's best to go to your nearest tourist office for detailed advice for Semana Santa events. Photo material which is generally also available in English is another plus.

From Tenerife Semana Santa back to Los Realejos