About Canary Islands weather
by watching it 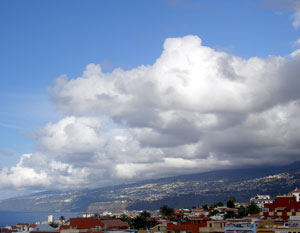 Depicted is view from my apartment to sunny Puerto de la Cruz bay.

This is important, as Television Canarias Tenerife News said, it was going to continue raining in all the Canary Islands at exactly 14,56 on the same day. Even at lunch time just a little after this statement, I took another photo from my home in
Los Realejos. It shows blue skies and sun seen from my balcony. The photo is named View Island La Palma and I took it at 15.05 p.m. before the first picture shown in this page.

Why all this fuss by me?

I would like to prove misconceptions spread by Canary Island weather reports, forecasts and above all about misunderstandings people gain about weather in Tenerife North, namely the area of Puerto de la Cruz.

Canary Islands weather may usually be taken for granted as being excellent, ideal and very stable. However, we know from the Bible that weather has its cycles. It shows different patterns from year to year or rather in extended periods.

Do you recollect, where Moshe (Moses) advised Pharao Ramesses to collect grain to save in stores for the 7 meager years, a rather long dry weather cycle?

The Canary Islands are not far from Egypt, which was once country of the great pharaos. However, Canary Islands weather is much more unpredictable and impossible to forecast exactly, contrary to Egypt.

The Canaries' weather depends on Elysian winds, currents, the nearby golf stream, its closeness to Africa and last not least on global warming caused by the ozone hole and much more.

Winter 2009 and 2010 brought much heat, as was rather unusual. Temperatures were often high up above 30C in the sun, while only about 19C in the shade during day hours. Nights were not much colder. How use this to help you during vacation or while living on the islands of the Canaries?

Generally, Canary Island properties have no built in heating. The holiday home in Tenerife may be even more vulnerable to temperature changes, as an example. Why: It is often in modern concrete buildings. Their walls absorb cold fast and present little protection, as they are often thin also.

Solution to fight off any cold from outside

Use a stand alone heater on cooler rainy days or nights to prevent catching a cold while sleeping. Do this to warm up your walls. Once a room feels dry and less cold, switch off the heating appliance.

So much to living with general weather of the Canary archipelago...

What is interesting is that even weather and climate on its different isles can vary very much.
For that reason, never rely totally on weather forecasts!
Even geographic conditions play a role within an island, such as Tenerife, which is a microcosm for different weather conditions. Learn why the weather of Tenerife is not the same everywhere...

How plan your Tenerife holidays according to Canary Islands weather forecasts?

Incomplete television News on weather in Tenerife by an example

Spanish news March 26, 2009 of a Tenerife broadcast in television showed the Canary Islands virtually flooded with rain. They were reporting on it for several minutes. One was under the impression of seeing an absolute deluge everywhere. This reporting made me angry, as it was incomplete and therefor not all true. Flooded streets, people with umbrellas, overflowing gorges called barrancos in Spanish, clouds of all formations, you name it...

Exception was one of the Canary Islands, where people were shown on sunny beaches. I forgot, if it was Island Fuerte Ventura or Lanzarote.

What I do remember is that Puerto de la Cruz, Tenerife North was not shown. That's where I stay. No rain was there...

La Laguna, the 2nd biggest Tenerife town made news in the heavy rain context. Tenerife south with Playa de las Americas, Adeje and Arona was mentioned to have suffered from rainy weather. This is true. My friend Guenther Dahmen was in Los Silos as well as in Tenerife South yesterday. He said it drizzled a bit there on 26th of March 2009. 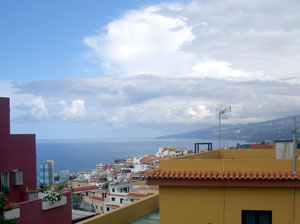 Puerto de la Cruz which was sunny on March 26, 2009 was never shown. My neighbor was sunning herself in her bikini on her balcony by lunch time. I called her there, when we had the electricity power cut, due to so called bad Canary Islands weather. She went to look and confirmed not to have electricity in her home. Just like me...

I could see blue skies with some picture book clouds at that time when I looked down to Puerto Cruz and Realejos Bajo from my veranda. The skies and all the rest looked similar to 3 p.m.conditions on March 27th, 2009. My fantastic view of the whole Orotava Valley betrayed, yet again, as so often in the past, wrong Canary Islands weather reports or weather forecasts for Tenerife North as well as weather facts.

Look at today 27th of March 2009... My view shows sun all over the Puerto de la Cruz region. My thermometer inside my apartment gives me 19 °Celsius.

August 2010 and 2011 was known for the Pansa del Burro by Puerto de la Cruz but, mostly more inland by the mountains of Los Realejos and la Orotava.

Why such an expression to describe the skies?

The Pansa del Burro represents a big grey stubborn donkey which doesn't want to move. Of course, it didn't prevent warmth but camouflaged the sun quite often. One reason for that big grey cloud is the lack of strong enough winds. Certainly, the Canary Islands weather was certainly similar on its other isles, except for parts of Gran Canaria, Fuerte Ventura and perhaps Lanzarote.

Summer 2012 in the Orotava valley

No Pansa de Burro but, brilliant blue skies and hot dry sun mostly with temperatures that sometimes reached 30 degrees Celsius, in the late afternoons. In fact there was no shifting either as the whole Puerto de la Cruz summer has been extremely sunny and blue skies. Ideal weather for picture taking. Such Canary Islands weather is what I remember from my first years in Tenerife after arriving in 2001.

Dog walking weather in the Canaries

However, my new renter of end of August 2012 of the Tenerife apartment which is in the 10th floor of a big hotel is very happy. He remarked on it being a bit 'fresco' which is fresh or cooler in the mornings. That gives me a chance to take our dog for rather pleasant long walks, by the way. 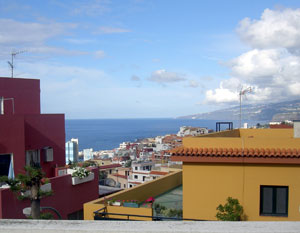 Again, the next shot, taken of Tenerife North Puerto Cruz 5 pm weather matches the first photo on this page. when you study the cloud formations on the left.

Yesterday, I phoned my friend Lourdes and asked her, if she had electric power. She said, she hadn't and that electricity stopped due to lightening. We had heavy lightening around Puerto de la Cruz during the night 26th to 27th of March, but nice sunshine, when I walked outside early in the morning. This was the only Tenerife weather forecast which worked out to be true at that time.

My Tenerife television News 27th.of March 2009 time 14.56 hours just said again "Sigue lloviendo en todas las Islas Canarias" which means, it's going on raining in all Canary Islands. This is nonsense. It's not true; we had fantastic weather around Puerto de la Cruz, as my photos in this page show. It is clouding up a little, as happens so often lately in the north, by lunch time. However, this is bad reporting on the weather truth. How can you trust any Canary Islands weather reports if you cannot trust the local Media which generalizes even in Tenerife News TV. 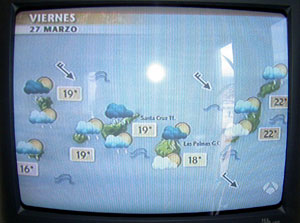 Here a screen shot of my old TV, where weather forcast Canaries was shown for 28th of March, tomorrow. Don't blame me, for not believing much of it, after all my Tenerife weather experiences. Why should I be worried anyway? I live in Tenerife North. If I planned going to the south early in the morning I would search for a Webcam of South Tenerife in Internet. That's the only way, which tells the truth about weather on any of Canary Islands, at least for the present.

Why so many recent news broad-castings on Canary Islands Weather?

Reason being for the hot news on weather in Tenerife was and is also yesterday's Tenerife economy crisis. It was caused by cut electricity supply on the whole of the biggest Canary Island.

This lasted about 6 hours and caused havoc in Tenerife.

Mr.Dahmen told me, a lady tourist came out of toilets in the south (where he was) and said: "What's wrong with services in Tenerife? You don't even get toilette light in an expensive restaurant!" An electricity cut like yesterday's caused by Canary Islands weather can do much damage to Tenerife tourism. In fact the lack of electricity everywhere was to blame for an economy crisis for a whole fatal day. Yesterday broadcasting about it had not stopped during the 27th of March.

However, in my mind, Canary Islands weather forecasts and weather reports are often incomplete. Tenerife North with Puerto de La Cruz is often forgotten. This harms its tourism, of course. Tenerife is not only Playa de las Americas, Tenerife West coast and the capital Santa Cruz, you know... The oldest Tenerife resort, which is lovely in my mind, merits more weather report priority.

Hmm, 7pm 27th of March 2009: Puerto de la Cruz suddenly portrayed black clouds with white clouds and sun around it. It started raining heavily at the same time. This was called Monkey's wedding weather in old Rhodesia. Now at 7.30 p.m. weather forecasts look like they were a little correct. Only, times during entire days regarding all regions within all Canary Islands don't seem to be predictable.

Heavy storm warning was on the agenda for most of the Canary archipelago. Tenerife was hit badly by winds up to 200km in the south of the island. The result of it was no electricity in Toscal Longuera for 10 hours, while temperatures had fallen. Also, the region of the Tenerife capital with La Laguna suffered heavy winds and rains. This region as well as the south are most prone to stormy weather, while more heat is the other extreme. Ask locals, where weather is more stable on the other Canary Islands...

Take this into consideration before you rent o buy a holiday home in Tenerife or on any Canary Island. And mind that the recent changes of Canary Islands weather have 2 sides to the coin.

West Africa with its coastal countries near the equator as well as the Sahara may bring Kalima from the African desert and cyclones or other hot air storms, which could only be diminished by a reduction of global warming. Cyclone Delta of 2005 and the cyclone of 2010 are a typical example.

From Canary Islands weather back to climate in Tenerife

A weather prognosis by MSN for the European region. It includes Canarias the Canary Islands but only shows Gran Canaria, while the emphasis is on climate hence overall temperatures.