Fiesta de San Andres with all sorts of thrills

Fiesta de San Andres a town church patron holiday is better known as a worldly celebration on Tenerife, as Bodegas in its Northwest are opened on November 28, 29 and 30 and the chestnut harvest coincides with it. 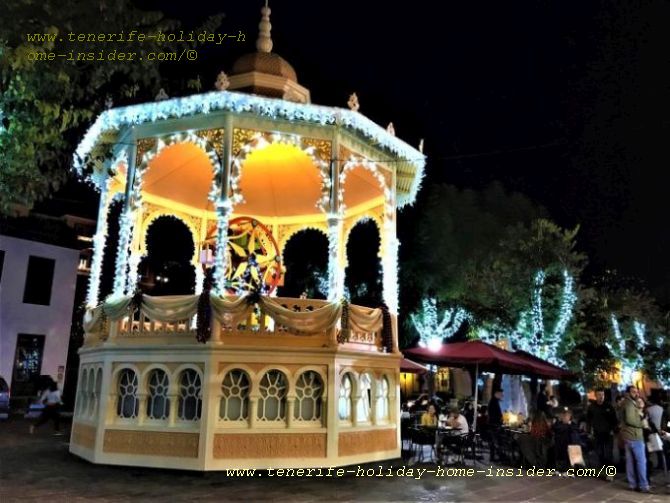 However, mind that Puerto Cruz, Orotava, Icod Los Vinos and La Guancha have additional attractions on those days, as described just now.

Visualize it in a cobble street with rustic looking braziers and red hot glowing flames. Earthen ware pots with holes on the bottom stand on top of the tall ovens. The roasted chestnuts inside smell tantalizing tempting. 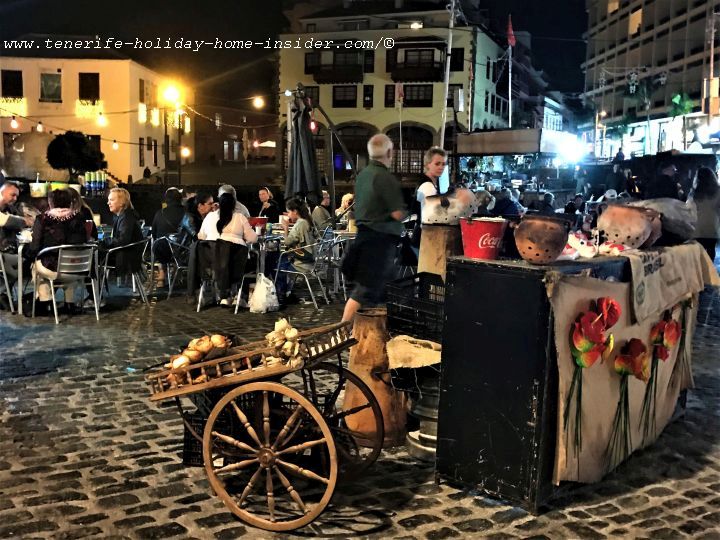 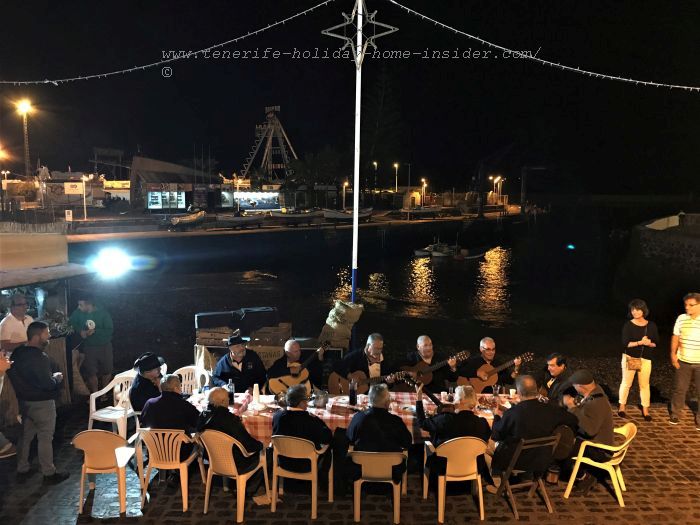 Fiesta de San Andres with elderly men by the seaside who celebrate in retro style by a long table with wine, chestnuts, guitars, and singing songs 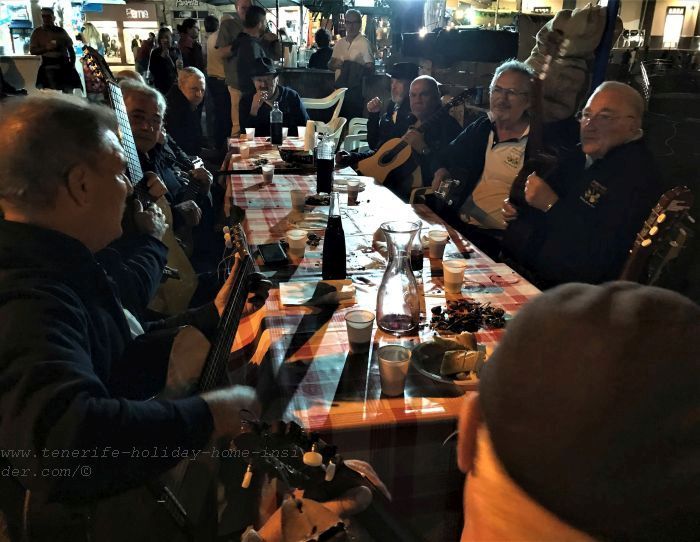 Fiesta de San Andres local, cheerful musicians most probably from a fishermen guild who are dressed in black suits, some with hats

Those dignified looking men in the image also sing some cheeky folk songs which are part of the local culture.

Again, not to forget to enlarge the pictures 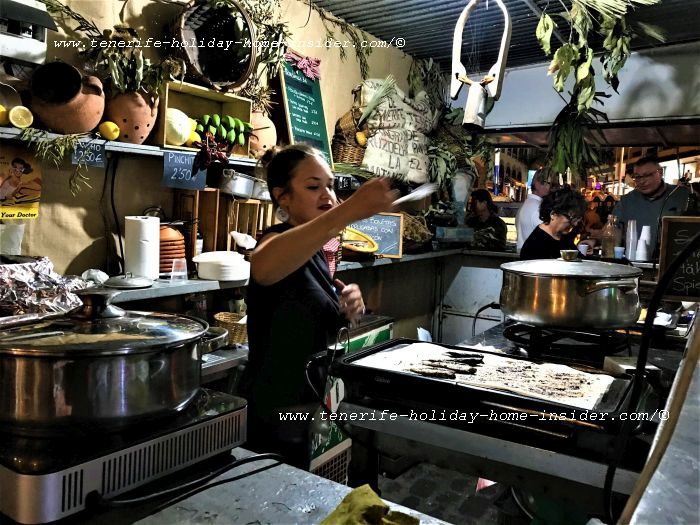 One of the San Andres food stalls where roasted Chestnuts, grilled seafood, barbecued chicken, as well as wine, was sold 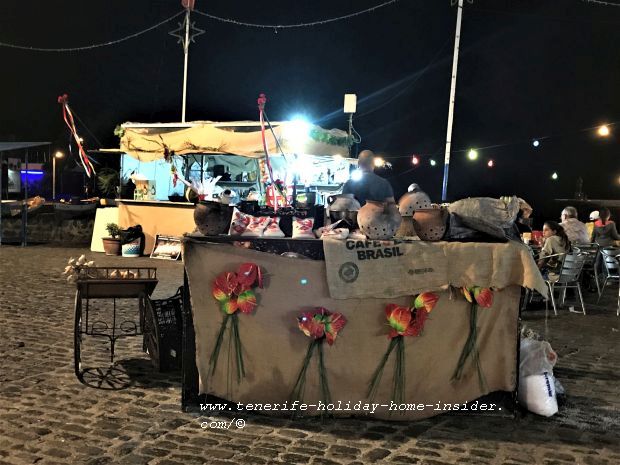 Roasted edible Chestnuts can be bought as take-away at one of the alluring food stalls behind them. A stone throw from them, Atlantic waves wash onto the seashore of a picture book idyllic fishing port. There, the Christmas lighting of La Aduana the most ancient building of town adds its magic. Remember to click on the photos... 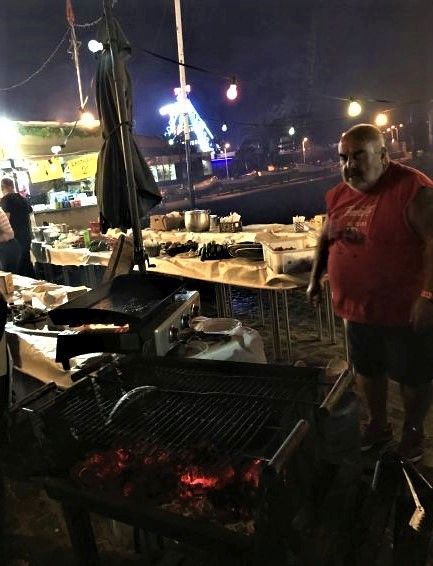 Compare 2018 to 2019 Fiesta de San Andres details below.  Indeed, Puerto de la Cruz isn't only restoring hotels and beautifying streets and has more and more festivals. It also has better fiestas by the year, lately, as I will prove to you with more and more fabulous photos. Mind beautiful photos need beautiful scenes and there are many in enchanting Tenerife North.

You shall see flames coming out of the chestnut brazier on the right when you click that photo to enlarge it. 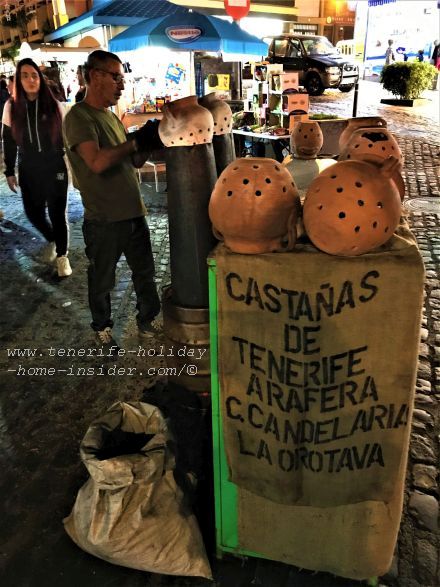 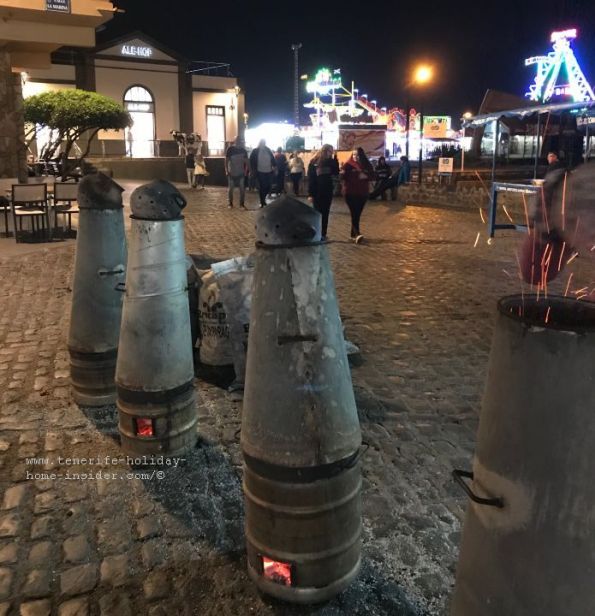 Chicken chunks on skewers roast above charcoal fire on grills. Garlic and onions are more than decorations. Salted fish like Chicharros and Sardines are grilled inside the stalls on gaz barbecues. Papas Arrugadas are never amiss. Wine from recently opened Bodegas of the region is the prime beverage of the day. A makeshift seaside restaurant has been added just for the occasion. Tourists and locals are seated there and merrily watch the world go past. Big dogs are part of it. 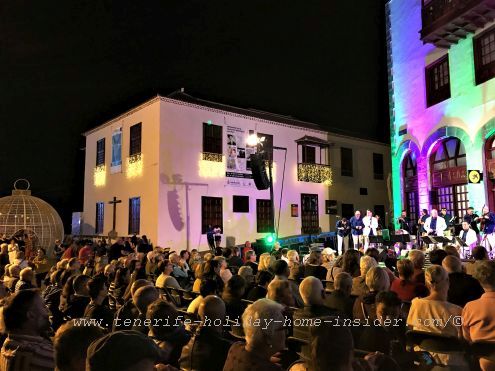 Every year, the sound of instruments that are being tuned by a famous orchestra travels over the esplanade of this oldest Tenerife resort. Seats there are taken fast, as no entry ticket is required. Locals and foreigners also sit on walls of the Muelle, as not to miss the fun. All kinds of music is expertly played, eventually. This is not all that turns the Fiesta de San Andres into an end of November number one event for its amazing variety.

Not to forget that small photos may be clicked to enlarge them... 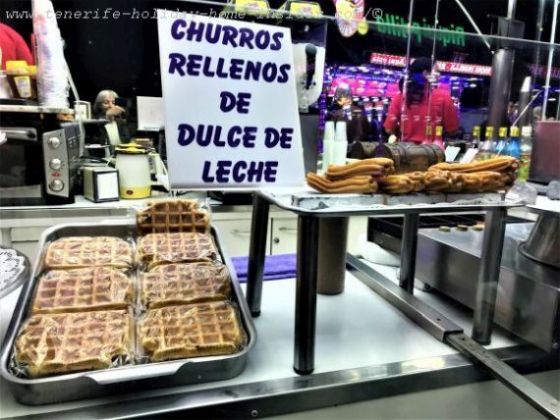 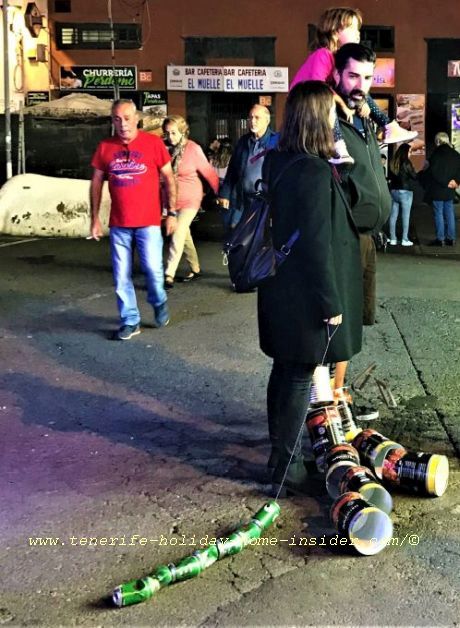 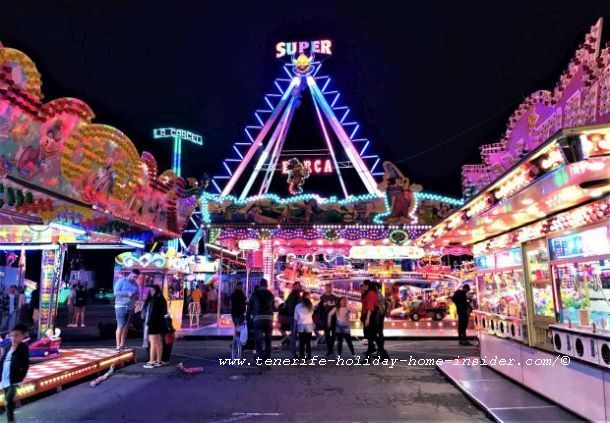 Photos above show more assets of the Puerto Cruz celebrations. For example, there's also the amusement park thats just around the corner. And so are are the Cacharros on Puerto's main town square where kids race them noisily. However, one sees kids with this symbolic toy of San Andres everywhere in town. Also in the neighboring Los Realejos where the event took place in Calle Los Remedios on the same day.

This takes place on November 30 after the inauguration of  Belenes (Nativity scenes) with a Christmas concert by the townhall. It's also a day when New wine with Tapas and Chestnuts are specials in the town hub restaurants. 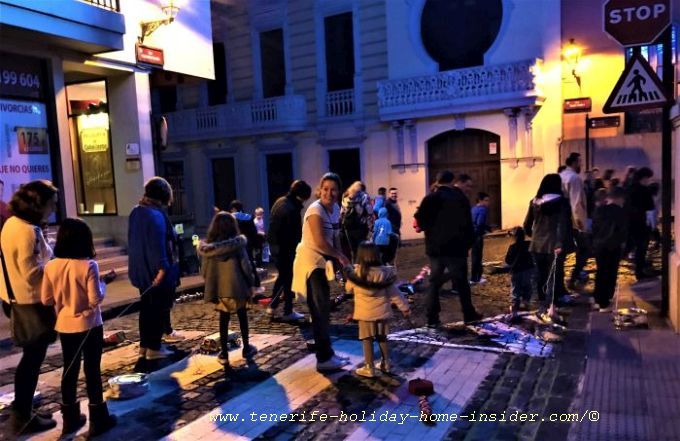 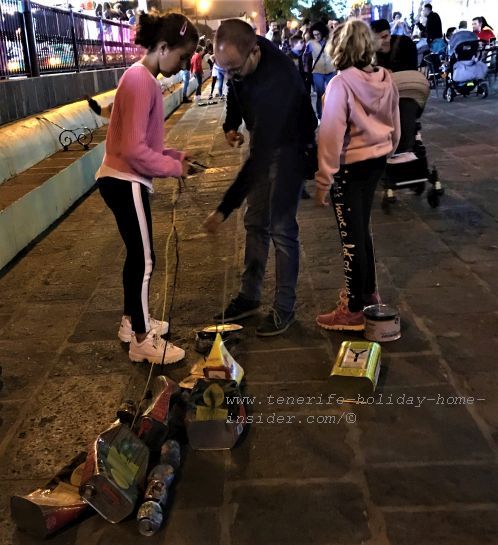 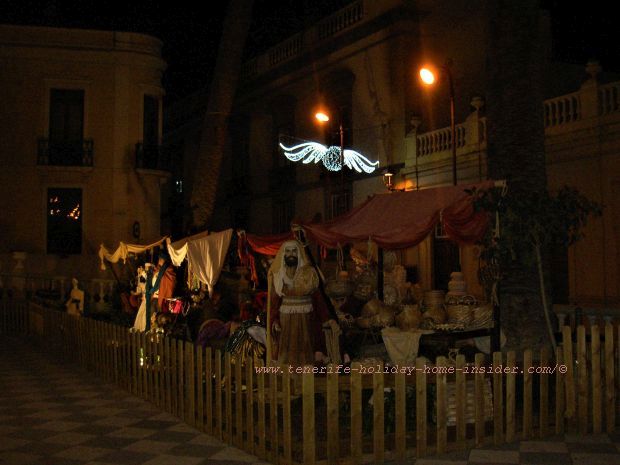 The day's custom of the walk with Cacharros is a huge event where small kids and pupils of the entire region partake. A most memorable attraction for many, indeed.
The sound of what I call a happy metal rattle brigade  reverberates on several Orotava cobblestone streets from 19.00 onward. Everybody is welcome at the noisy walk. Needless to say,  adults acompany the tiniest kids who drag a rattlesnake made of stringed up hollow tins behind them.  Appearantly,  newTh safety regulations won't allow enormous metal things anymore, as happened in the past. You still see, fairly big sized car part housings of stainless steel, empty olive oil- and benzine containers, though.

Origin of the Cacharros of Fiesta de San Andres

All sorts of bizar stories are told in the context that involve fantastic beings that had to be scared away with noise.
Hearsay also mentions strange episodes about a drunken Saint Andrew (San Andres) who passed out and was brought back to life by children with the help of the so called Cacharros.

The history of the Tablas of Icod de Los Vinos

That's less of a puzzle, because of Portuguese settlers as early as XVI. Appearently, barrels of wine were rolled down to the ocean from Bodegas in Icod de Los Vinos and La Orotava. They had to be washed out well with salty seawater before they could be used to make new wine. This custom is lost and has been replaced by a new method. Anyway,the noisy Tablas help to keep this memory of yore alive.

The activity of the rides of Tablas belong to the World's most unique sports activities.

Nowadays, the waxed Tablas are seldom much bigger than scate boards. The latest can be bought with small wheels underneath and can be steered in front with a string. All Icod de los Vinos Tablas carry Adrenalin driven youth down steep roads, with a speed that looks like it could rival Formula One. The not so young sometimes lead on with a Trillo Tabla. That's an ancient agricultural instrument which seats five or six persons in a row.  Most famous for this dare devil tradition is Calle Antonio González called El Plano where piled up car tires diminish or prevent bone damage. By the way, the nearby town La Guancha has copied this custom.

From Fiesta de San Andres back to Events Tenerife