Health care orthopedic surgery did wonders with Elisabeth in Tenerife.

Health care in Tenerife is as good as the doctor who advises and treats you.

Elizabeth is an elderly English lady who has lived in Tenerife North near Puerto de la Cruz as an expat and later as retiree for many years.

Elizabeth incorporates Tenerife health care for me. She is so clued up. She worked as a British head nurse in the UK before she moved to Tenerife with her late husband.

For the last 9 years I have seen her in the street where I live.

She always needed crutches for as long as I remember.

One day I met her and she told me that she had an accident, again.

She seemed to suffer even more while walking and truly unhappy. 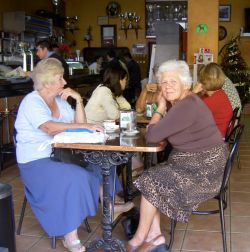 Some months later, I saw her again.
Before, I never really chatted much with her much but now, I couldn't resist.

Why? She all of a sudden had no more crutches. She placed her legs carefully but, without looking onto the ground and, with a very happy expression on her face.

The specialist, who treated her is
called Doctor Cano Camps Xavier. He is an orthopedic surgeon. He speaks English to help UK expats and retirees.

This was confirmed to me at the reception desk at the Bellevue Hospital (Taoro Park) Puerto de la Cruz where Dr.Cano is registered.

What is so important is that Elizabeth is so full of praise about the young Spanish surgeon Dr.Cano.

I had to be highly impressed when I saw her walking so soon after an accident.

He told Elizabeth to come back to him for a slight hip problem which she also has.

Elizabeth has no doubt that he will fix it. However, she told me that she wants a little rest from hospitals for time being.

What has always been amazing is that Elizabeth was always driving her car since her OP.

Elizabeth had 2 more knee operations. Both were done by Doctor Cano. Both operations will even be more successful if she follows the doctor's instructions to swim very often.

In Tenerife North he consults in Puerto de la Cruz as well as in the capital Santa Cruz.

You may phone the following medical centers in south or north Tenerife to make an appointment:

If I am not mistaken from what Elizabeth told me, surgery by Doctor Cano Camps may also be done in Santa Cruz. This happens always when no beds are available in a Hospiten clinic near your home.

Doctors and surgeons in Tenerife sometimes change hospitals where they operate.

Hence, take what you read here with a pinch of salt and check up by finding out in the relevant hospiten (hospitals) whatever you would like to know. Surgeons will always operate in a private clinic such as a Hospiten when no space is available at a university hospital.

Also, waiting times for doctors appointments can in some cases be frustrating, especially for people who only have social security medical aid.

Many people, I know back up their health care insurance privately as well.

This applies to natives from Tenerife and to foreigners.

It's always good to keep medical insurance in your native country, as well.

When you read Clinica Azul in North Tenerife, please, note, that it means doctors rooms shared, sometimes by 2 or more doctors. Clinical operations are not done there.

Once, I went to a Clinica Azul and left before I was attended, because hours of waiting made me hungry and tired. However, reason for this was also that both doctors were very popular.

By the way, social medical security in Tenerife is not for dentistry except teeth cleaning and tooth extraction which is only for free once year. You need a private insurance for more dental surgery and care or you must pay cash. However, I have been told that Tenerife dentists and orthodontists are cheaper than in UK for root treatment or any other dental care.

When you need health care and medical support you must always go to your local Centro de Salúd first provided you are registered with social medical security in a European Union country.

A Tenerife Centro de Salúd also knows how to handle your foreign health security documents which you must always bring from overseas. Los Realejos has 2 Centros de Salúd, one for lower and the other for Upper Realejos which is a town part on a very steep hill.

I recently went with a German friend to a Centro de Salud. All that was required by her was what they call the blue European Tajeta for health services. It looks almost like a credit card. This so called tajeta will entitle you to free health service in Tenerife. You will not be attended as cash paying patient in a Centro de salúd.

Not, even in times of emergency. Go to a Clinica Azul, to a hospital or to any doctor who accepts private patients.

Health care insurance with a difference

DKV were highly recommended to me. No, am not affiliated. They also offer greatly reduced polices that don't cover doctors visits and dental.care. More here.

Most Tenerife hospitals (hospiten) in Tenerife give information on medical care in English, nowadays.

Many of them also have in-house interpreters.

From health care back to retirement advice. .