The cuisine at the Tenerife Indian club and what's up

The Indian club in Tenerife North was not a place that's supposed to attract tourists. However, those that love the real India with all its imperfections besides the intriguing customs and its tempting cuisine were welcome. The club's door was open on July 01, 2014 when we went there. 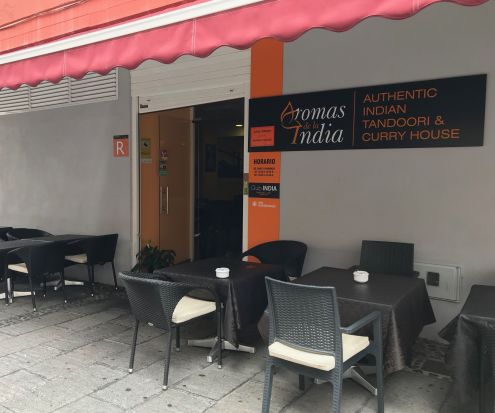 Friends from the Island of La Palma were eating there at the end of August 2018. They were full of praise for both quality of food as well as service. I was delighted to know it's open again.  Now in 2018, the Tandoori King Prawn dish for just under Euro 12.00 seems to be the most expensive together with the Aroma Mix Grill for just under Euro 14.00.

In fact, I knew this Asian association from way back.  However, again in 2013 this place of curries had been recommended to us for best restaurant meals by an Insider,  more than once.

The Puerto Cruz Club of India

We are looking forward to Puerto's daily club menu with generous portions, once the so called 'reformas' are done . Last, we ordered a la carte, as only Biryani was on the agenda.

Most of the dishes on offer were Vegetarian.

The cuisine which we sampled 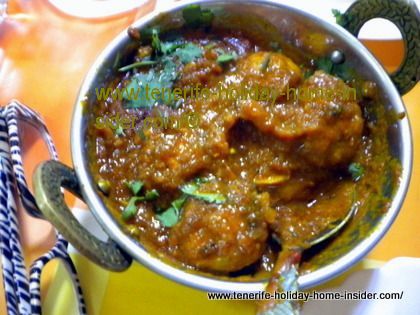 However, we asked Jaswal the chef to serve it to us in a curry sauce. Later, he even gave us a second helping, as we liked it so much. We ordered extra rice, although our first portion was rather generous. 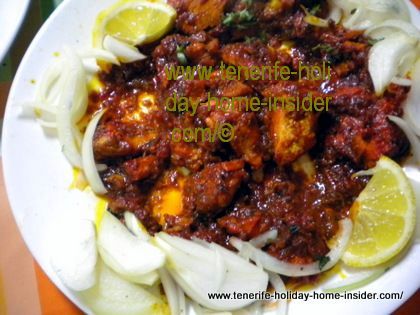 Then we tried the Chicken Tikka Masala, It had a rather distinct flavor compared to other such chicken dishes. You may say that it had an acquired taste. 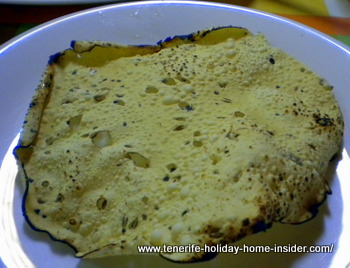 The food at the Puerto Cruz Indian Club was expected to stay wholesome. Without modern additives and preservatives... Was it very spicy?
We ate much hotter meals in India but, the amount of Chilly in our lunch at the club was perfect for us. You can now chose how hot you want your food which is marked with chilies from 1 to 3

What we paid for it all

Our lunch in summer 2014 set us back Euro 32 for both of us with drinks, none of which were wine. We nibbled more than one utterly delicious Papadam. (Actually about 7)

Other amenities at the Indian club of Puerto Cruz

There was a prayer room for Sai Baba fans who could assemble there on Sunday afternoons. The hall which could be seen from the dining and bar area could be used for staging Indian dance, ceremonies and Puja rituals. Such Hindu events took place but were not made public.

Diwali was celebrated in this Tenerife North club on the day of the full moon of the month of August and, not in October.

A few years ago, we booked catering for a non Indian birthday party with 30 people. There was a different cook at that time who is now in London UK.

A young Spanish couple as well as two Indian business people who conversed in English had lunch there, besides us. Obviously, the place where we ate also suited Indian commerce and trade meetings.

You could expect more guests in the evening, many of which also just came to have a drink at the long bar counter.

By the way, this social as well as business club was ideal for eating Indian food in town when the 'Mata Di restaurant' which is also no frill is closed for holidays around May and June.

The town of oldest Indian Hindu community on Tenerife Island

From Indian club back to Tenerife restaurants

What is the Indian festival of lights?