Lidl Tenerife and why it's different 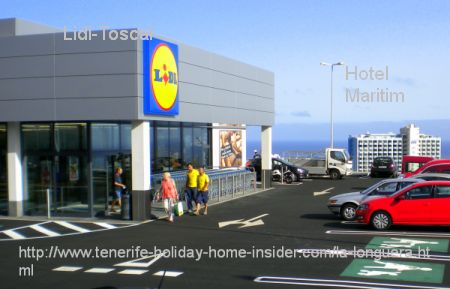 Lidl Tenerife with El Burgado of Toscal Longuera by Puerto de la Cruz as an example of its stores which all follow more or less the same shop outlay and business style.

Lidl Tenerife which started its first store in Puerto de la Cruz on February 04, 2010 has a long history that goes back all the way to Germany. There, its first outlet in its modern form was created in Essen in 1971 when the highly successful 26 year old concept of the Aldi brothers was copied.

The 27000m2 big collection and distribution store at Guimar near the capital is not only used for delivering within the island. This brain of logistics where Lidl products are sorted and may even be cooled in different ways is an assembly point. Part of its wares are not only dispatched to the rest of the Canary Islands but may even go to foreign outlets all over Europe. However, not much food and drink from Tenerife is competitive enough for that. Yet, exclusivity follows its own rules, such as local cheese from all Canary Islands, honey and wines with a novelty made from bananas, for example.

What are Lidl Tenerife's commodities?

Food, fresh, canned and frozen which includes produce and dairy products bought locally or sourced within the Euopean community. Everything has proper departments at the Guimar stores. Not to forget are the numerous house brands of Lidl. Then there are simple foods, such dried carbohydrates like beans, peas, lentils, rice, oats and even Gofio, basically what is sold in other Tenerife supermarkets as well. Not amiss are cleaning and grooming products, pet foods, alcoholic and non alcoholic beverages. Bread and pastries are baked fresh in every Tenerife Lidl chain store.

How Lidl Tenerife has grown

The shops that followed Puerto Cruz

Upper Realejos Poligano Center, better known by
the general ITV testing grounds where you can't miss seeing Lidl
after passing it at La Corona, La Gañania, Manzana 4
Tel for the public: Not available
38410 Realejos (Los)
Open: 9.15 - 21.15 Mon - Sat. to be confirmed
Note: This shop on a steep hill is only convenient for locals that live nearby,unless you come from the mountains.

What does that mean? Obviously, competition is a blessing for the end user.

There was another minor incident in this context. Mercadona Tenerife had augmented the butter price. Lidl opened its first store in Puerto Cruz with much cheaper butter. Quickly, Mercadona lowered its price again to be on par, both at the Martianez as well as at la Vera.

Please note a mistake of address for El Burgado Puerto Cruz. This is very incorrect, as Lidl is around its corner by the traffic circle in Calle Teide. Calle Teide belongs to Los Realejos.

Not only its business hours are most convenient. Why?  This large supermarket is only closed on three days of the year. That's December 25th, January 01 and January 06.  Mind that the supermarkets Supercor on Plaza Charco of Puerto de la Cruz as well as Supermercado Econorte in La Longuera, 21 are open on these prime Tenerife holidays. Otherwise, get your groceries at the Burgado Lidl outlet late on a Sunday afternoon early at night and discover its extreme popularity. Then even late, Lidl Toscal Longuera is still humming with very huge crowds.

Although all Lidls are pretty well stocked, I prefer Mercadona in the long run, Mercadona supplies me with a big offer of fresh fish and a few house brands that don't seem to have alternatives at Lidl yet.

Of course on the other hand, Lidl also has brands that you don't find at Mercadona or at other Tenerife shops or Mega-Stores. I love its instant coffee the brand Bellarom Clasico.

The Titsa buses 352 and 381 and perhaps soon again the 354 are stopping about 30 meters from this Supermarket of Lidl of los Realejos Toscal.

Would you like to know more about Puerto de la Cruz shopping?

From Lidl Tenerife back to shopping in Tenerife