Is Playa de la Fajana worth the hassle of getting there?

Playa de la Fajana is one of most virgin and most isolated Surf beaches of Tenerife.  To try to get there is certainly worth the hassle. We spotted the surf beach of la Fajana for the first time from inside the old Gordejuela ruin.

Some youngsters in their late teens or, middle twenties climbed down to this insider surfer beach from the awesome cliff above.

My friend and I were flabbergast when we followed their careful movements on the most awkward rocks of an almost 180 degree cliff. They were agile like mountain goats. They carried surf boards.

At times, they were lifting their colorful boards over and around green bushes. The most amazing flora grows in those so called protected spaces de Castro by the Westcoast sea. Oh, and there was a tent down there, too. Perhaps, it belonged to somebody who tried to avoid to master the difficult ascent.
We heard that there is a pick-nick spot and a barbecue area. That's much likely. However, no amenities whatsoever... You bring your water and food.

This must be a great surfer beach, though, otherwise the guys wouldn't take the trouble to get to it.
We were only lucky to discover this beach called Playa La Fajana, as we could see it from the old ruin.
It's said that there is another long but difficult access from Castro beach via a tunnel. 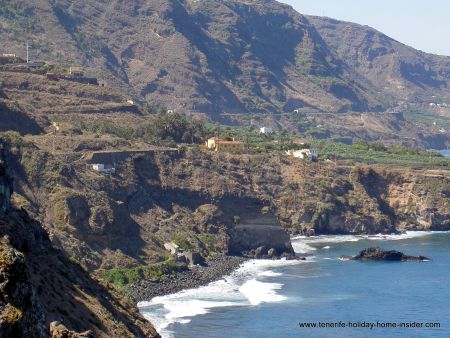 Realejos coast the wild one

The Fajana surf beach looks tiny from high up in the ruin. It also also appears to be rough and dangerous in winter. Not withstanding, it's a rather big beach,  so they say.

It's bigger than Playa de Castro and Playa del Camelo, both of which are on the same Realejos coast. Only Playa del Socorro may match it. But that's hidden. It's behind the cap after el Guindaste, as it's in the next bay.

By the way, this coastal photo was taken in winter. Playa del la Fajana shows no fine sand at this time of the year. Sand is the luxury of summer with most virgin beaches in the north. 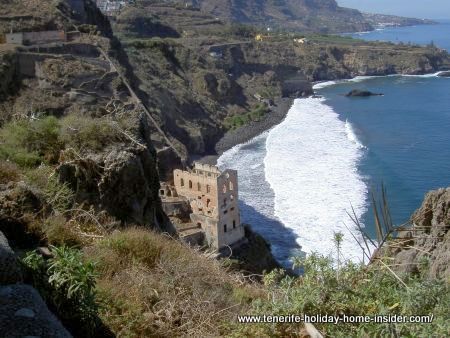 Above is a picture with the ruin of La Gordejuela which lends an extra air off romance to the intriguing Fajana beach.

How get to the ruin of La Gordejuela?

Marvel at the indigenous plants that grow on the cliffs above the Fajana beach. A pity that a highly interesting article by Dacil about the steam pump mechanism of the Gordejuela of 1903 is in Spanish. It points out the immense richness of water in this location. This fact seems to confirm the legend of the Garachico refuges. They took shelter at the Gordejuela during the 40 day eruption of the Trevejo in 1703. I mentioned this before in the context of important Guanche history Tenerife of this region. Dácil also accentuates the sensation created by the firm Hamilton who built this first one of a kind steam engine in Tenerife. It could carry 4800cbm of water a day to fields 4km above on the slopes.

From Playa de la Fajana back to Tenerife beaches Realejos.