Actually, I stumbled upon the Bee Hive Pub 1 sports bar off Calle Iriarte when I came from the British bookshop Stratford. 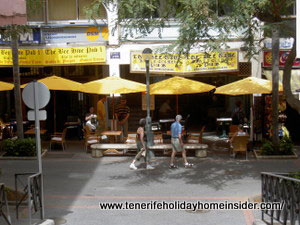 Bee hive Pub1 Tenerife
Steep roads and suburbs on hills belong to the charm of Puerto de la Cruz. I was surprised to suddenly spot an intriguing Pub and bar at the end of a climbing alley way called Calle Casino off Calle Iriarte. I could read Bee Hive Pub and discovered later that it was in Calle Hoya.

This pedestrian road was bathed in a mellow light where big yellow umbrellas cast some shade together with small leafy trees. All added to the street's picturesque charm. This is the Puerto Cruz Tenerife which I loved so much when my late husband and I hunted for a holiday home in Tenerife around Easter 1997.

Otherwise, many ravishing little boutiques, galleries and agencies add colorful interest to Street C/ la Hoya around the pub of number 25 with Tel. +34 922 383 9149. A few stone benches invite you for rests while you may take in all that provincial splendor of a town where almost everybody seems to have time, while business is done at leisure. 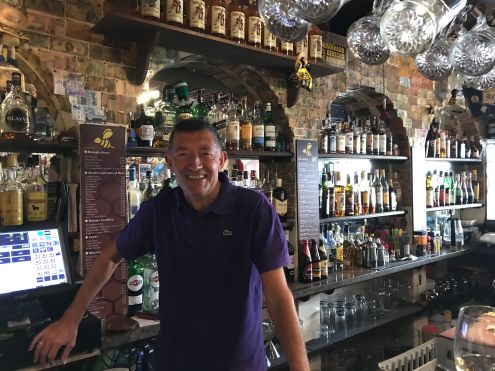 Greg of the Bee hive pub 1 in Calle La Hoya

Portrayed above is Greg who I believe dates back to founders days of the Bee Hive Pub 1 of 1981. 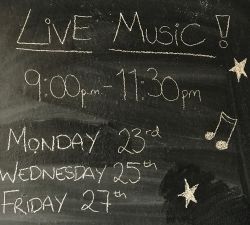 He told us that December 2018 will be the 37th birthday of this English Tenerife pub.

However some partying is taking place three times a week with live music at night already, as displayed beside on the blackboard. 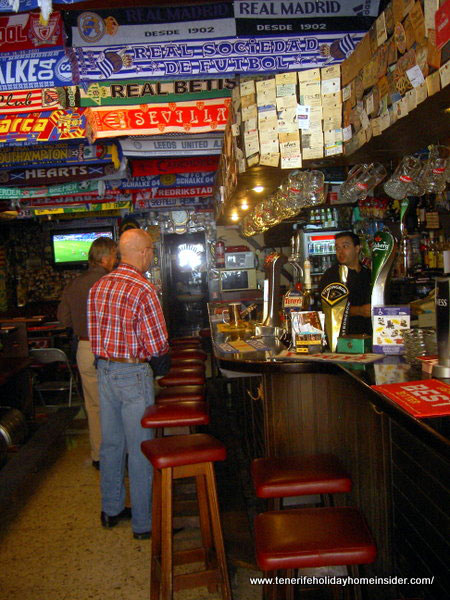 This cozy English Bar which refers to the humming of bees is not quiet, but not noisy, either. It's one of many Tenerife bars of all sorts a vibrating hangout for socializing British expats who don't only love watching soccer there.

Needless to say, all important private British sports channels are at this pub thanks to Satellite. Call this sports bar with all its sports memorabilia an expat club. That description isn't far fetched.

The Bee hive Pub has two entrances. One is for a games room. The other one has a billboard on top where also read 'British Atmosphere'...

British soccer team banners in Puerto Cruz pub
British vibes are everywhere, indeed. Make out countless banners of British soccer teams,, such as Manchester United. Click the photo banner to enlarge it... Spot Cardiff Devils, Runcorn F.C., Alton and more. Go to this sports pub and check its whole displayed collection under the ceiling by the long bar. Of course, names of famous football clubs like real Madrid and FC Barcelona are not amiss.

This Pub rather strikes me like an English club for soccer fans. 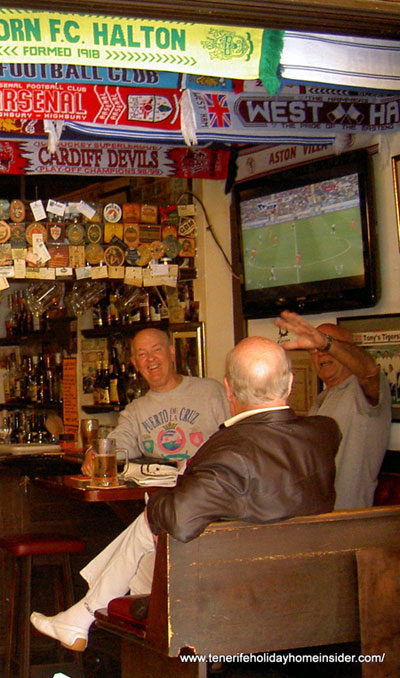 Don't only find Puerto Cruz British expats there but regular winter visitors who rent or own a holiday home in Tenerife.

The owner of the Bee Hive Pub 1 is a local who is married to an English woman. He employs Portuguese waiters.

Best English beers and snacks like genuine pies and UK breakfasts are on offer, while prices are very reasonable.

La colmena specials by a Puerto sports pub
Look at the poster of La Colmena specials for a Pint of beer for €2 for example. The latter is subject to change, of course. La Colmena is the Spanish name of this sports bar.
By the way, any other English sport is celebrated at the Beehive, as its TV sports channel is on non stop.

Indeed there is a 2nd sports bar by the same name. 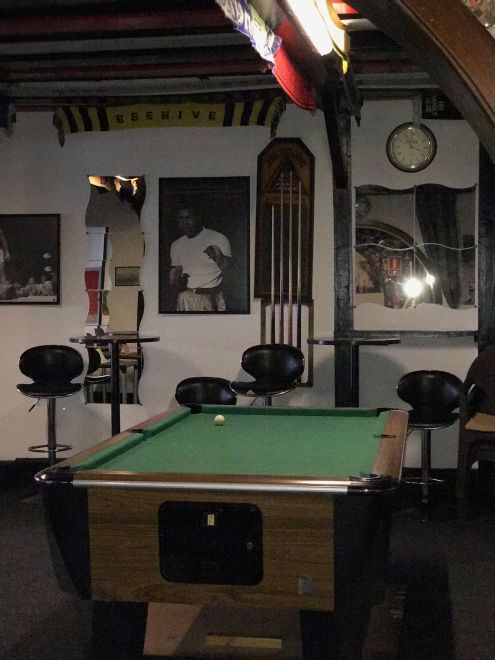 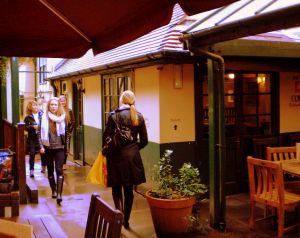 The Oxford Tavern UK by the backdoor of this celebrity pub with the Tenerife holiday home insider's daughter in the picture captured walking behind her in 2014.
A most intriguing ancient student pub in Oxford where the Tenerife holiday home insider once sat on the same short and narrow corner bench where President Bill Clinton is said to have held "a joint" followed by even stranger rumours. Why? "That he never inhaled".

From Bee Hive Pub 1 back to bars in Tenerife.