Meet the British emigrants to Tenerife downstairs in the Bellair building at the bar Robin Hood. Often, my UK friend Alan went there to enjoy soccer games in company of a British crowd. 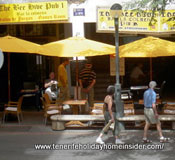 Find them also at the British pub the Tenerife Bee Hive sports bar which isn't only loved by British expats but also by tourists with a holiday home in Tenerife.

Or even at the Paris Cafe opposite the Lido Lago Martianez.

Lunches and dance venues for expats 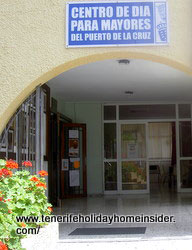 Centro de Mayores Tenerife
At lunchtime, stumble onto some of the British retirees who live abroad in and around Puerto Cruz. See them at the elderly daycare center called Centro de Dia de Ancianos Puerto de la Cruz. Spot it to the right of the former Titsa bus station of Puerto Cruz.

None of the elderly expats from Britain who came to Tenerife North would want to live in the South of the island. You encounter many in Taoro Park, at the British library as well as at the Anglican church or its church
bazars. Some even turn up at school events of their grand children at the British Yeoward school by Carretera las Arenas the Taoro of Puerto Cruz.

By the way, the location of the Tenerife giant cliffs is also much liked by UK travelers. The harbor and sports club of its Marina is almost part of British immigrant history and Los Gigantes Tenerife living.

Alvaro's is still one of British expats favorite hangouts. It's sports and tennis club in La Paz is a fairly big place just after Trebol near the Cupola where you see Mount Teide on the horizon. Even enjoy a game of good old English bowls at Alvaro's Club de Ocio y de Deporte Puerto de la Cruz.

One of oldest UK expats in Tenerife

Angus Low of Scotland is not British but has forever mingled with British expats. He has lived on retirement in La Longuer Los Realejos by Puerto de la Cruz since 1987. The former bowls champion turned 90 on January 2nd, 2012. Angus is still looking top fit despite a few ailments which can't be avoided for his age. But he still has all his teeth and much hair which is incredible. 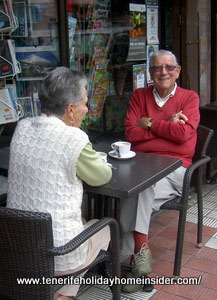 Admire the extremely youthful 90 year old Angus Low of British expats in the picture on your right. It was taken in April 2012 in the Libraria Café of la La Longuera. Here, he is in company of an elderly English lady friend who also retired in the same suburb. By the way, meet many English speaking retirees in this part of Tenerife. They all love to go shopping at Carmen's in Toscal Longuera. Not all of the retirees own property there which includes the suburbs Los Potreros and La Romantica I and II. Some rent a holiday home in Tenerife during almost half a year to escape cold winters of Northern Europe. Some come from as far as Russia, Canada and the chillier parts of USA.

By the way I must confess that I haven't seen Angus and Steffne any more, now in 2018.

I met Steffne the lady friend of Angus. I asked her why I hadn't seen him in the Longuera. She said that he broke his hip when he fell. No idea why, she added. "Now he is at the Davida elderly care home in La Paz. He is very well, as he is very very well looked after", she told me. "The Davida is almost a 5 star hotel and Angus looks 10 years younger", were Steffne's most impressive words.

"Is it cheaper than a place in Scotland of the same standard", I asked her. No, it would be on par but it's so much nicer for en elderly person to be in sunny Tenerife", she added. Steffne moved to La Paz the Puerto Cruz suburb also, as her home in La Romantica 1 was a little damp. Now she even has nicer landlords. They spoil her and it's easy for her to see Angus every day. Oh, and the most amazing is that he learned to walk again after his hip OP, And that at the age of 93 or 94...

Elderly retired Mr.Mills from the UK in Tenerife 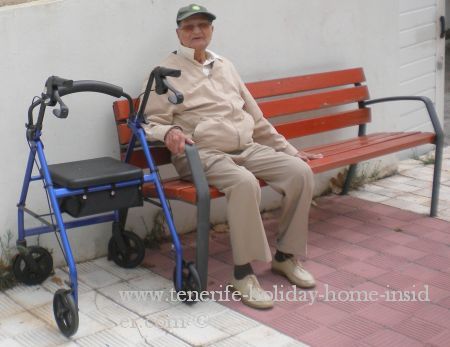 I see the happy 92 year old quite often. He is making an effort to walk outdoors as much as possible. He is depicted having a rest near his home in Calle Jazmin of Toscal Longuera. There, I meet him once in a while when I walk our dog. Note the push trolly next to the gentleman. He told me that this gadget is a real blessing. "So much better than crutches", he said. Mr Mills never looked back after he took his UK GP's retirement advice to relocate to Tenerife. The doctor had told him that the climate would be the best solution for his fragile health. Indeed, this helped Mr. Mills to reach a very proud old age. His condition isn't perfect now but no complaints. However, his pains by bones and joints would have been unbearable during the cold Northern winters in Great Britain. "That's for sure", he added. Besides, he is also quite content with the medical care he gets in Realejos as well as in the capital.

From British expats back to retirement advice by Claude where find more links to Tenerife settlers from the UK and elsewhere. There also discover information for the Tenerife Spain health care system which is one of positive criteria for retiring to Tenerife. 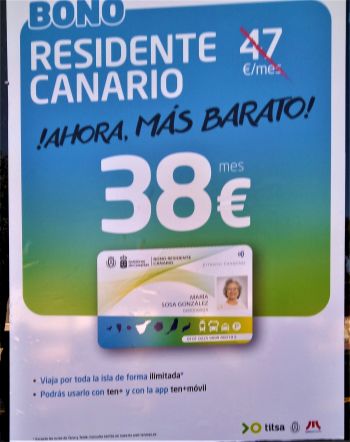 Depicted is the Bono Resident Canario as called lately by Titsa Tenerife transport. Even the new reduced price isn't cast in stone if you asked the Tenerife Holiday Home Insider. It's likely to be discounted even more. There's an even cheaper public transport card for pensioner expats who reside on Tenerife or any other Canary Island.

The culture of sports brought by British expats

The Gobierno de Canarias Canary island Government cites the importance of UK expats in founding an immense amount of sports clubs in the Canary Islands. They are listed with other facts in the Index and are very easy to understand.