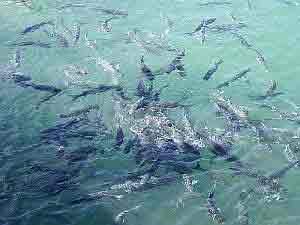 It's great fun to watch the brown fish in the marina come to the surface of the turquoise water. The privilege, however is not for everybody. You must know the harbor master, have a boat in the port or, be a member of Los Gigantes harbor club. Why? Safety is rule number one here.
There is a barrier when you want to come in. It's just by the little shop where you can buy bread for you or for the fish. By the way, it's considered good manners to bring  the fish in the Marina bay old crumbs. 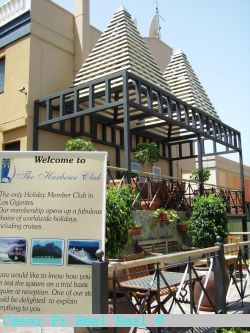 That and the harbor club Tenerife in Los Gigantes go very much together for the British.

One meets there or in one of several pubs of the Marina for socializing over a beer which might be the dirt cheap local Dorada which still shouldn't set you back more than €1,50 now. Mind that the Harbour club Los Gigantes is also a Timeshare hotel.

People at the club are all very fond of Tenerife water sports.They go diving, fishing, sailing, wind surfing and deep sea fishing. They might bring around a local beauty for the next boat trip to Masca. Some might play a game of darts, make arrangements for a tennis or a golf get together. Some might even argue over the latest Labor Party gossip of London town. Something is always going on at the harbor club.

Those who sport liquor more than activities of the water will be seen in the pubs of this Marina in Tenerife which have a heavy Spanish touch. That's all part of Tenerife living in Los Gigantes. Those pubs were quite full during the short time I was last on shore there. A few boats in the Marina were coming or going. Tour crafts seemed to be all out on sea. 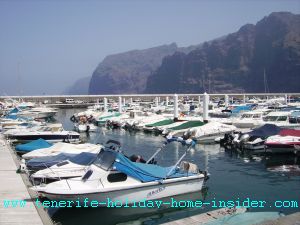 Of course, the rather humble scene in Los Gigantes' yacht harbor can't be compared with Monaco's. The mood at Tenerife's West Coast is more down to earth. Life is friendly within the relatively small community. People give you tips where to find spares for your boat or, where to have it fixed if you don't want to do it yourself. Of course, the town is geared up for it.

Keeping your yacht in the Marina

It may stay there overnight or longer for a fee.

I have a friend who is very fond of Tenerife living in biggest town by the Teno. He has his boat moored in the Marina of Los Gigantes without living there. Yes, I believe it is possible to have houseboats in Tenerife. I know somebody who has his home on the water in the Garachico harbor.

The skipper in Los Gigantes doesn't use his boat much. Therefore, he's a bit unhappy of having to pay like EU 700/year (which may be more now) to keep it moored. Mind that keeping it in a yacht harbor requires permission from the harbor master.

Second hand yachts may be bought or, you might be able to sell yours.

There are about 20 small vessels and yachts advertised for charter in the Tenerife capital Santa Cruz at Topbarcos.com.

None seem to be available in Los Gigantes, though.

Go to Boat trip Los Gigantes to learn about my own totally private, unforgettable Tenerife boat tour where also see a video of a none plus ultra family boat hire to feel like a millionaire ocean cruiser.

Prefer Tenerife sailing and want to learn it?

Learn to sail on the 37 Jeanneau Sun Odyssey with its sailing school of Los Gigantes. Call the sailingclub www.losgigantesmarina.com.

You might also wonder about the new yacht harbor of Garachico

From Tenerife living marina los Gigantes back to Los Gigantes.

For more information about living in Tenerife by expats and retires click here.

Wow what a harbor