A Carnival queen is the most important personality in a Latin Carnival which includes South America, besides mainland Spain, the Balearic as well as the Canary Islands. In Brazil, the Carnival King has more prestige, though. 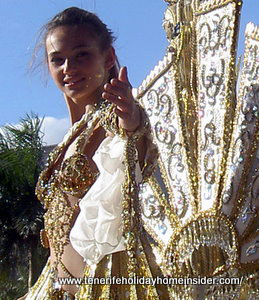 Carnival queen of 2012 a Tenerife example

On February 12 of 2012, the nineteen year old Carmen Gil Gonzaléz of La Laguna was elected as the Reina Adulta the main queen of disguise for Santa Cruz the Tenerife capital.

She was different with hardly any makeup when I saw her during the Gran Cozo Apoteosis on February 21.

Click the photo to see an enlarged and more detailed version where you may wonder what the hand wants to say.