Playa Blanca takes your breath away

Playa Blanca Caleta Diego Hernandez is more than wild and wonderful. It's one of a kind. 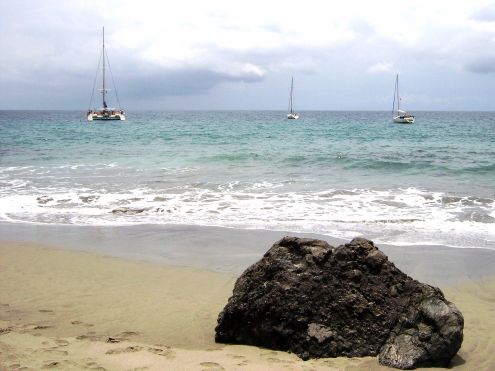 Its almost hidden whereabouts by Costa Adeje are only known by insiders or some locals. This seashore oasis that seems to be guarded by vicious rocks has almost snow white, very soft sand and water that's more gentle than in the Caribbean. However, there are the odd killer waves, Jelly and Angel fish that are not pleasant.

This white beach by Armenime is an almost virgin seashore of about 80m length. The width may be 20m during tide but otherwise shrink much. There are no amenities and it helps to bring a first aid kit. No flags tell you if its safe to swim.

However there, the ocean is very clean which includes the occasional horse shoo type pools between crevices.

Where is this little known beach of Tenerife?

Let the map Tenerife White beach help you to get there.

It shouldn't take more than 40 minutes from there by using the TF47 road until Adeje. Then turn off to La Caleta. 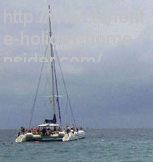 Spot a Catamaran which is depicted beside.
In fact, it is approaching the shore. For sure, it's going to anchor there.

Private yachts or companies, such as www.tenerifedolphin.com offer such trips. They depart from nearby Puerto Colón or Los Cristianos for watching dolphins and whales. Then, tourists may bath at Beach Playa Blanca out of sight from prying eyes, as swimming with the giant Cetaceans isn't allowed.

How reach the Tenerife Playa Blanca from Adeje on foot? 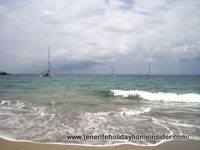 This beach which my friend César calls Playa Caleta blanca is located by Punta de las Gaviotas (cape of Seagulls) between El Puertito of Adeje and La Caleta.

It is definitely off the beaten track. However, it's worth every effort to overcome the rocks that are in its way.

The see-through pristine water is of the highest quality and the sea life under its water is very worthwhile to explore. 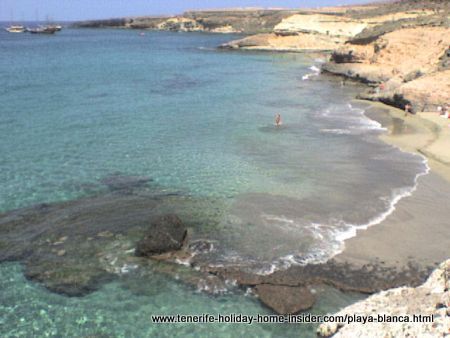 Caleta Blanca Tenerife South a pristine beach
There are two routes to access this immaculate Atlantic jewel. One is along the sea shore. The other one leads off from a block of flats nearby.

Does it sound like a short time? Wait and see...

A difficult hike which pays off at its end 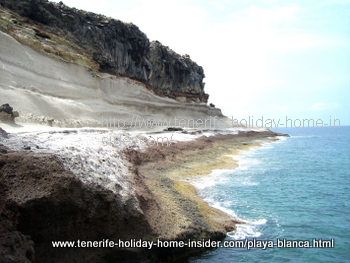 All those that are not faint hearted may risk this seaside adventure to get to this recluse. They must defeat a  route that's dotted with heaped up hurdles. It's more than a treacherous coastal climbing challenge, indeed. Last not least, they virtually have to cross a deep gap between two rocks. 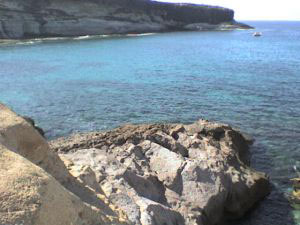 Rough and smooth rocks which make it hard to get a grip.

There, jumping from a low rock onto a higher one can't be prevented. A bridge might help. A stop over to snorkel in the clear waters below would be a pleasure if the rocky outcrops were not that high.

An unusual white sandstone rock is at the end of the small bay. Surely, quite a bit of its pale powdery substance is washed out into the sea by foaming ocean waves. Later on,  it's all returned in an almost eternal cycle. Also notice some different shades of white that change into a pale yellow... 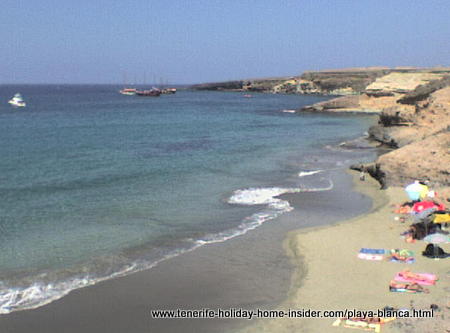 By the way, the rare geological conditions of this white beach by Armenime are unlike those of the geology of el Medano beaches.

You have to admire this small wonder of rare Canary Island volcanology that's a true Macaronesian jam. 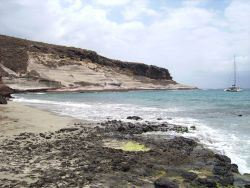 The small mountain or cliff by Beach Blanca runs all along the shore. It backs the 200 meter long seaside with its width of 20 meters. No nearby people from hotels or from houses may look in.

By the way, the green spot that looks like pollution is only a shallow rock pool.

Compare with other Tenerife naturist beaches

Beach Blanca Diego Hernandez makes it possible to swim without currents contrary to the nudist beach Playa Los Pintos of La Orotava. Excessive wind is rarely encountered by the Diego Hernandez Southern waters. However, the naturist beaches by  the legendary red mountain of El Medano as well as Playa Las Gaviotas the seagull beach by Santa Cruz are far more exposed.

Find recommended Adeje accommodation near Diego Hernandez beach with info on a superb Tenerife region by Playa de las Americas. Have some days of vacation away from the usual tourist buzz. Use it to meditate, to read a book, or to day dream. There, enjoy the turquoise waves of a sea any time of the year. Of course, this oasis of a seaside is worth short or longer stop-overs for anybody with a holiday home in Tenerife.

When a wave washed tourists out to the ocean by Playa Paraiso not far from Playa Blanca and a family holiday in 2014 had a tragic ending.

From Playa Blanca back to Tenerife beaches.