Who should select Restaurant La Papaya for fine dining in Tenerife?

Restaurant La Papaya was first of all very convenient for all, who hardly know Puerto de la Cruz of Tenerife Island.

It was in the quaint street Calle el Lomo.

Indeed, this restaurant has been closed in 2019

Why? Because the owner retired and nobody in the family wanted to take over. Now, it is for sale.

Calle el Lomo is very easy to find by 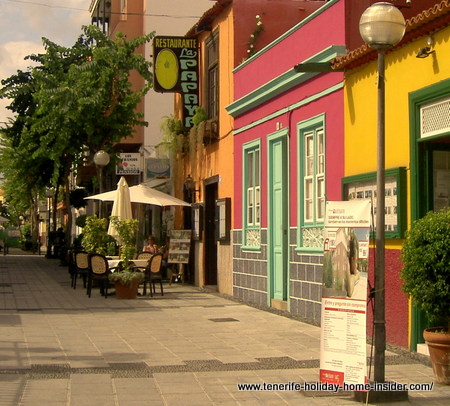 See a section of the quiet Calle Lomo beside with Restaurant La Papaya shown with white umbrellas by its front door.

That eating place with the name of the pawpaw fruit was in a picturesque pedestrian zone with many low, colorful houses. Less than a five minutes walk separates them from the center of town and its little harbor.

Did you know that La Papaya's food and service had  stood the test of time over a period of almost 30 years,
since 1978?

Praise of La Papaya food since 2010 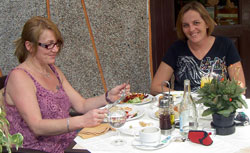 They were seated outside by the restaurant porch, which is ideal for social encounters. It was easy to approach them; they looked so happy and friendly. The lady in pink said that she was coming to La Papaya quite often, as she liked it a lot. Her companion was a first time guest, who nodded in agreement.

That Papaya restaurant praise by strangers popped up in my mind, about 3 weeks later during the carnival week. So my friend Petra Molkenbuhr and I had our first meal there. By the way, there was no carnival decoration at the Papaya restaurant, contrary to  the Casona.

Putting a Restaurant la Papaya dish to the test

We too, went for seats under an umbrella outside the restaurant. This was most practical, as we were expecting another friend, who was not much familiar with the location.

A small glass of fruity white wine was served to us on the house as a welcoming starter. 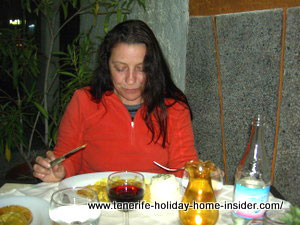 See my friend Petra Molkenbuhr, while she is tasting chicken Curry with Basati rice and pine apple. The rice was done to perfection. The chicken peaces were tasty and virtually melted in the mouth. More of the delicious, creamy sauce which was fairly mild was dished up for me, when I asked the waiter. Petra also liked her red wine, which was a Rioja.
I had to love my water, as I was on antibiotics.

Entertainment at La Papaya for eating out?

No live music entertainment was offered at Restaurante La Papaya at that time. The location is popular for sightseeing and for the exploring of food adventures.

Many also pass through by the restaurant. They want to avoid the traffic of Calle San Felipe. This is how strangers often stumble upon Restaurant La Papaya. They stop and study its food prices. They are conveniently displayed outside in several languages. Enlarge a Restaurante La Papaya menu card depicted on your right. Let it give you a general idea about the dishes on offer. Encounter their prices, as they were at the end of February 2010.

In fact, one could watch the Papaya customers' coming and going by the restaurant entrance from its bar next to an inside dining room.

Many photos of event celebrations of previous guests who liked eating at the Papaya were displayed in the restaurant's entrance.

All that proof was pinned up above a prominent door.

Yes, the Papaya had a history of customer success. 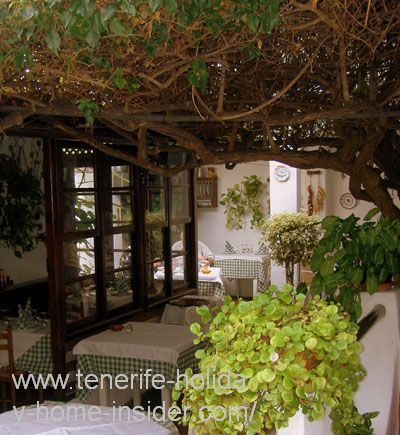 Enchanting patio of the Pawpaw restaurant in Puerto Cruz

Not to forget was the section of the enchanting patio of the Pawpaw restaurant.

It was in a little oasis of a back yard.

There, several nooks had a distinct Mediterranean flair.

Only the round Chianti bottles which so often trail from wooden beams in Italian restaurants were amiss. 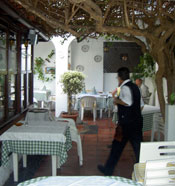 You could sit near flowering Hibiscus and Strelitzias on its garden terrace, while shade giving vines grew above your head in summer. More lush greenery was by the end of this terrace. Small tables were decorated in country style with festive white linen on top. All was part of a perfect frame to enhance any romantic lunch or dinner.

It was a group visit on a Monday while most of us had Vegetarian Tapas which we all shared. However, I also remember the delicious fish I had. It's depicted below. 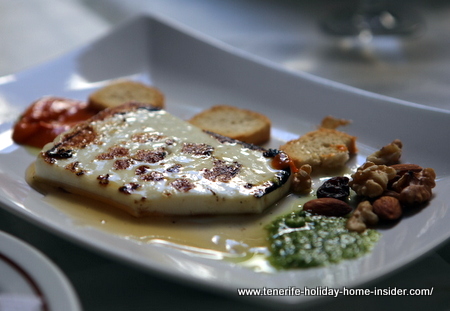 Fresh fish at the Papaya for eating out. 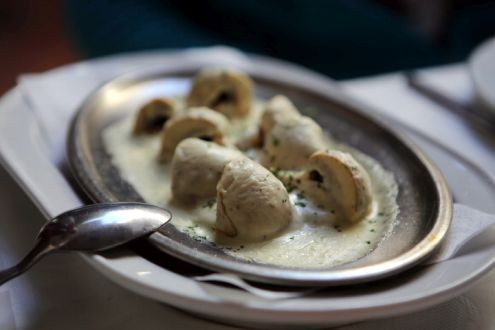 There was nothing grand and impressive about Restaurant La Papaya. It rather reminded a very enchanting country inn, where delicious food and drink made a success of any Tenerife holiday.

Of course, there, are other restaurants for different tastes and budgets in the area. All are appreciated by holiday home in Tenerife owners and other tourists of South and North Tenerife.