Admire Tenerife carnaval with carnival pictures you might not have seen before...

Therefore, you will find even more stunning photos of the crazy, famous Tenerife event when you add the Spanish term for the mad season to Tenerife in your browser.

Look at some unusual, but interesting carnival photos, which are quite a change from the splendid Reina Carnaval Tenerife pictures of the Carnival Queen. 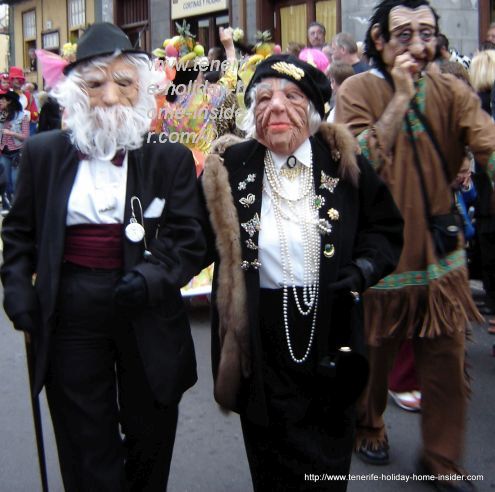 The picture above shows some real Tenerife characters. The elderly men are dressed for carnival funeral but, may just as well take part in any carnival procession. They are made up, as was the custom for dignities,
a couple of centuries ago.

One man complements his suit with
a black melon hat.
Much white long hair covers the side of his face which goes over into a long white beard. A wide, red cloth covers his waste line, as is often custom with Spanish waiters.

His companion has kind of a black
Bask cap on his head, which leans sideways.

Beautiful wrinkles ad to the dignified and lovable expressions of the men. The tuxedo of one of them is covered with medals.

The Tenerife fashion of the mad season reflects any era which makes it much more interesting, as you can see.

The youngest of the Tenerife Carnaval 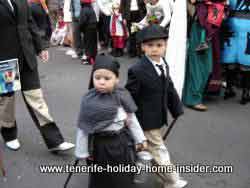 Even small carnival children are
dressed up in almost entire black, formal clothes for the make believe funeral.

They learn to mourn the symbol of the passing away of Carnival liberty.

This is represented by the burial of
a big decorated paper sardine. 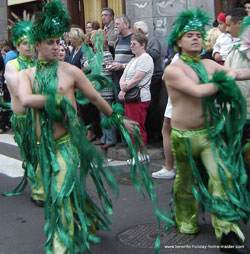 Look at the carnival dancers who take part in a parade. They are dressed in silky clothes. They would fit into Emperor Cesar's period.

Both of them look like they have much energy.
Their torsos are almost bare.
Their legs are covered with green trousers.
Feather-light long green shawls
which almost go down to the ground are wrapped around the dancers' necks.
They float around their bodies, while the Tenerife carnaval chicos (guys) move to some rhythm we may imagine as Salsa or Samba.

Fashion of many an era may be admired during Tenerife carnaval, indeed.

You will see many a girl made up as bruja, which is
a carnival witch in this context.

The one shown here is wearing a green and black outfit.

She added some red color under her eyes to give herself a more scary look.

She is holding a long broom, you usually see in rural areas.

It has a wooden stick and the rest is made of straw.

Sorcerers or brujas (witches) are always high carnival fashion in Spain as well as in Tenerife. 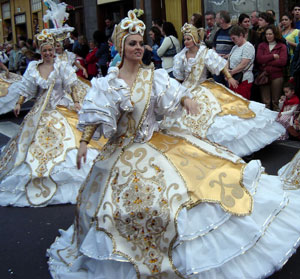 Notice the ladies who take part in a dancing group in the picture beside. In this parade they wear so called carnival wire dresses which you will not only admire with Tenerife carnaval queens.

Can you see the curvy
shaped bottom of the dresses?

They are reinforced by metal rings about 5 inches before they reach the floor.

This makes this century old fashion, almost, authentic
and gives it more interest.

Only the turban style head gears which cover too much are different. They match the rest of the costumes, however.

The stunning dresses are white and embroidered with gold.

From Tenerife Carnaval back to Tenerife attractions carnival which give you time tables of the big celebrations where you also learn, why they draw so many people with all sorts of festivals. There, you also hear of one big disadvantage of the fabulous wire dresses.

The carnival guy was one of black dressed men during a burial of the sardine.

He is not necessarily a gay man,
although, he may look like it in his carnival outfit.

A large tatoo is on one of his thighs.

An ethnic necklace hangs from his neck.

A thin, silvery band is wrapped loosely around his waste.

Those were the only carnival accessories he wore besides the light black costume on his body..

Tenerife Carnival has facets for everybody, you know...

His costume was stylish in its simplicity, also, as it only covered half his upper body right up to his neck.
The man with the silvery long, curly wig had all the good reasons to display much skin of his athletic body with well formed arms and legs. 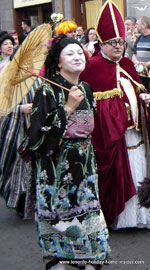 Notice the lady dressed as a Geisha...
Her face looks like covered with white clay.

It seems to have Asiatic features, by the way.

Her black Kimono looks genuine with a prominent flower print in two shades of blue.

Her Kimono is tightened under her breast by a
wide cloth band with pink design.

The custom and fashion flair of this Japanese costume is complimented with a real Japanese rice paper umbrella.
The smiling lady holds it opened up, to show off its wooden structure and dainty design.
Only, one can't see the typical back of the Kimono.
Generally speaking, this is a very beautiful carnival Geisha.
The man with glasses who walks near her looks like a real bishop in purple red and white. His Mitra is not amiss. However, what a contrast of Eastern and Western cultures is depicted by the two persons in this carnival parade...

Admire the carnival musician who was one of many men dressed up alike.

Notice his elegant white suit which covers him from the top down. He seems to have opened about 3 or for buttons of his shirt to get some air. His sleeves are puffed up in a style I am not able to describe.

A triangular part of the outfit is tailored over his upper body and then curves up over his one hip.

This accessory is intricately embroidered with gold ornaments on edges as well as all over.

The little musical instrument he holds in his hands is not much bigger in diameter than a side plate.

It is a tiny percussion instrument, such as is used for Tenerife folklore music Tenderete.

It is called a Tamburo to the best of my knowledge.

The man looks like he pays much concentration to the music he plays. 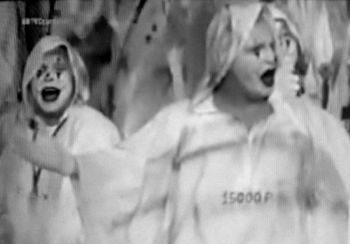 Murgas of the satirical carnival

Murgas of male or female groups that are normally made up like clowns are a typical but very important part of the carnival in Tenerife in all its towns. The Murgas are the Spanish epitome of freedom of speech.

Discover that the Rio de Janeiro Carnival is indeed different without Murgas here.

Hoping to have given you some ideas on how you could dress up for Tenerife Carnaval I will leave you until next year. See you there...

Book your accommodation early, though...

Find one of inviting hotels Tenerife to relax in when you don't explore carnival on the biggest of all Canary Islands. You will be surprised to discover a huge hotel choice.