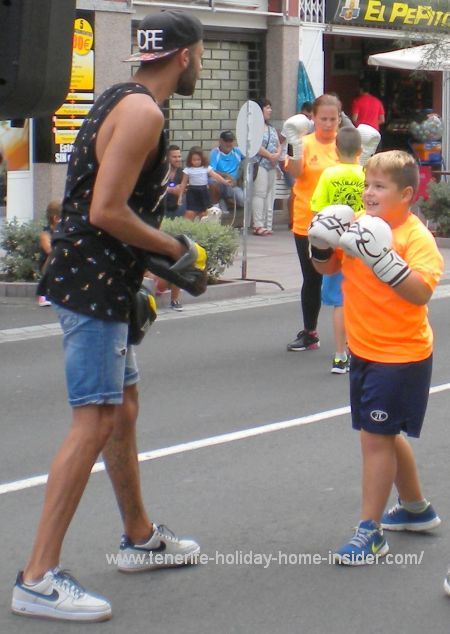 This Tenerife festival of Toscal Longuera has gone a long way.  The little kickboxing scene in the photo will make more sense to you just now.

In fact, this street Fiesta  by Puerto de la Cruz started quite differently in 2009. Then the motto was "The street is ours" meaning the street became part of business, such as bars, restaurants and stalls for locals to sell anything. 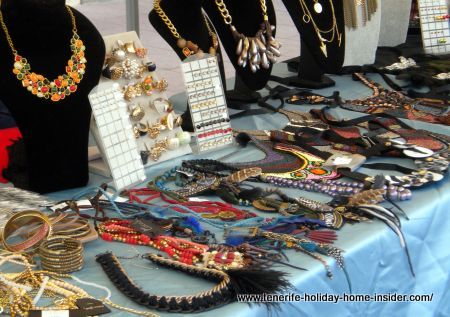 Tenerife fashion jewelry
There were not that many stalls in 2015 like in 2009.

But one with Tenerife fashion jewelry caught many a person's eye. A lady bought a very unusual necklace. It was part of interesting craft works. Its blue feathers matched her long blue hair to the t.

In 2009, stalls were just one of new business ideas at the time to help the economy. Then, they were also meant to engage young people more and to promote self employment.

In the end, Fiesta which also means Party time became the driving factor.

They say that Kratos Gym helped much with the festival's set-up in 2015 and introduced the sports for business idea.

By the way, a young man called Elam in the forefront of the workout demonstration seems to be Elam Ngor. He's made himself a name for international space and kickboxing already. 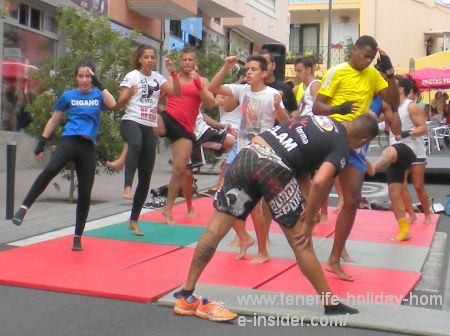 Zumba in Tenerife a sports business? 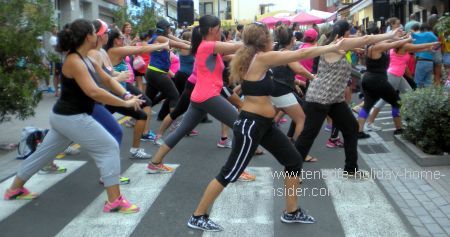 In fact, a Zumba dance workout took people's breath away when they performed on Saturday afternoon of September 19th in 1015 in La Longuera.

Needless to say, the energy of the show was electrifying and to label the fitness exercises sexy would be an understatement. People were amazed that something of such powerful impact was happening in a Relalejos street.

A Tenerife festival for all ages

Much had been provided to keep the very young ones interested. More than jumping castles had been put up. 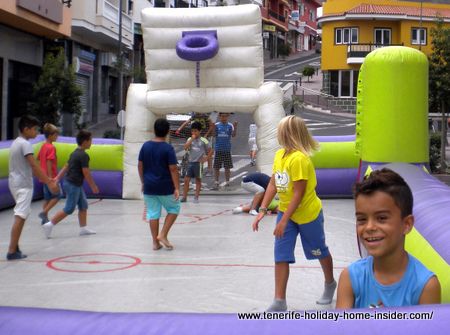 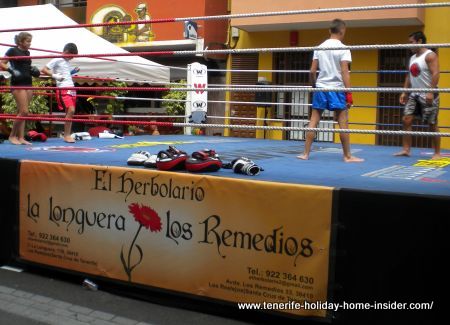 Sports Podium
All sorts of Marshall arts were presented on a large sports podium A local shop for herbs and health product displayed its banner on it. Kratos Gym Marshall arts Association was marked on the other side. Absolutely, this Tenerife festival was the ideal occasion for top promotions in La Longuera.

Later a group of kids gave a Karate Kata performance at street level.

Of course, bars and restaurants had a ball, while rhythmic, modern music came from powerful loudspeakers. Special food and drinks were the order of the day at highly reduced prices.

La Longuera taperia
The fairly new La Longuera Taperia had even more Spanish Tapas in its chiller. All was ready to spoil the people, some of which had even come from far this year.

From Tenerife festival back to la Longuera