Tenerife in May more and more attractive

Tenerife in May is known for its general warm and sunny Spring weather of about 23 degrees Centigrade. Then, the ocean water has about 20°C. Pleasant for swimming. But there is much more to this glorious month. 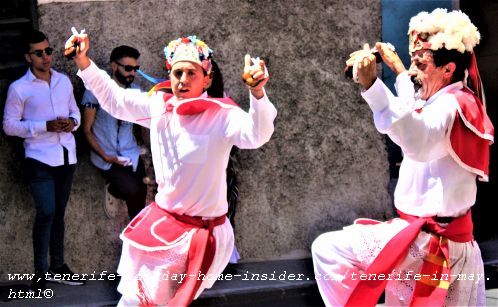 Tenerife in May Fiestas de Mayo Los Realejos with unique, memorable street dancing where joy excels during the Romeria Chica on May 15 and the main one on June 02 when the depicted dancers perform 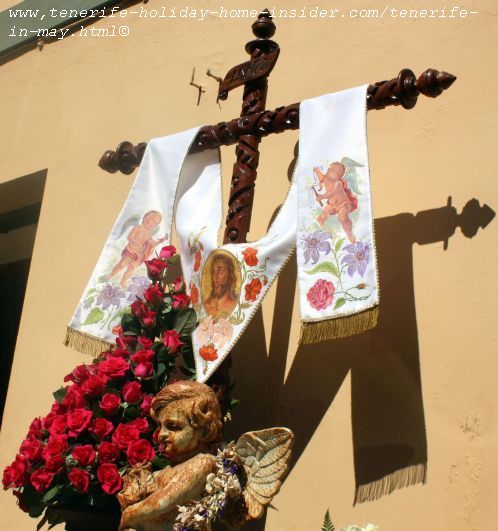 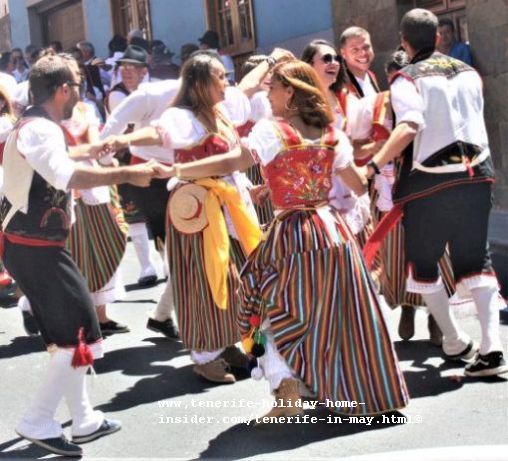 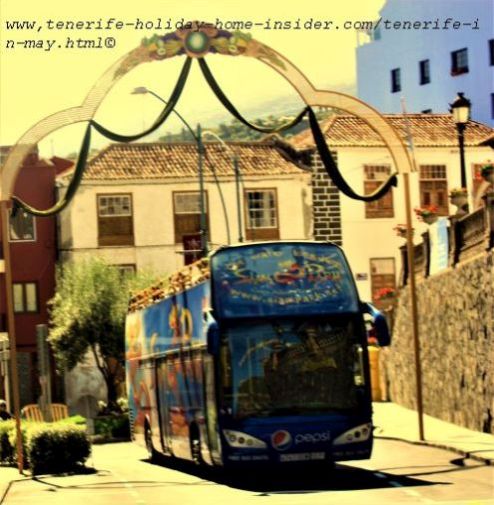 So far, Los Realejos tops all with its Fiestas de la Cruz with its Fuegos the longest fireworks of three hours in Spain. The festivities start in April and transcend May well into June. Their importance has won them the BIC (bien interese cultural) rank of Public Spanish holidays. 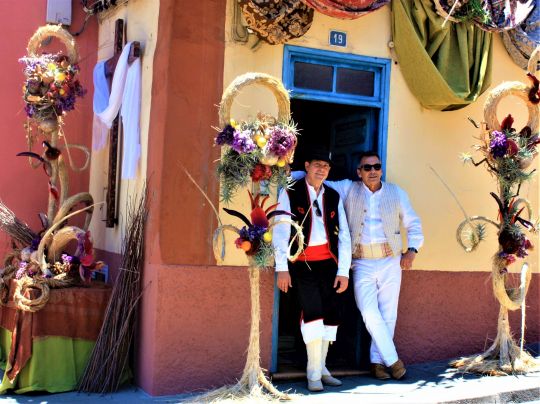 Tenerife in May welcomes foreigners and all tourist most warmly 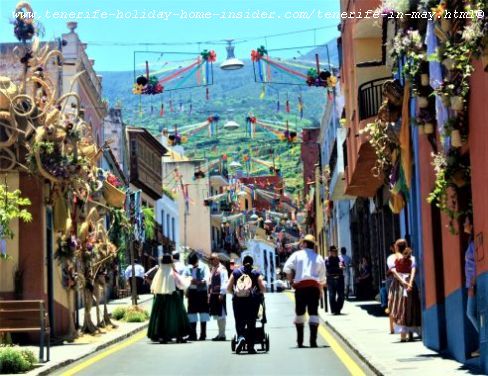 Tenerife in May in highly picturesque Los Realejos festivals 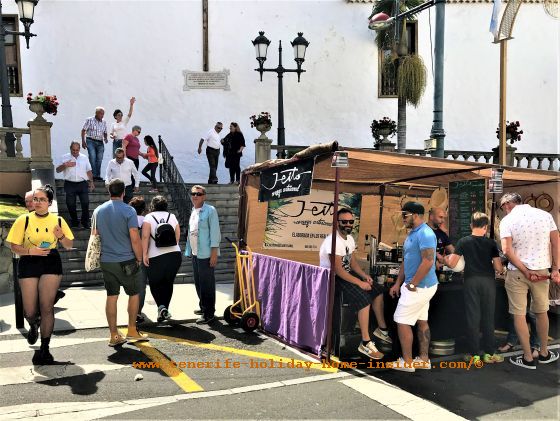 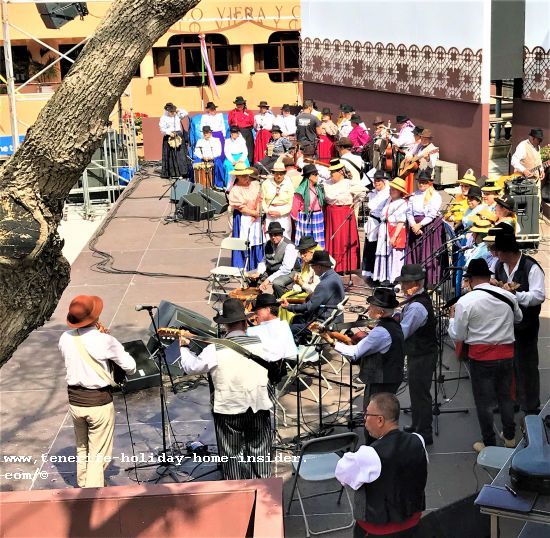 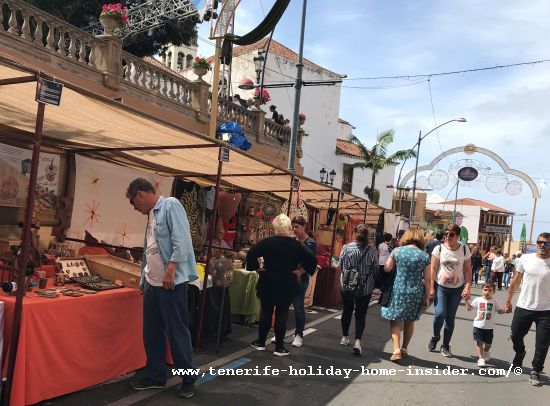 Tenerife in May crafts fair in Realejos where craftworks as well as homemade food, such as cheese and pastries are sold

May celebrations in the Tenerife capital 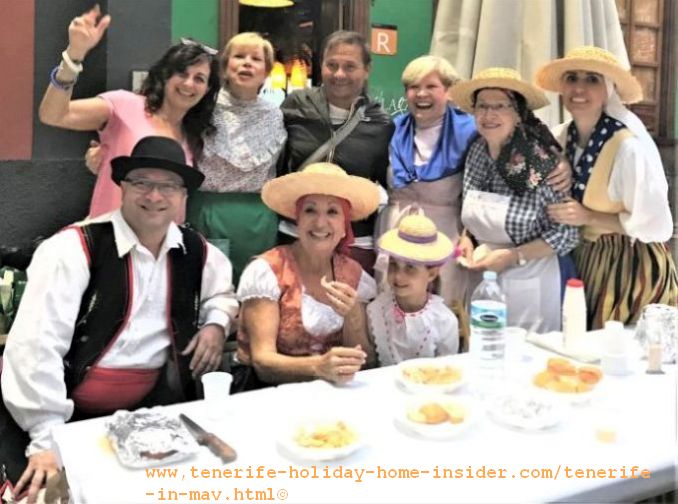 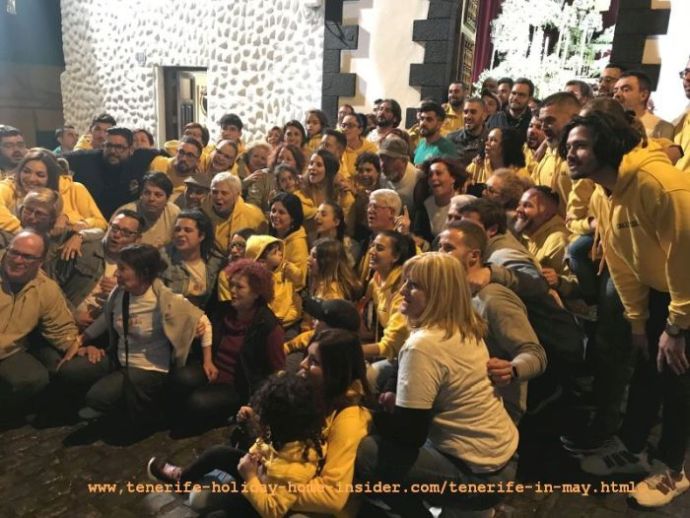 Mind that the Fiesta of the Cruz (cross) in the Tenerife capital with its Baile de Magos and other street folk activities in and around Plaza de la Concepción and Calle Noria is also a breath taking spectacle. 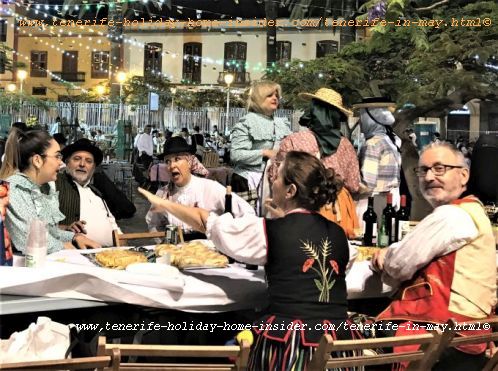 Only my Yes would have been required to join the friendly locals and to be dressed the part, of course.

There, the top locations of  competing displays of decorated crosses are the town Ramblas while the main Rambla is the most prominent. Not only school children but also organizations and even government department can win prizes. Clinica Tamaragua of health Services was the winner of 2019, by the way. Of course, all Christian temples and chapels take part. Close to 100 activities of these Fiestas de Mayo which stretch over most of the month now also feature the novelty event Dia del Comic on May 11. 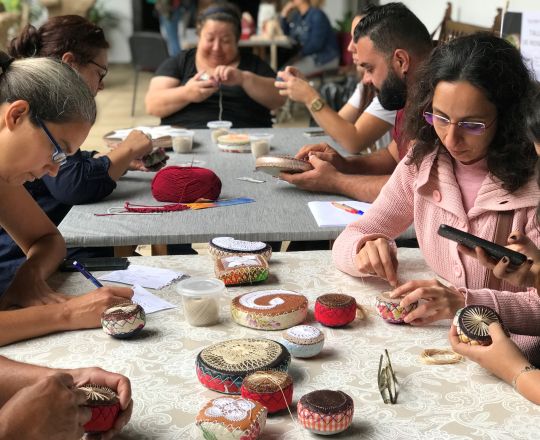 Festival de la Lana de Canarias in La Orotava with a workshop at MAIT museum on May 17, 2019 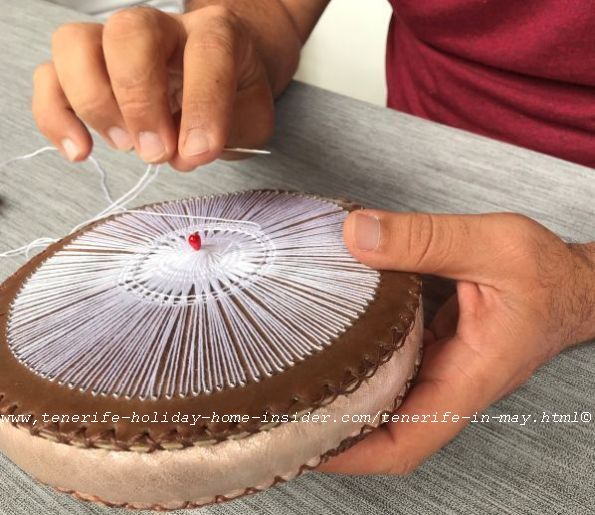 May 17 at 6.p.m.at museum MAIT Orotava: Talks and discussions in Spanish as well as a Round Table hosted by the Tenerife Waldorf School related to wool in various contexts. More info and a chance to take part at www.festivaldelanadecanarias.com 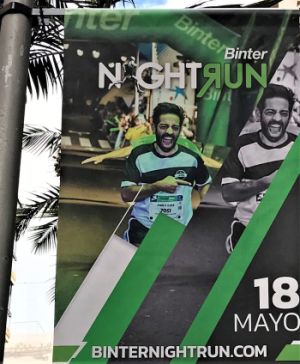 Joven is a talent contest organized by Heineken with theme "Back to the 80's. Renzzo will be selector together with the Ayuntamiento. The venue will be on May 17 at 7p.m.

May Book Fair in the Santa Cruz Tenerife capital

The Island Tenerife in May dedicated to all cultural activities

They are Folklore, classical music, dance, literature, museums, workshops for cooking and crafts, theater, storytelling, you name it.

There are not only art contests for children but also for adults. Even prizes for best crafts will be awarded at Parque Garcia Sanabria. 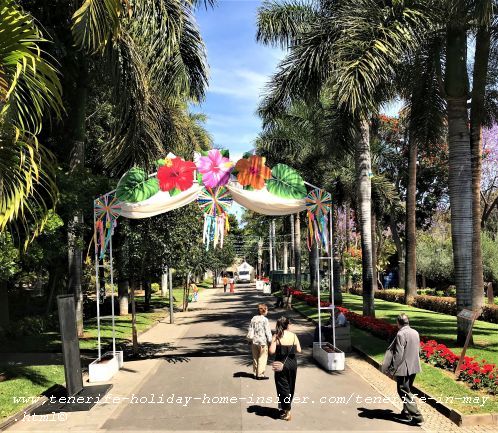 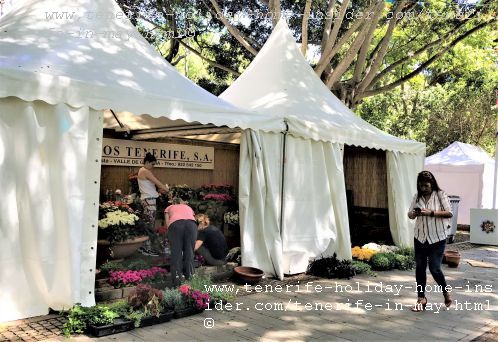 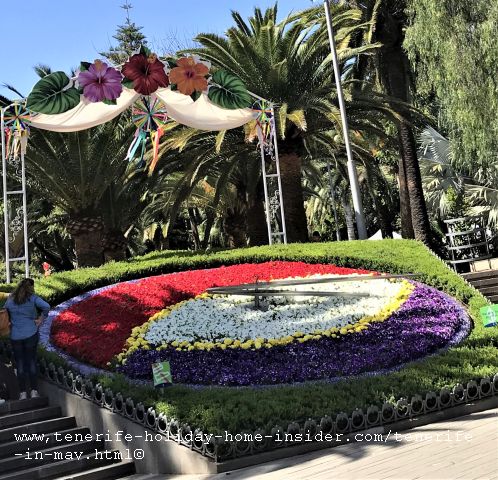 There, the amount of stalls have evolved into a proper fair ground for crafts over the last decade. Mind that plants and books are part of the interest of visitors. 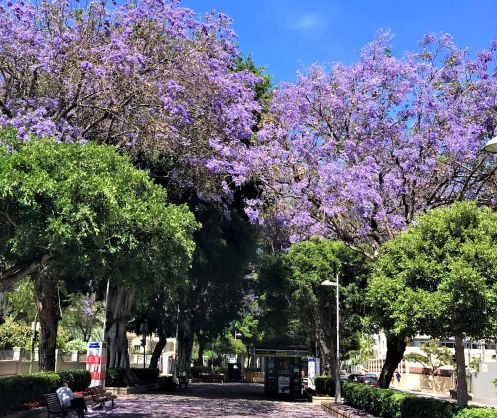 Tenerife in May of 2019 with La Rambla Jacarandas. Click to learn more about this important Rambla 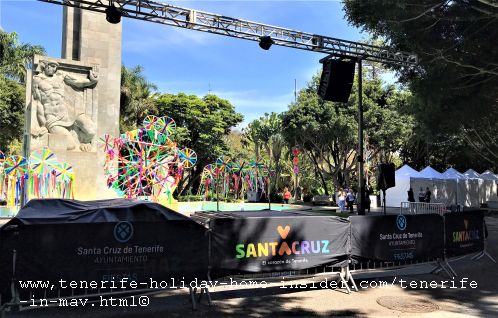 Tenerife in May Walking Festival

This international hiking Festival of Puerto de de la Cruz with many guided tours from May 21- to May 25 has become very popular, although it is fairly new.  Unfortunately, the Teide hike, the one at Benijo and the night star gaze are already fully booked.

May 18 at 11.00 San Andres guided tour
A culture walk to historic houses in the ancient "antiguo Valle de Salazar"

This popular folk Fiesta a patron festival near La Laguna has been postponed by five days due Political Elections on the last month of April 2019. Take the Titsa bus 015 to the "Intercambiador de La Laguna". Then change over to bus 051 to Tegueste. Verify "Hacia Tegueste?" to Tegueste again with the driver.

More about the Tenerife Fiesta month of May

Important in the fifth month of the year is also Puerto de la Cruz. Like Los Realejos, it combines the Fiesta de la Cruz with patron celebrations, followed by the Mueca Festival a little later. More about all that at the Page about May celebrations where you also find a link to the total government agenda of the Santa Cruz Fiestas de Mayo.

From Tenerife in May back to May celebrations 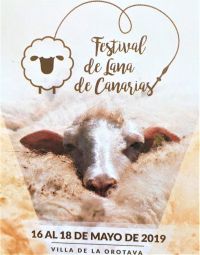 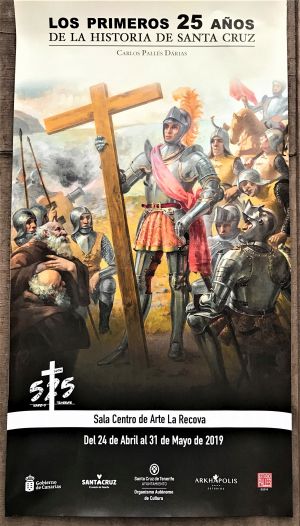 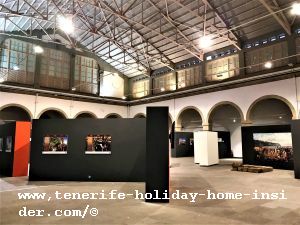 May 01 Dia del Trabajo the Day of the Work

Celebrate the time before Worker's day by a new entrance free all night dance party which is bound to be repeated in 2020. It takes place at the Santa Cruz Municipal African Market Nuestra Senora de Africa

About the walking Festival here 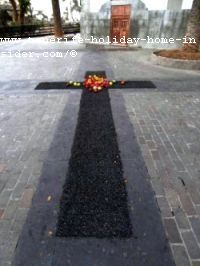 By the way,  we have mentioned the most attractive events of May, which doesn't mean that other little villages and towns don't have patron fiestas and Cruz celebrations themselves. Guia de Isora in the South is one of them with many artistic skills. I've only been there once, a long time ago,  when skies didn't enhance my photos.