What did we discover at Tenerife souvenirs Masca in this great village?

We only paid a short visit to Tenerife souvenirs Masca to show it to our friend Beate a tourist on vacation from overseas, in August 2008. 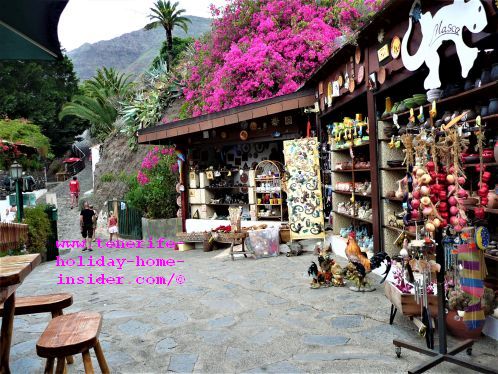 We were very lucky to find parking, by the way, which is nowadays a Masca problem on most days.

Why did we make the journey short? 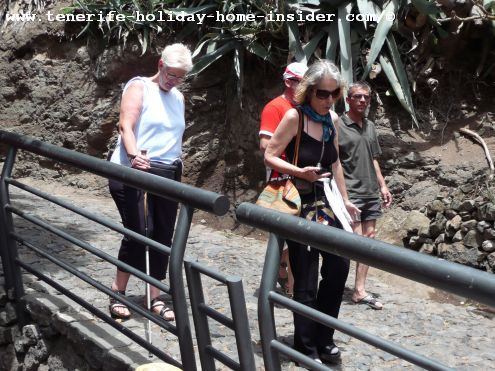 Beate was a handicapped tourist because of a hip operation. She bravely managed the cobbles of the cumbersome Masca road bridge.

The shop with the articles to remember Tenerife was relatively fast to reach. It was ideally located with its panoramic views.

A superb spot for Beate's well deserved rest over a welcome refreshment.  No need for her to walk futher down into the village... 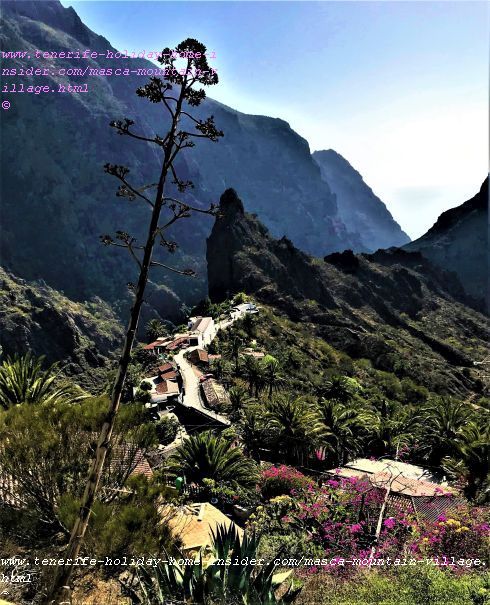 The romantic Masca mountain village is full of hills for most demanding hikers.

However, not only adventure on foot is famous there. The nearby mountain road TF 438 with its rugged cliffs and hairpin bends has become a famous trek for endurance cycling for Tenerife and all Canary Islands.

Do you want all that as a virtual adventure?

The look-out at the Tenerife souvenirs Masca shop gives you free views to the rocky peaks behind a picturesque hamlet, like on a silver platter.

Tenerife souvenirs Masca and the Ferry

The souvenir shop is one This shop is one of first focal points you notice when you enter Masca Village. A billboard with a ferry timetable used to be by the restaurant entrance. 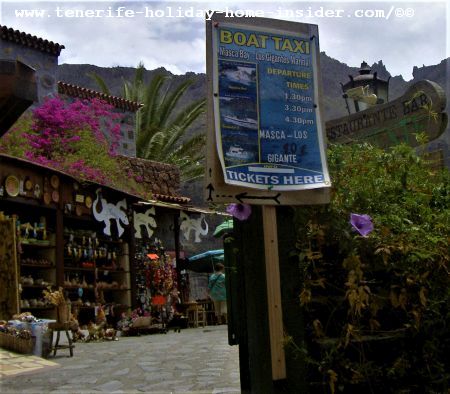 Only tour operators take tourists on ferries now, while conditions are strict now. Why? Too many Masca gorge accidents...

My friend Guenther joked about it when we were taking refreshments at the shop of Tenerife souvenirs Masca.

He said that you have to let yourself down on a rope to descend to the sea shore of Masca. Visualizing heavy Guenther on a rope is funny, indeed. However, that rope adventure was only an option after the Masca fires of 2007.

The Curio shop only advertises a restaurant above this sign post. The shop itself doesn't need to lure people to come.

Both shop and restaurant have been enlarged and offer more choices than before. Even a generous seafood platter is now on the menu, a sample of this is depicted below. Extra waiters and souvenir sales people provide service. 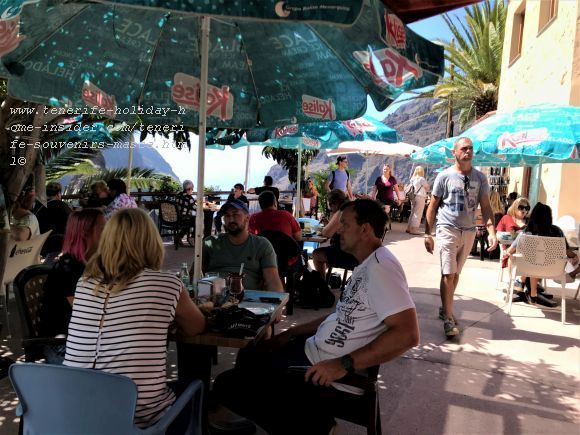 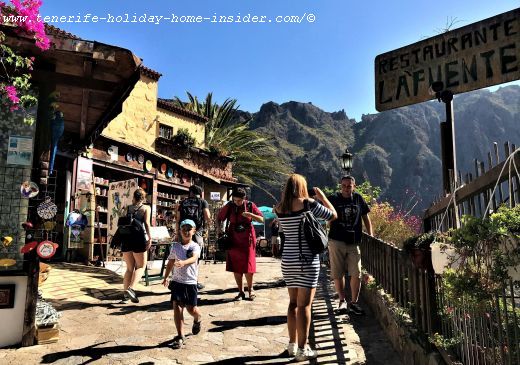 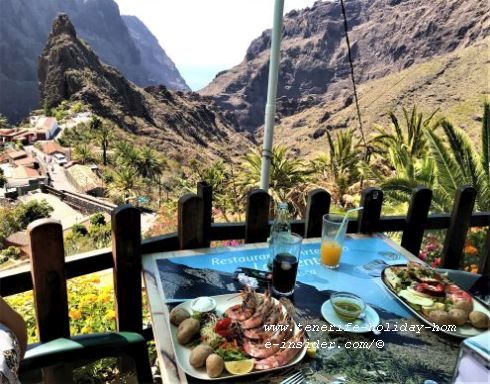 Its colorful shop front displays more than enough for great attraction. You will see it from a different angle, though, and not from where I took the photo of boat times.

You could buy ferry tickets there but, I strongly suggest to book online with a tour guide, in advance. (Mind the hiking path through the gorge to the Masca beach may be closed temporarily, as was still the case beginning of October 2019) 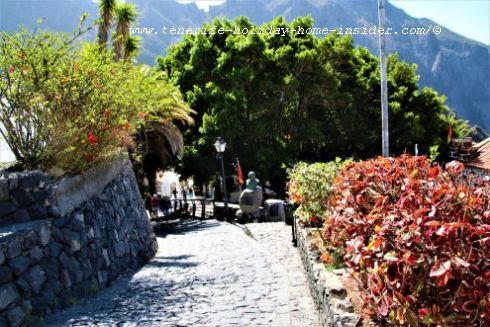 No wonder! The shop founders must have been inspired by the ravishing surroundings of the legendary pirate village Masca of the mountain massif by Los Gigantes. Pirates may have taken refuge there long time ago indeed, when Garachico was still an important port in Tenerife.

The shop's big front looks like plastered with articles fit to be best Tenerife gifts to take overseas. Besides, it's bigger inside than one would guess. The whole ground floor which might have the length of about 15 meters is shop. Also, it's stocked right up to its ceiling, almost, like a 'Todo 150 Pesetas shop' used to be.

Beate and I in Masca

When my handicapped tourist friend Beate and I were at shop Tenerife souvenirs Masca Beate spotted, immediately, something catching her interest outside to the right of the shop.

She discovered professional hiking canes or hiking sticks that could be adjusted by size and folded to store in the car boot.

They had a compass built in at the top end.

They came with different looks. Beate liked them with brass features, best.

Who would resist any cost near it when a 2nd stick would come in very handy for somebody who needed a hip operation like my friend? Also, this inviting treasure trove for buying souvenirs has a few tables with umbrellas outside from where one has an unforgettable captivating view of a great part of Masca.

Our friend Guenther who was sitting with us outside the souvenir shop, suddenly, pointed down below our veranda where he had discovered a Masca Museum which represents a small, old school for Guanches who were the native neolithic people of Tenerife. He didn't know that this museum was closed many, many moons ago after a fire and also at different premises for lack of pupils at Masca, as I discovered later.

The lovely lady of the shop for Masca souvenirs which must have been the owner brought us yummy chocolate and almond cakes. Coffee and cool drinks went also well with it because, Masca was warm on that day. Nothing unusual in Masca, which is renown for its exceptional, tropical Tenerife climate. There, it is rather dry and pleasant and makes it a most unusual village of Teno mountains opposite Africa.

What else does the shop sell?

We were so preoccupied with our lucky cane that we never even looked at other price offers of the shop. It's up to you to find those out, now...

Tenerife souvenirs Masca, by the way, also represents the value of an extraordinary location nobody will ever forget. Its sight alone stays imprinted in every tourist's mind as something which can't go astray, broken or wiped out unless by loss of memory in the physical sense.

By the way, friend Beate was not only taken with everything that she saw of Masca, besides its shop but, also loved its whole island. She was also much impressed by Arona. There, we passed by at night before we returned home from our trip to Masca and to the south.

She is now planning to rent herself a holiday home in on the biggest Canary Island to spend more extended time there with us.

Find out some route options to get to Masca from different directions by looking at the map of Buenavista del Norte ...


From Tenerife souvenirs Masca back to shopping in Tenerife