How Tenerife tourism 2012 and that of Puerto de la Cruz improves visibly.

The recent Tenerife tourism numbers for the biggest Canary Island for January 2012 were 399,778. That's an increase of 3,7% compared to January 2011. Last year brought a record for the whole island, as there were never as many British people holidaying in the South since 2005.

February and March 2012 haven't been made public yet. 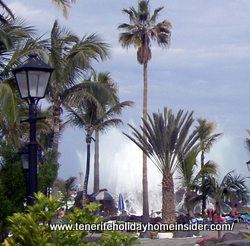 Anyway, tourism of the most picturesque harbor town of Tenerife North is picking up visibly, while the south is most probably still in the lead. My friend Cesar told me in March that he seldom saw such tourist crowds in South Tenerife before. But lets talk about Puerto de la Cruz.

Tonight, some news confirmed my latest impressions about a touristic invasion there. Only impressions?

Well, my neighbor and his wife came back from an outing in Tenerife North. By the way again, the weather was a delight for our foreign visitors. The couple had been to San Telmo. That's Puerto's central beachfront. There, the Lago Martianez has been the biggest tourist attraction for half a century.

So what's new in Puerto Cruz?

My neighbors reported that yesterday, one day before Easter Sunday, this location looked like a record for Tenerife tourist numbers.

Nope, I don't think that something was to be had for free in the  tourism hub of the North of the island.

The Semana Santa which means the Holy Easter Week is generally drawing visitors, as this is also a major holiday season all over Spain.

What complemented the unusually many Easter visitors?

Anyway, there were almost as many policemen as holiday makers by San Telmo.

The oldest Tenerife resort does its utmost to protect its visitors. There are too many unemployed people on the island, so it fears. 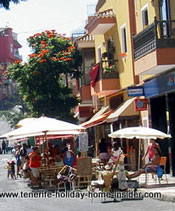 By the way, I met a large group of French speaking foreigners at the hotel Panoramica Garden of La Longuera by Puerto Cruz in Toscal Los Realejos today. A couple of them told me that they were due to catch a bus. They were excited to go on a tour. No, not to el Puerto... The hotel which organizes not only day trips for its guests, only drops them off there. Indeed its tours go to other locations.

Just figure, the French people would also have been to San Telmo and Martianez... Then, a bigger police force would have been needed. To protect them... Just kidding.

By the way, one of Tenerife fans just answered our ezine, which is our monthly newsletter. The lady said she had just returned home to her country from Puerto Cruz. She said she wants to come back soon. 'The many nice balconies of apartments and houses of Puerto look so inviting', she wrote. So what's that got to do with coming back? She wants a holiday home in Tenerife for at least two months. That's why. She loved Puerto.

The holiday home seems to be as important for Tenerife tourism as cheap flights.

Cheap flights to Tenerife are bound to cost a bit more from June 28th onwards. It's unlikely that there will be a big difference, unless flights go through Madrid Barajas which is going to up its airport taxes substantially. Airport with flight service charges will be in the region of 0,63% - 2,40% for Tenerife. That concerns Tenerife tourism together with its other small islands like La Palma, El Hierro and La Gomera. Mind that Tenerife only has its tourism income. Learn more about those changes at our topic with general airports information and find out about those new airport taxes which were implemented by AENA by the middle of 2012.