The Tacoa Beer Hall with beer garden and more.

Beer hall is the best expression for the Cerveceria Tacoa Bar and Restaurant of El Sauzal Tenerife.

This Cerveceria beer place for going out and for events  is so big. 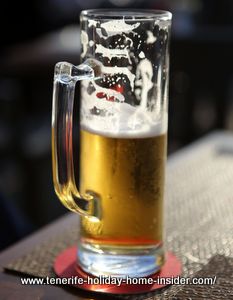 Beer in a glass
And its bock beer is so good.

The five home made Tacoa healthy beer brands are all brewed on its premises. Their beer brewery strictly follows the German beer law which dates back to the year 1516. This means for beer purity that no chemical beer additives are allowed.

Watch home made beer brewing live at the Tacoa beer restaurant. There, the German called Jochen is the main actor of this living beer museum. Watch his beer making of bock beer of different sorts.
Find out when he uses barley and wheat for making his brew...

In fact, sample all authentic Tacoa drinks in their handsome beer glasses. 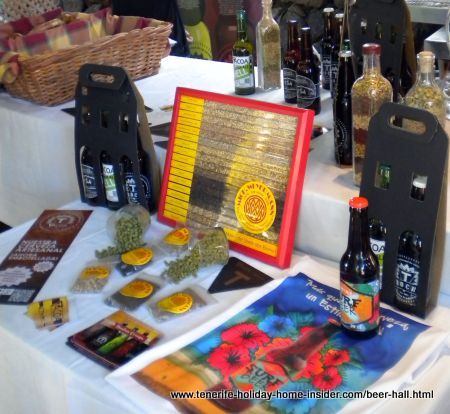 What's special with the Tacoa for Tenerife food and drink? 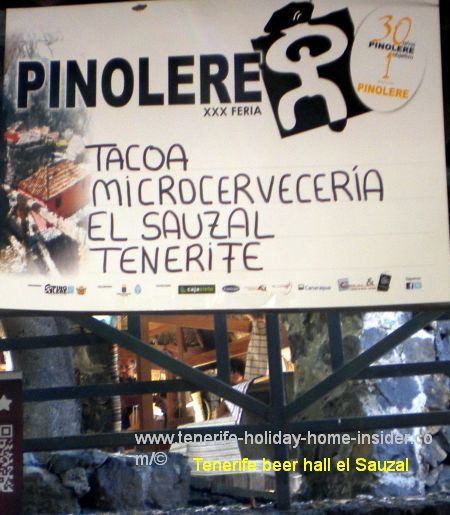 Tacoa Microcerveceria Pinolere stall
By the way, cooking with beer, such as Tacoa beers is also delicious for grilled pork sausages on your BBQ.

Beer sausages with onions and tomatoes

El Sauzal Restaurante Tacoa is a typical example of how German cuisine complements Tenerife food and drink for most charming results. There, the natural carbohydrate food supplement Gofio of Guanche traditions, healthy potatoes called Papas Arrugadas, although coated in brushed salt, and Mojos or Salsas Canarias (slightly spiced sauces) will not be amiss.

Spot Garbanzas, Spanish Olives and Cerrano ham where its best brand called Pata Negra is delicious with a good bock beer. Also sample any local cheese with Tacoa beverages. It may be fresh, semi cured or totally cured goat cheese. Part of it may be made with cows' milk. It may even be produced with the milk of sheep. All are perfect meal starters with healthy home made beer, such as the one by Cerveceria Tacoa.

Notice that it is interesting for Tenerife insiders that this Tacoa beer hall Beer museum is in the neighborhood of the Wine museum la Baranda El Sauzal for Tenerife trips, many of which for eating out.

Contrary to the Tacoa beer bar and restaurant is Cerveceria 7 islas in Tenerife with its top international beer brands.

From beer hall back to best Tenerife restaurants.

Discover what a good UK Ale is like here.