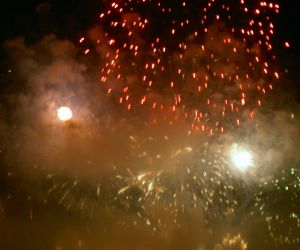 Entertainment Tenerife fireworks accidents were unheard of until 2008.

The municipality of Los Realejos has known how to provide fun with fireworks for a very long time. However, lately,  its Hotel Maritim comes second with its New Year's fireworks spectacle. There, any misfortune is unlikely to happen.

In 2008, friends and I were seeing the polytechnic shows of the oldest of Tenerife celebrations the Fiesta de la Cruz from a top spot above  Los Realejos Alto.

Madre Juana is on the mountain road to Icod Al Alto.  Restaurante Amerinca for events and disco dance was there at the time. Learn more about it in my general page on entertainment in Tenerife. 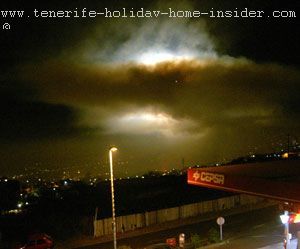 On this day of the second last of the May festival
Fiesta de la Cruz the fireworks shows didn't want to work.

There just wasn't any wind for successful colorful explosions on that day.

Not even the slightest breeze was felt, when the fire crackers were shot up into the air. It was, as if they got stuck in the clouds. They couldn't open up, as can be clearly seen in my photo.

All this happened after some days with unusual extremely high temperatures. 40 Degrees Celsius (about 80 in Fahrenheit) had been detected in North Tenerife during the preceding week.

The two brothers Toste are always in charge of the Fiesta de la Cruz fireworks. They are importers, manufacturers and wholesalers of the following company. Every year, the two compete with each other fiercely with the Realejos streets C/la Luz and C/del Medio arriba. In 2008 however, they had no luck.  All their efforts resulted in a fireworks flop during the celebrations of la Cruz.

After midnight, past 1.a.m., a little wind came up.

It resulted in some slightly better shows on third trial. However, no applause when the clouds came. 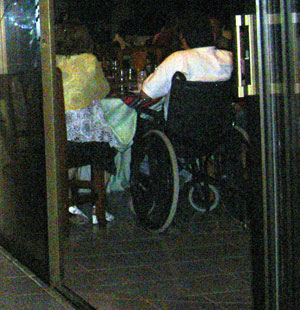 The huge balcony of Amerinca Restaurant was crowded with guests. All tables were occupied by people who watched the Politecnica, as fireworks are called in Spanish. Even a handicapped man was out there. He sat in a wheelchair and gazed patiently at the displays in the sky. Nobody was expecting any trouble, such as  accidents by the night sky explosives.

By the way, it's impossible to drive through Los Realejos Alto before the normal big fun with the town's fireworks entertainment.

Then, roads are blocked off by safety regulations.

How get to see the fun with cordoned off roads?

We were heading to the Amerinca Restaurant for it. Life music with shows and disco dancing was on its agenda. We took the coastal road from Los Realejos to Icod de los Vinos until the exit La Guancha.

This is above San Juan de la Rambla. Next, you have to turn left towards Icod del Alto until you hit the Cepsa petrol station Madre Juana.  Drive to its top. You will see the famous Tenerife night sky fun from up there.

House on fire caused by pyrotechnics.

In fact, a misfortune with fireworks happened on that day of the Fiesta de la Cruz of Realejos in 2008. It was minor but, may serve as a warning.

A building must have caught fire. We noticed it when we drove home through Realejos. There, a road where the fireworks took place was shut off.

A fire engine was parked, nearby.

Tenerife news about the fire ?

No news appeared. Hence, the accident seems to have been without importance.

What about such accidents elsewhere?

Many fireworks accidents are statistically reported in the UK.

Spain published twenty so far. There were never any fatalities in Tenerife.

Realejos May celebrations of the Cross .

Other Fiestas de Mayo in the Tenerife capital and overseas.