Where go for best snorkeling in Tenerife?

Snorkeling in Tenerife isn't a rage yet, such as body surfing. Few locals can tell you where to snorkel. However, more and more youngsters are interested into the fauna and flora underwater by the Tenerife coasts. Not all like to dive deep or have long enough vacations or enough funds for the scuba sport. 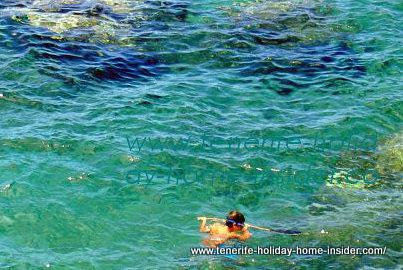 A snorkeler in Garachico
Garachico may be a good place to take your water goggles for snorkel diving to inspect what is going on below the water surface. A young snorkeler who was. spear fishing could be watched there in August 2013. A yellow rubber dingy with another youngster was floating near him in the turquoise sea. This was on the outskirts of the so called 'Caletón rock pools' of the ancient town.

Also, one of almost round tide pools near San Juan de la Rambla with mossy rocks is one of the natural ocean ponds which is deep and protected enough for exploring the fish which swim at a fairly low depth in the Atlantic.

Tenerife snorkeling near the Teno massif

You can snorkel in more than one rock pool of Los Gigantes. Strangely enough there, the best time for it is not during high but, during low tide. However, a better enclave is still to come.

So where is it best for snorkeling? 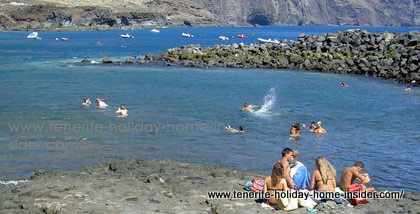 I only fully realized this when my daughter was so disappointed that the road to the Faro de Teno will be closed until at least end of April of 2014.

Good news for snorkeling in Tenerife

The Punta de Teno road opened again end of July 2015, but may always be closed temporarily when a heavy storm and rain are forecast in the region.

At least nine young people snorkeled not far from the shore when we were there. Some were floating on their bellies. This was around the corner from the lighthouse. They explored the Atlantic ocean fish which could be seen well. This is thanks to extremely good light in this part of the island behind the magic cliffs of Los Gigantes.

Actually, this Teno oasis was the hottest snorkel diving tip which we were given during August vacations of young people from Holland. We were there on the same day when we saw the harpoon snorkeler of Garachico. Its best spot for the sport is not really a rock pool as the opening towards the ocean is very wide. It's more like a small, calm bay which is protected by a curbed man made jetty where rugged lava rocks and caves abound in two places.

Snorkeling to see the turtles in El Puertito 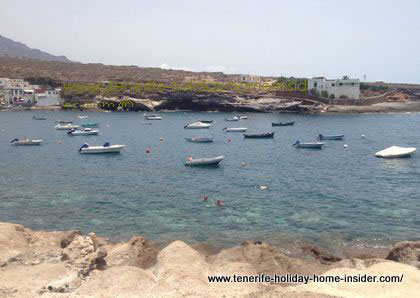 El Puertito Tenerife
El Puertito Adeje by la Caleta which can be reached via Armeñime didn't bring any such luck. I had not come along on that day to this protected habitat for snorkeling in Tenerife. Later, I was told that no turtles and not even nice fish were discovered by the group from the Netherlands. Perhaps, it was important to swim further out where the water started to reach a depths of more than 5 meters. Perhaps, the reptiles were near a small, but steep cliff.

On the other hand, it's said that the Puertito tortoises called Bobas carettas carettas may stay on the bottom of the sea for seven hours. Also, summer is hatch time. May be, the females had returned to deposit their eggs in a far away place in the Caribbean where they were born. The endangered reptiles were brought to the Adeje bay from near Punta de Teno, a few years ago. This was arranged by local people who were concerned about the extinction of the Bobas.

By the way, there were many crabs by the shores of El Puertito. Good that there are swimming flippers for all diving sports, as not to step on them.

Last not least, a good Tapas bar of el Puertito made up for the snorkel disappointment. 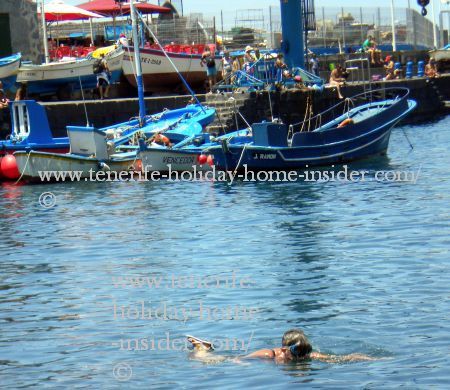 I couldn't believe my eyes to find so many Tenerife snorkelers outside the Lago Martianez of the oldest Tenerife resort. Mind that I saw them in the morning and in the afternoon. Photos are proof of it.

Links related to this article

Your gateway to unusual Tenerife tips