Tacoronte has more than the wines of Acentejo.

Tacoronte and its name indeed date back to the Guanches a people with a neolithic cave culture.

The region was ruled by Mencey Acaymo at the time of the Tenerife conquest. However in those days over 500 years ago,  neither sugar cane nor vineyards adorned its fertile slopes inland, while bananas date back 200 years. 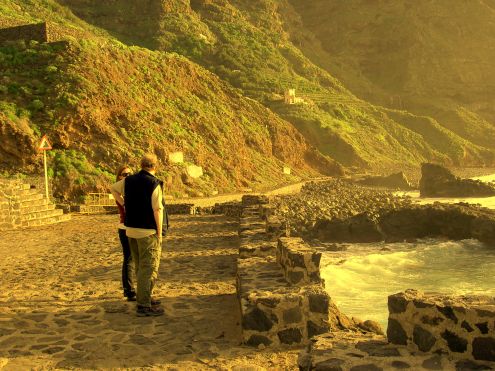 Sunny Tacoronte by its coast near Mesa del Mar.

The relatively dry, sunny climate of this part of Tenerife is most surprising. It starts at less than 4 km from  Los Rodeos but,  is a world apart  by a change in weather  from the runways of the airplanes.

Make out a white castle in the image below.

The surrealist painter of La Laguna Oscar Dominguez spent many a summer vacation there when he was a mere boy.  More about him here. 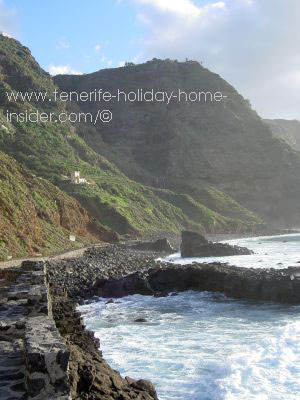 The  Tenerife holiday home insider and author of this article learned this from a native. He is a descendant from the Mesa family like the father of the artist who owned the property on the green slopes above the ocean.

Several look-outs along a pristine coastal hiking path allow contemplating wonderful bays where the waves roll in to form more rugged cliffs.  Buena Vista del Norte is on the horizon with a little luck. Mount Teide often only shows its tip,  clad halfway by its misty veils.

A 4 km long road departs in the vicinity of the municipal market and trails down to Mesa del Mar with invigorating views. 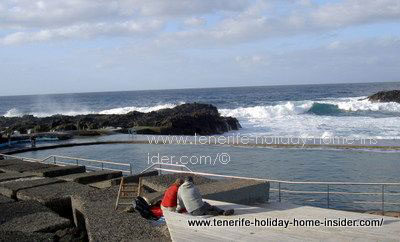 Mesa del Mar of Acentejo - One of its pools 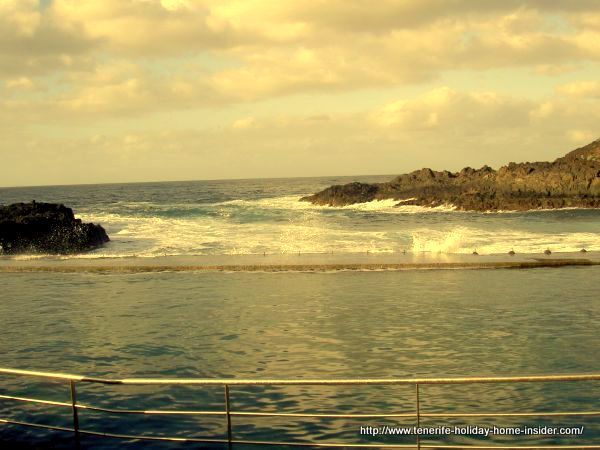 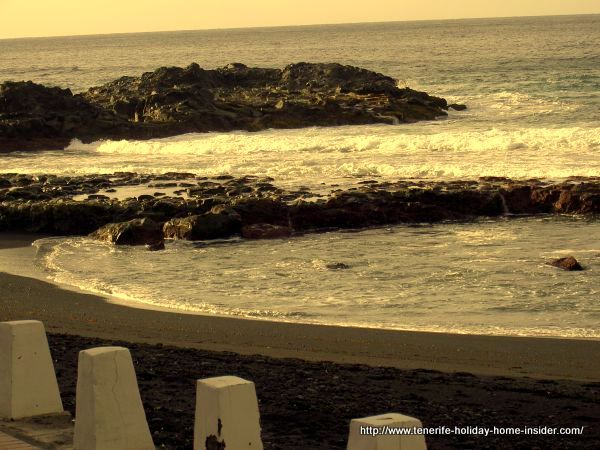 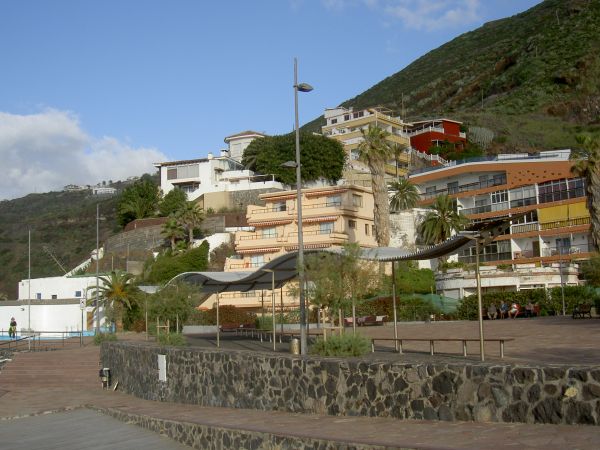 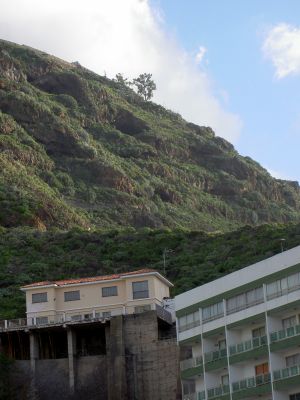 Then there is also el Pris, whose town beach I don't favour. Unfortunately Playa Lar Garañona is hard to get to, while the natural Rock pool of Tejina Jover is also more far away. Find  the latter via cross road signs to Guayonje and to Tejina.  The TF 161 proceeds to the Jover pool, later on. An alternative route is via the TF 13 via Tegueste. Awesome coastal secrets I can only dream of since my friend Guenther mentioned them.

The regions inicial settlers, such as Sebastián  (Sebastiao)Machado from Guimeraes who founded an Agustine convent and his father Lope were Portuguese. So were Don Diego Pereira de Castro and his nephew. All had been connected financially to the conqueror the Adelantado de Lugo. Such historical figures influenced much of the art, vineyard and other culture,  architecture and religious celebrations of the region. Not to forget where Guanche traditions were fused such as in some of the folk dancing.

A legacy going back to Portuguese founders of Tacoronte

Those are the certified quality wines of (DO) origin of Acentejo besides locally made goat cheese. 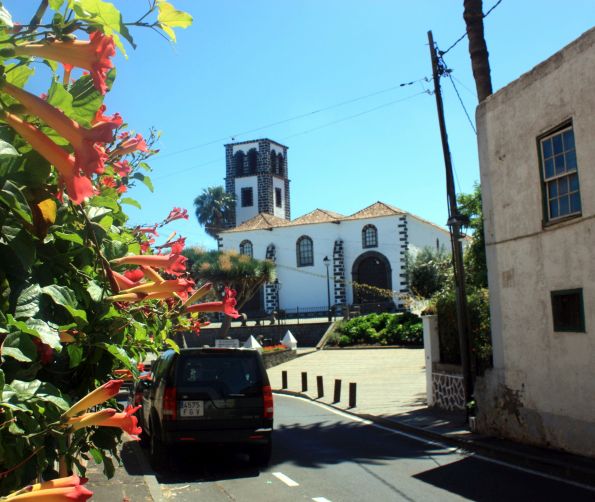 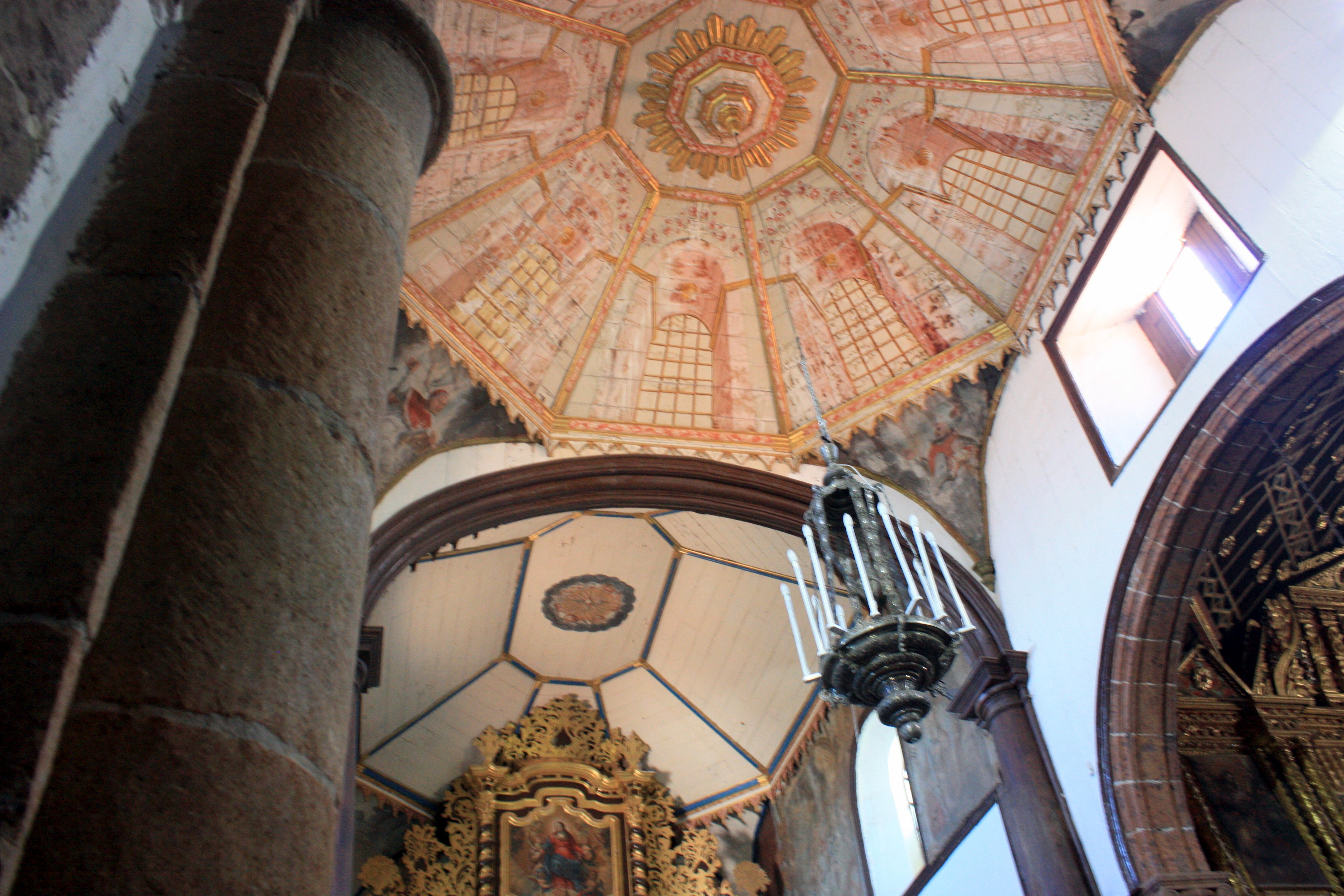 Exquisitely carved woodwork adorns the church pulpit and its stairs. A traditional TEA timber balcony beautifies a white-washed wall outside next to a canopy pathway of shady old trees. 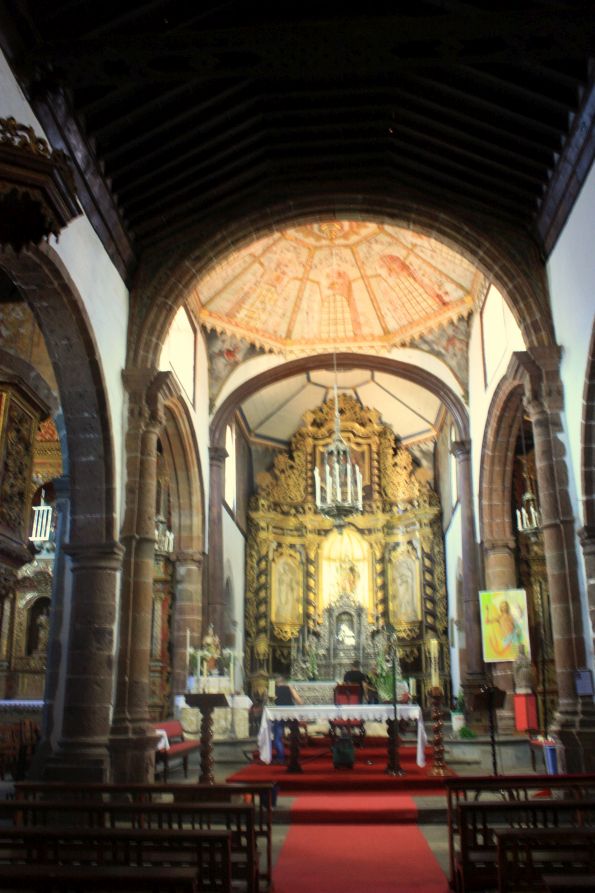 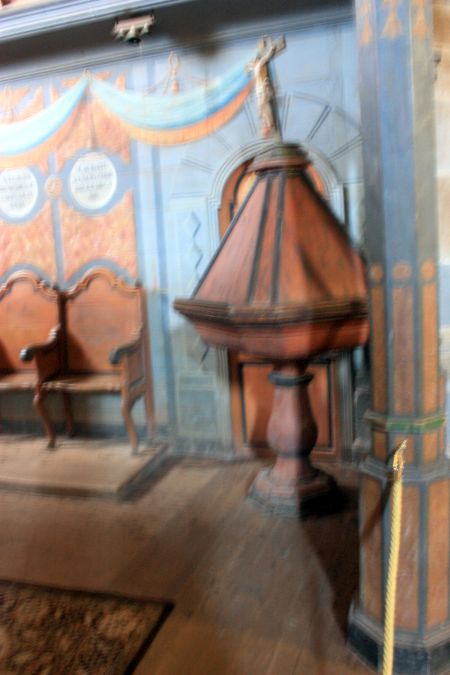 Some of this temple's exquisite paintings are by the famous C.H. de Quintana from La Orotava. Church visiting hours are on Thursdays and Saturdays from 10.a.m. to 12.a.m.  Not to forget is the large town square with Church Iglesia del Cristo and its ancient convent of traditional Canary Island architectural style.

The abolition of the Mayorazgo law of forced inheritance by the new law the Ley Desvinculadora of 1820 made it possible that properties could be bought by anybody.

This made the wine industry in the XIX century even more prosperous which led to sociopolitical changes.

Vines started to trail right down to the shores. In 1812, they formed part of an area of
30,09km2 from coast to mountain slopes. 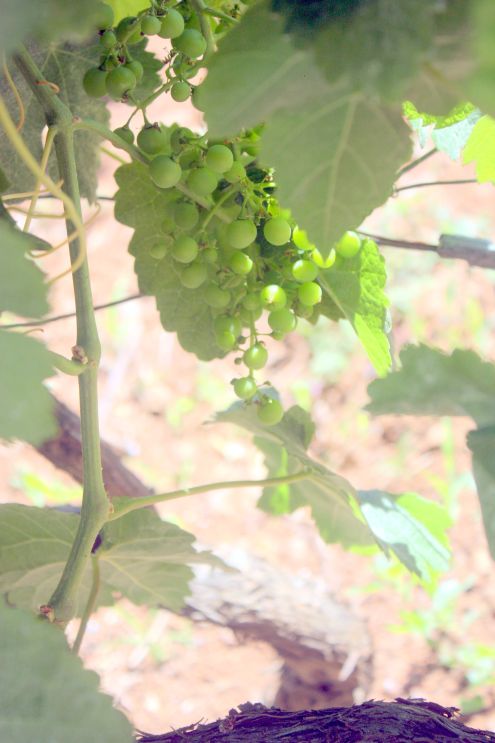 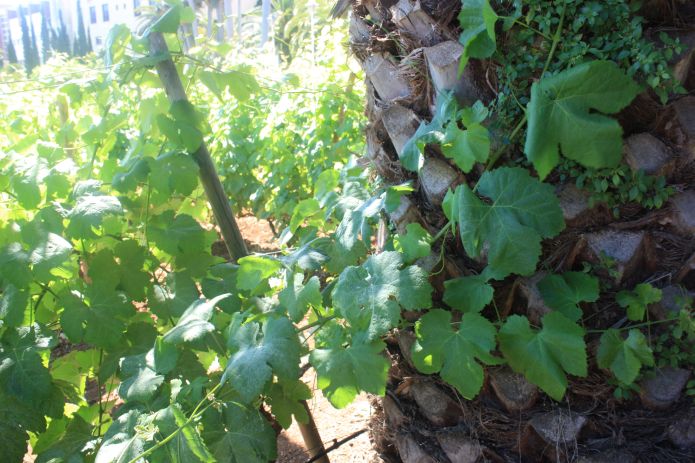 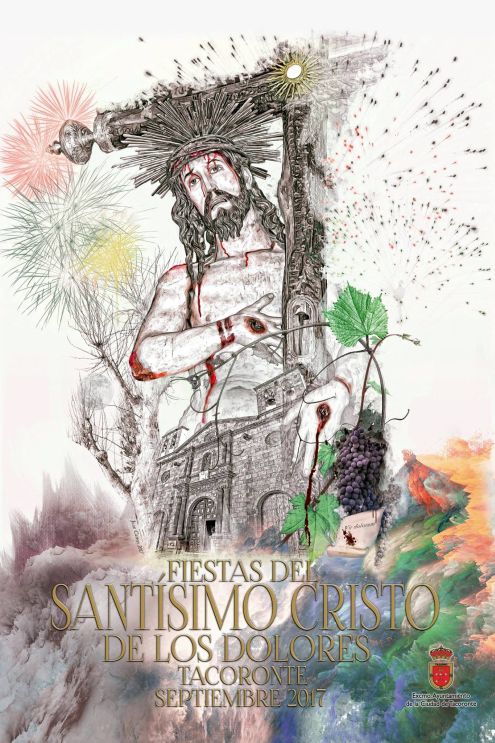 The photos of the growing vines were taken by an urban  street between Plaza del Cristo and Plaza de la Iglesia Santa Catalina of the old quarters of town. 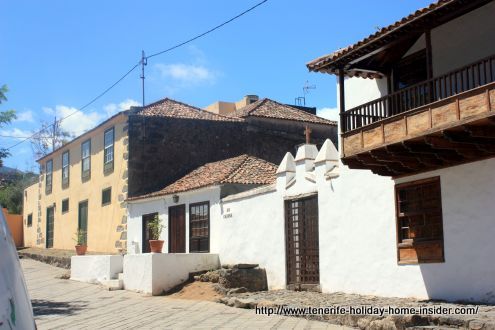 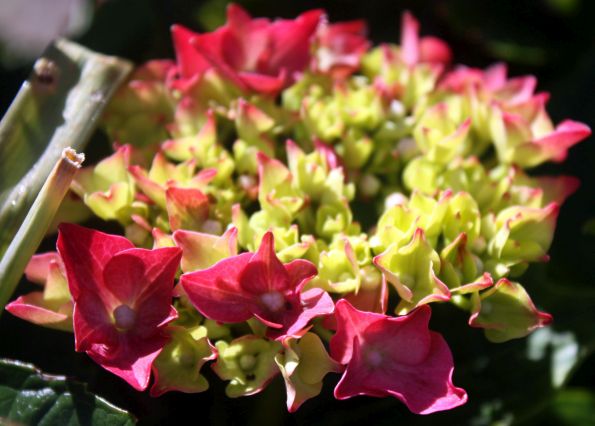 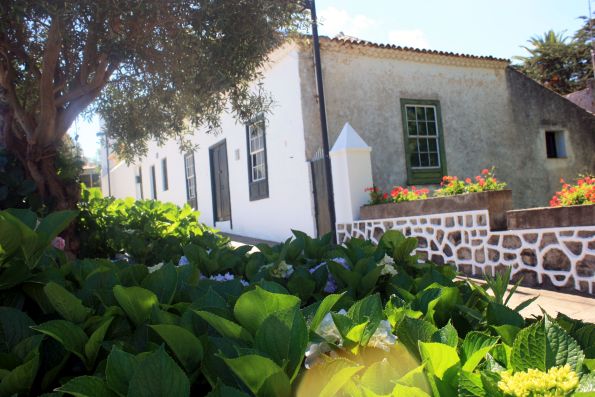 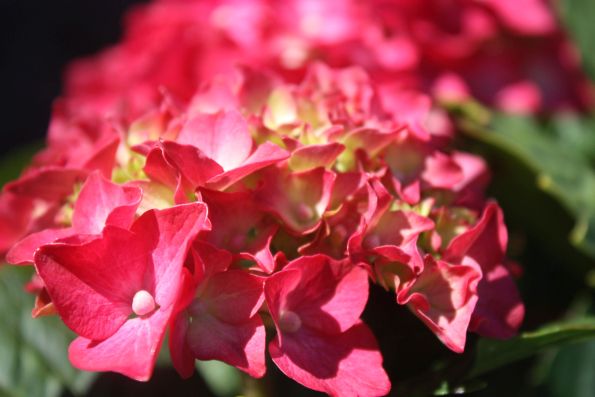 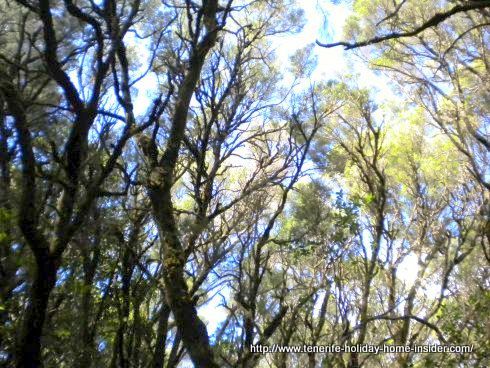 Town streets that lead to the coast including its old quarters are well marked. The Eastern rural region that reaches toward the mountain is different. 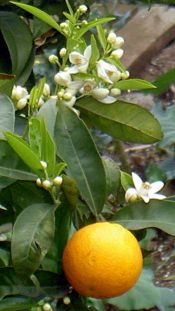 There in 2004, I once battled to find the small holding of a British lady called Julia a master of the art of living in Tenerife.  Properties were still spread out substantially in those days,  contrary to the congested urban ones.

Her kitchen yard smelled of ripe  Oranges, Lemons and Lavender which grew outside the door, while horses looked over her fence.

Why no entire bliss?

The lady told me that too many locals had left the farms and vineyards. The construction industry, real estate, tourism and related services lured them away.

Other town attractions in the old quarters. 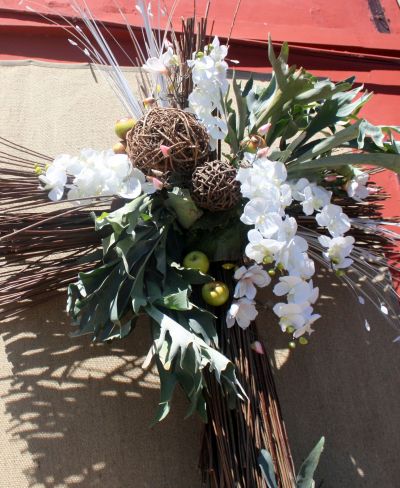 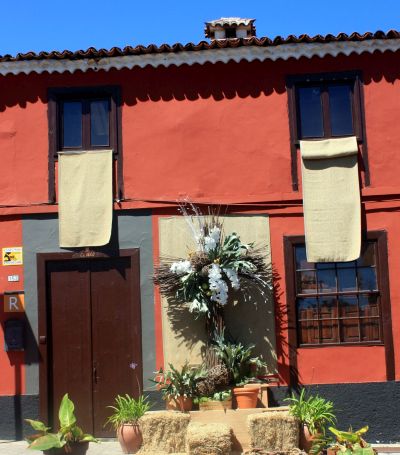 Nevertheless, many sports competitions and concerts are scheduled for both Fiesta de la Cruz and Fiesta del Cristo. Two day and two night processions with the Christ statue take place. Several Queens Reinas of art and of wine are an important part of the religious celebrations in the old quarters of town. Events of the Autum Fiesta stretch over a period of four weeks until October 30, 2017. Note a main procession always takes place after the Eucharist of 12 noon on Sunday. 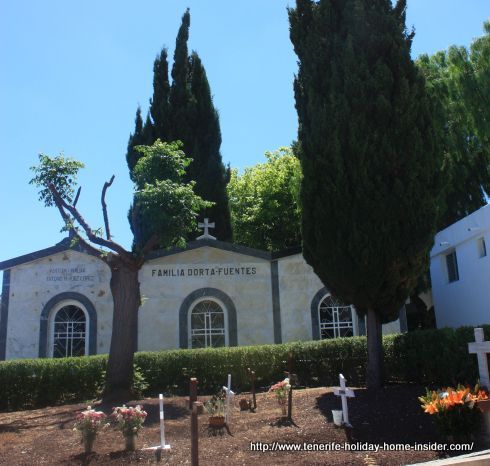 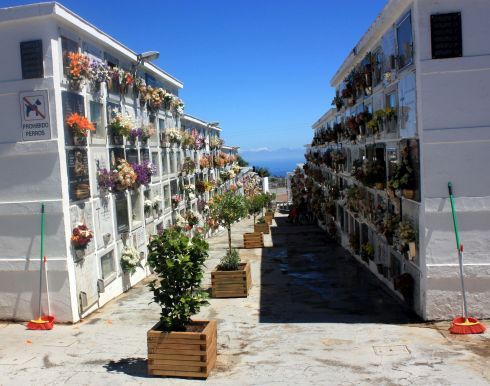 Cementario Calle del Calvario 3 with the Mausoleo of the historical Portuguese family Dorta Fuentes and many more settlers from Portugal.
From Tacoronte back to Tenerife towns.
All about the wine of the Acentejo region with its interesting future here.