The latests important 2020 Tenerife Carnival news are that all Carnival  celebrations in Candelaria, Arona and Santiago del Teide have been suspended. This has been recommended by the related Town Halls (Ayuntamientos) as well as by the Government of all Canary Islands. The news were published online by the Diario de Avisos Media on March 12 of 2020.

Green lights were still granted to the Santa Cruz de Tenerife capital carnival. There, not a single event had been cancelled in 2020, not even during the heavy Calima and storm warning. Hence the Titsa special Carnival buses remained of top interest.

The Puerto de la Cruz Website eventually published that its Cabalgata was to take place on Saturday 07 of March 2020 (at 8.30 most likely) and would end with a last night dance festival.  Both had been cancelled due to forecast storms for February 22, hence a postponement by two weeks.  Also, all Carnival flair on Plaza del Charco, Calle Perdomo and Plaza Arco Iris of Esculptor Angel Acosta was to be there for celebrations that included Friday 06 of March. 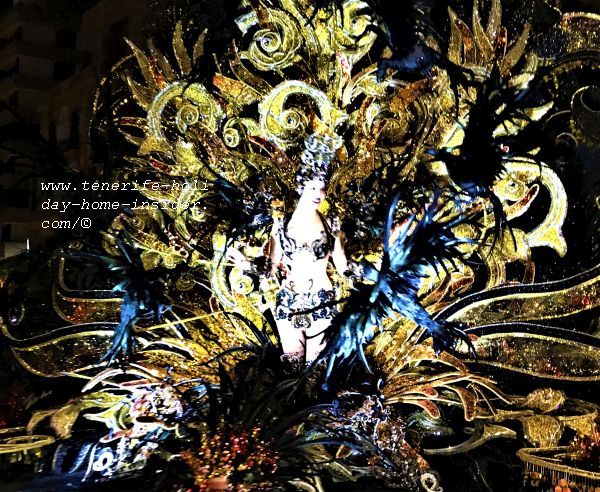 More about the important Titsa carnival novelty of 2020

No more extreme delays caused by weather to Titsa buses from the capital to Puerto de la Cruz, as on Sunday February 23. Now all its Guaguas including the special Titsa Carnival buses may be expected to take you, as scheduled. Check vital platforms you want to use at any Tenerife bus station for the extraordinary carnival Titsa agenda.

Titsa Tenerife Carnival news for 2020 for Santa Cruz, Puerto Cruz and La Orotava by extended time tables for the existing bus lines as per Titsa Facebook below

The special Titsa Carnival buses for the lines #104 and #102 are to remain, as displayed by an agenda below. In fact, they will also serve the Carnival additon for March 06 and 07 in the oldest Tenerife resort Puerto Cruz. 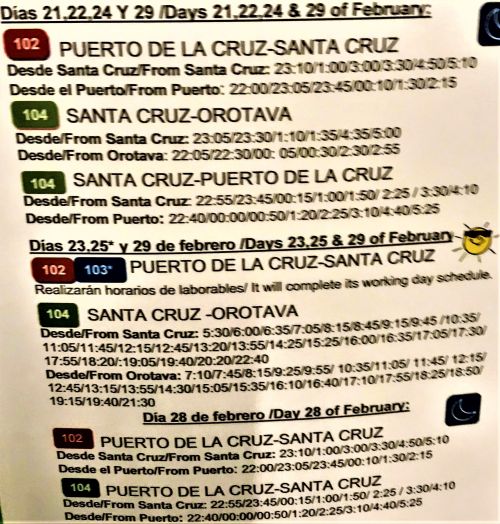 Titsa Tenerife Carnival 2020 detailed bus agendas for the lines 104 Santa Cruz to Puerto Cruz and 102 Santa Cruz to Orotava, both for back and forth Ida y Vuelta in Spanish

By Monday February 24 of 2020,  the "Santa Cruz" La Laguna airport Los Rodeos had started all its flight traffic again while Aeropuerto Reina Sofia the South airport of Tenerife has allowed some incoming and outgoing flights from 12p.m. onward, although it still was closed in the morning. This has been the case due to bad visibility caused by sudden Sahara dust since Saturday 22. Interesting is that Gran Canaria has had flights again partially since early Monday 24. Keep on checking all  incoming and outgoing flights on all Canary airports please, as some have even been canceled.

Tuesday of February 25 of 2020: Tenerife is nice and sunny everywhere and the dust is almost gone.

Mind that the Facebook Page of Fred Olsen Express gave green lights to all its ferries of the Canary Islands.

And what about the best Tenerife Carnival news for children?

The best again for kids are the strange carnival wagons and vehicles, most of which are rather carts. They are called Carros, Autos or Coches Locos in Spanish. New about this in 2020 is that this event seems to make the rounds in other Tenerife carnival towns. Puerto de la Cruz only showed it once. Now in 2020, it is the turn of Los Silos on February 29 at 11a.m. in Avenida Aregume. 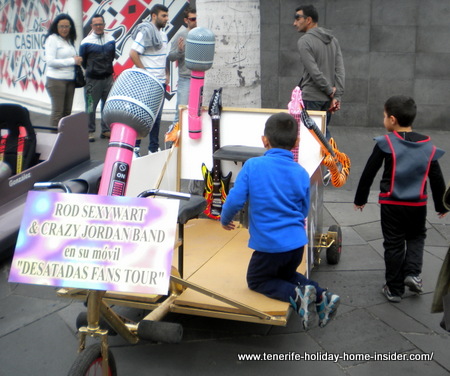 Not everybody knew about these carnival novelties that mesmerize little boys so much, as can be clearly seen above.

A little four year old boy asked us if we could take him to see those new crazy vehicles the 'Carros locos' of Puerto de la Cruz. 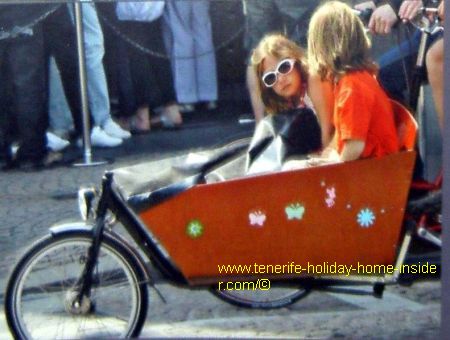 The crazy vehicle which is depicted is handled by means of a bicycle by an adult.

Can kids take part in a crazy vehicle race?

They may be maneuvered by young guys but not by children. Without engines, of course, while a written permission by the parents is needed.

Also,  quite a few rules and regulations have to be observed. 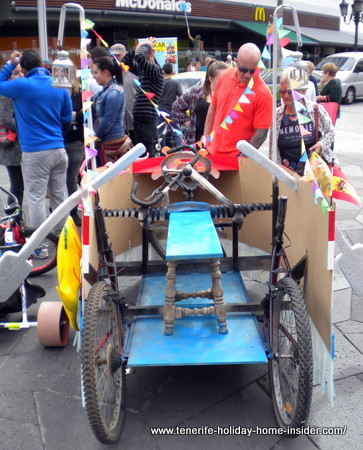 Hilarious Tenerife craftwork that was to be driven later in the day as a real challenge but not as a race could be viewed from 11 a.m. onward. In 2017 a real race took place.

And now the next Tenerife Carnival news - A scandal

Just now, something became the center of attention which never happened  before.

Some of the latest carnival lyrics were interpreted as offensive. They were seen as bad language. The Cabildo of Santa Cruz vetoed them, as they were not for the ears of young children that need to be protected.

Hence the song was changed by the Murga that had written the lyrics. Now, liberty of speech was the new topic. Naturally, it should have had priority more than ever during carnival but where set the limits?

Sorry, the following is not most recent but lets mention it anyway as typical for our times. The Murga Fufu Nifu Nufa Murga reports anything controversial in society. Its track record was rather good after it started to make headlines in newspapers and radio, way back in the Fifties of last century. I liked the Fufa's less aggressive carnival songs of the past much more. The one from 2011 which the following video features is like that.

An amazing carnival machine seen in 2017 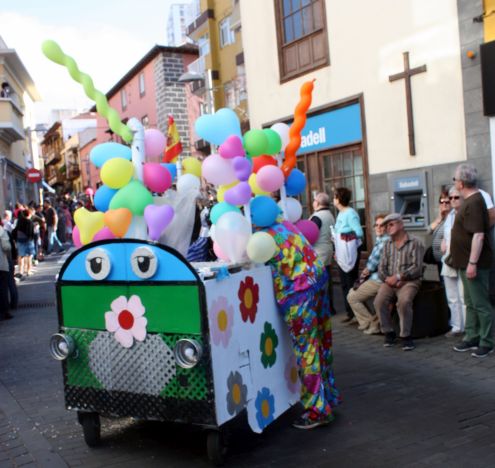 A novelty machine that turns and spews Lametti.

Lametti is not part of Tenerife carnival news. However, the portrayed novelty machine may be. It spits its Lametti in a pretty wide circle. Without water, of course. Perhaps, some German invention. These mini paper off-cuts have been a funny way of recycling office paper at Fasching the carnival of Germany for a long time. Imagine, thousands of colorful paper dots on the pavements after this gadget stopped its "mischief"...

The dress and attire on wheels of the 2016 queen had a weight of 80kg. The one by Madame Soleil of the year after was not much lighter. 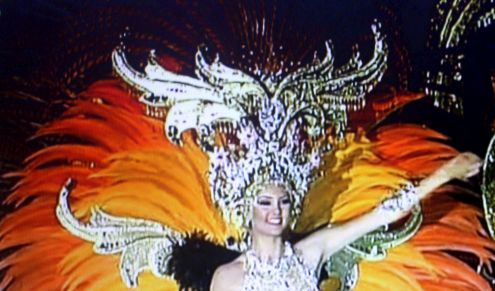 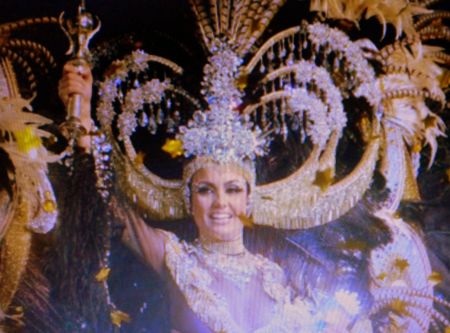 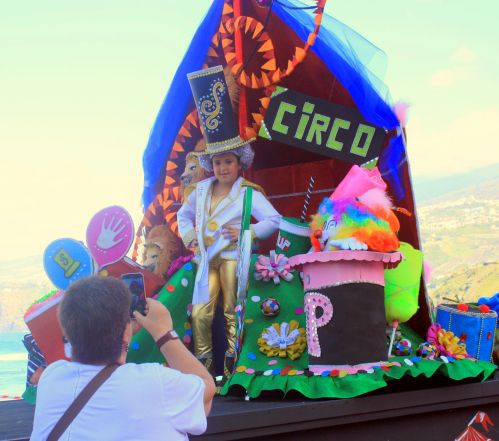 
Kindly use a translator tool for your own language...

Tenerife carnival news about the weather

For 2020 there was a good weather forecast from February 22 onward.

So why did they suspend the Cabalgata of Saturday February 22, 2020

Carnival floats are not made to resist wind. Sudden winds from South East are said to approach. There is also much dust in the air again and temperatures are rising. A Calima from the Sahara desert may be on our doorsteps just now. Accu Forecasts gave orange and yellow weather warnings until Monday 3 p.m.

In previous years as a matter of interest?

In the past, the cloudy January of 2015 and 2017 had many worried. Mind Carnival 2016 was with summer weather galore. There had not been cool disguise seasons in Tenerife since 2006. However, all went well with about 20 degrees Celsius in day time for all parades including the Grand Coso anywhere on the island. Then, about 4 days before Lent, carnival approached its festive climax. Then, not even cooler nights did prevent the heating up of a mounting frenzy. Weather indeed can change quickly in the Canary Islands. <p>

Carnival novelties for the palate

Puerto de la Cruz has its own Spanish expression for it, namely Carnaval de los Sabores 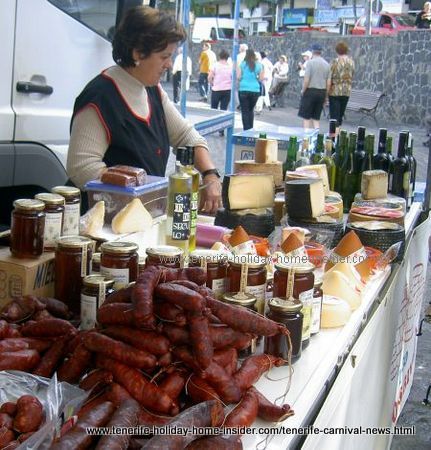 The depicted street stall which doesn't offer any fast foods,  but wholesome products from Northern Spain, is always by the Muelle on all carnival days even when other vendors only take part at night.

Those were introduced recently. You can tank energy by downing some of the best beers. You may comb these latest kiosks for traditional food like sausages, cheese, Tortillas, Papas Arrugadas, Pizzas, Arrepas and any carnival treats for your sweet tooth.  I wonder if the traditional German Carnival food the Kräppel pastries are also found there.<p>

From Tenerife carnival news back to Tenerife attractions carnival