Get informed as well as inspired by Tenerife details photos of Masca, Teide and others after fires! Don't only see the sad side!

Lets look at Tenerife details of photos of Cañadas with Teide first.

There isn't only sorrow but beauty after fires, too!
Regard some photos in this page with poetry or visualize pictures as possible art or as highly suitable for it...

I have to admit that most photos on this page are rather small. Anyway, copy what you like with Pinterest by clicking the icon in them. 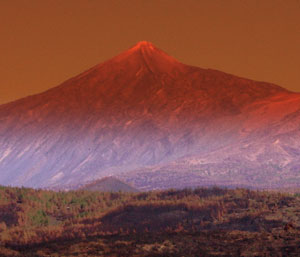 One of photos Mount Teide as a fire symbol.

Imagine the mighty Teide with fire in its belly and a red hot glow around it.

A mountain that stands quietly in the background with a body steeled against harm - against wildfires in Tenerife.

Teide accessories are by its feet like brown shoes - a rough country side - green before. 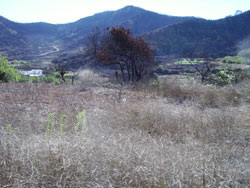 Tenerife landscape transformed by the fire-fairy

The breath of the fire fairy
blew over parts of Tenerife lands.

A silvery touch was left behind in fairyland fashion with nature and grasses whispering like voices of ghosts in the mountain wind.

Kind of to be understood as surrealism or to be elaborated as such...

Nature does its own transformation of style.

See it as you like but, don't only look at Tenerife details after fires - in sorrow, only...

There is beauty in sadness in the eye of the beholder after the fires in Tenerife.

Nature delivers so many motives for all styles of art.

No kidding, you really see a classic case of cubism. Indeed nature itself had a hand in this landscape with Mount Teide.

Change the colors and forms of the Tenerife details you make out slightly and you have your own piece of art.

Contribute with your own works to
attractive art shopping, eventually.

Double click for better impressionism....Pretend adding your own dots of paint, sprinkle in some light brush strokes and turn the photo of a Tenerife countryside with Teide, burned indigenous pines, different trees, roadside and other details into an impressionist painting...

If you are not trained in art just visualize the picture as a landscape bathed in lights barely touching tree
tops... Not the author is responsible for such suggestions but, Tenerife wildfires 2007 which left island particularities to work with.

Landscape may be romance/romantic painting

Imagine Tenerife details of a shepherd with sheep
or whatever you might fancy and you have a picture of romanticism, a romantic scene...

Devastated land only needs life filled by people. They exist, although, hidden. Make them come back.

Turn what you see into something with even more romance... 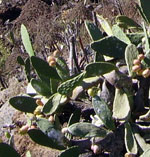 Unharmed by wildfires Tenerife Prickly Pear Opuntia Cactus is waiting for the bees. This cactus which looks like the ones found in southern Africa grows wild near Mount Teide and all over Tenerife amidst other endemic plants. The parasite Dactylopius Coccus scale insect from which Cochineal die is made, certainly, survived flames which should have been confirmed in page endemic plants.

The tinier life forms are the more immunity they have against any natural harm including fire.

Picture this palm with a striking burned black trunk which will adorn it for ever.

A Tenerife Masca palm is bowing to the sun.

Fire couldn't bend nor destroy it.

Nature's honor is always directed to the warming light.

Now, many such black palms have become striking Tenerife details.

They bow in their own fashion
all over this so called Masca pirate village slopes.

Look at the pruned palms in and around Masca.

Palms in the highly important Tenerife tourist destination were cared for in this way shortly after the fires.

All fire damaged Masca dwellings seem to have been rebuilt or repaired.

Native vegetation all around them recovers their lush deep or gray green, slowly. Rain is needed. 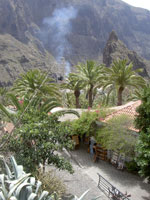 Much in Masca looks like it never saw any fire. Tourists come and go to look, to walk, to hike, to climb all around and up and down Masca.

The shop for Tenerife souvenirs Masca where the author can be seen walking in its neighborhood had a palm standing near it - without a black trunk.

It gave testimony that no flames touched it.

About 10 feet below the shop and very near the spared palm an indigenous Canary palm tree wasn't as lucky.

It was branded in black. So was what was left of a shed beside it.

Ironically, close to the latter scene about 100 meters (330 feet) further on was fire smoke rising up into Masca air, when friends and I passed by in August 2008.

Guess, how we felt spotting this, already from far...

However, such minor Tenerife details didn't seem to cause any panic. Some lorries were parked near the smoke. Those who most probably cared were invisible to us. 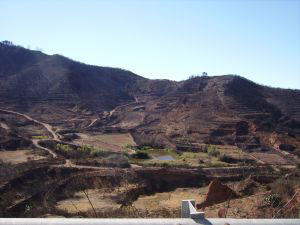 Sad realities after fires in Tenerife

Shortly after the devastating flames nobody could have been inspired to see any art in it. People were too worried.

My first fire damage Tenerife details were captured on photos by October 2007.

It was almost hurting to see Tenerife exposed to the elements like that, about 3 months after the wild flames' disaster.

The fires around el Tanque town which is near the mountain range by Los Gigantes slopes,
just above town of Buena Vista del Norte shaved, almost, everything down to brown soil. 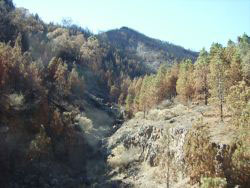 Discover another one of my Tenerife
pictures with forest fire damage and bare empty spaces between pines left behind after the flames where small gorges in between are well visible.

Here again, mount Teide is in the background.

The next 2 photos will
reveal fire harm of a different nature.

Below see a focal point of Masca with a lonely dwelling whose roof is still nice and red. Some green palm tops are sprinkled nearby. Cinder gray color surrounds almost everything. It was captured on camera by my friend César F.Real Real shortly after destructive flames hit this Alice in Wonderland mountain spot of the island of Mount Teide. 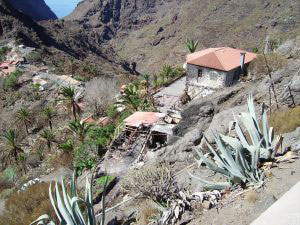 Masca's mountain slopes with extraordinary views from its "rabbit highways" were off limits for humans for a good while after the fires. So were, all proper hiking paths.

There, obviously, will be landslide danger when the rains come which will heal the country, in general. Look how exposed much of it is... 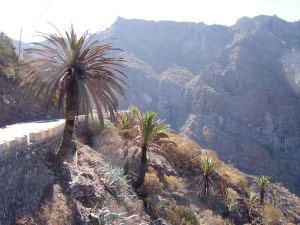 Take notice of mountain slopes, cliffs, and gorges of Masca still being spectacular Tenerife details after the wildfires.

One year later, we could see that Masca recaptured most of its former subtropical, romantic movie appeal. 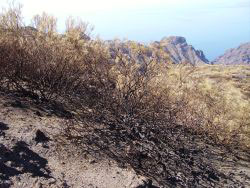 A hill
near the rugged alpine Masca paradise


showed a rather uninviting landscape in detail last year by October 2007.

We had no rain, really, which would have caused shifts of the soil.

Notice the vulnerable spot on the photo beside... 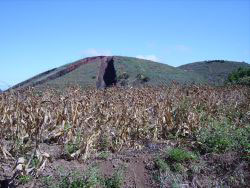 Don't the crops on your right
look like singed corn to you?.

Or could they be sugar cane
just as well?

Yes, many farmers were not
going to see the harvest they
were expecting. 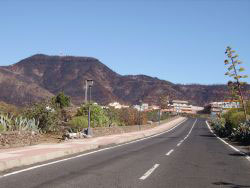 By the road from Masca leading into
the district town of province Santiago del Teide which carries the same name
all mountain slopes were deprived of their protective greenery by Tenerife fires. Green sprouts, slowly started shooting again, a year later.

After fire photos of the town of giant cliffs which is very closeby are irrelevant. Los Gigantes was not exposed to the tragedy.

Loss of rare birds due to Masca fires?

Also mind that any natural disaster is always a big threat to wild creatures.

Above photo round up of Tenerife after fire conditions doesn't include damage to live stock and pets because, it was rather insignificant while people were not harmed.

From Tenerife details back to wildfires in Tenerife of 2008