Waterfall landscaping is tops by the Tenerife beaches of Playa Jardin at its beach Punta Brava.

The indigenous Guanches favored this spot and certainly made the best of it to adapt the landscape by a natural fountain to their needs.

A waterfall is very likely to have been there before, as grounds are still very steep and rocks are abundant above the seashore. 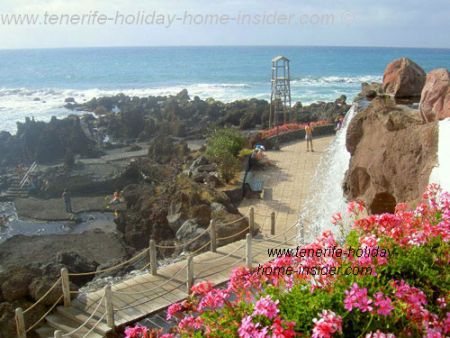 Most probably, the expert landscaper from Lanzarote Island envisioned the ancient cave as well as the rock island opposite as borrowed landscape and saw it all as a perfect landscape composition. 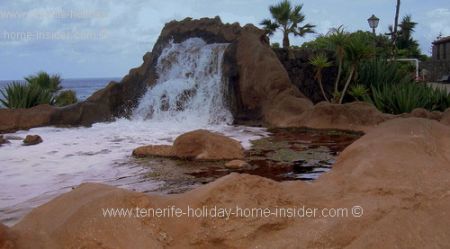 Yuccas and Agaves used for landscaping

Yuccas and agaves feature with other waterfall plants around a top basin made of rock boulders...

Some of them are in a small flower bed by a huge veranda behind the waterfall. The others are below the falls, as shown in the next photo.

The depicted image is spectacular for a water feature design. 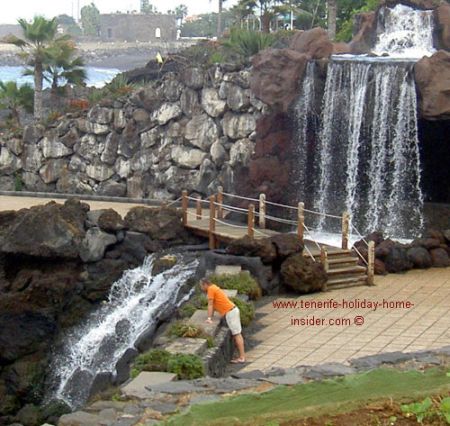 How does the water reach the falls now?

One way would be from the Teide Canadas. The other would be by pumping up ocean water, as happens with the extraordinary Lago Martianez.

Perhaps, it leads to a pump room which may also be used for storage of tools to maintain the waterfall landscaping.

More about this extra landscaping design challenge with waterfalls from different directions at the the Puerto de la Cruz Taoro with its perfect garden restaurant. 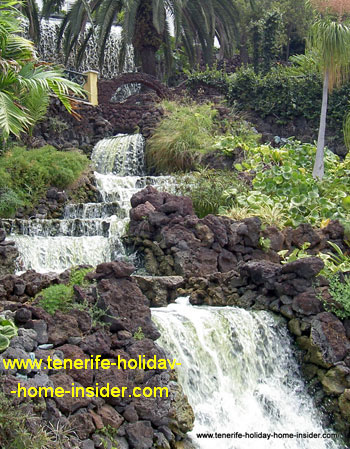 A wealth of precious shade plants which were included in this waterfall-design may be discovered.

You may notice the usual volcanic rocks and boulders as well as almost gray stones of volcanic origin.

They were used to create waterfall retaining walls...

By the way, natural water was used with all the water features of this park.

Its source is above the slope.

There it also served to fill a large pond on the grounds of the former Casino Taoro which was Spain's very first health Spar Hotel of the 19th century.

By the way, ivy is covering the main retaining wall in this semi shaded Taoro recluse.

Mature indigenous Phoenix palms are also part of the waterfall landscaping at this oasis with much filtered sun. 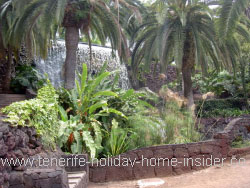 I did not see Staghorn ferns at the Taoro falls with this shade garden design. Those ferns are part of platycerium species. They would have looked fantastic in this place. I grew them with a similar climate in my South African garden, after I attached them with old nylon stockings and some moss to palm trees together with Tilandsias. All this was beside a fish pond where I even managed to have some ground-bromeliads in trees. 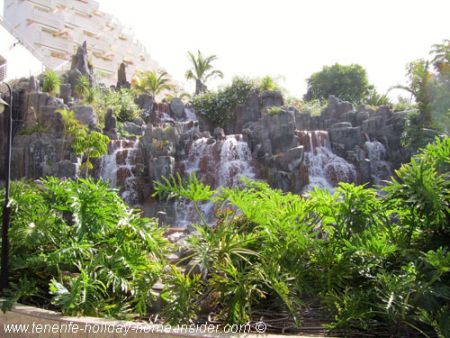 The exact spot of the falls is at Puerto de Santiago right beside Los Gigantes. It is below one of several buildings of this extravagant Tenerife hotel complex on Playa la Arena. As, the hotel is above the cliffs, its waters are therefore running down from black rocks of Lava that have most probably been retrieved from its very close shores of the biggest Canary Island.. Enlarge the photo and discover, at least six separate water features. They are in the rock garden of a naturally composed wall... It was César Manrique the expert environalist who taught us how to place them as accent points and for other reasons. Here too, a pump is most probably used. The water also feeds many big philodendron plants at the bottom of the slope feature. They certainly profit from the moisture in the air, which the spraying waters produce.

How to build a waterfall with a retaining wall block.

The above video may help to construct a watefall, similar to the one of Hotel Barcelo.

Watch this video with good tips and waterfall design graphic on how to build a waterfall. 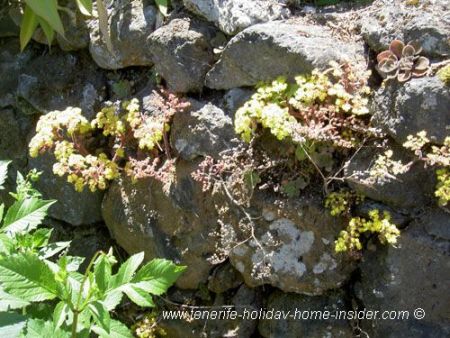 This photo shows endemic rockflowers with delicate blooms of the species Crassulaceae which grow in volcanic rocks. Encounter them near a waterfall with a special purpose by clicking here.

Look out for those wonders of nature in other high humidity locations in Tenerife... Try to incorporate them into a waterfall construction design, when you have your own holiday home in Tenerife... 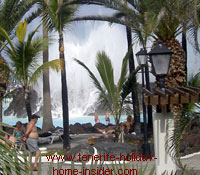 Landscape with giant waterfall from fountain at top Tenerife attraction

The Lago Martianez waterfall landscaping in the middle of its biggest lake is a sensation.

This waterfall construction was done after César Martianez had passed away. It would have made him happy to see it. Admire other water features and outstanding landscaping at the Cesar Manrique lake...

Want to see highly attractive Tenerife things to do or more locations ?

Discover how to build a pondless waterfall here

From waterfall landscaping back to hanging gardens