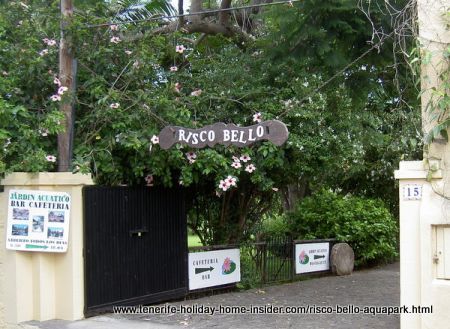 Risco Bello Aquapark was a tea garden with bar and café with more than one landscaped lake.
This park was never for water sports and water fun.

Indeed, this park has been closed until further notice. The reason for it has not been made public.

Its gardens were in a fairly large property in the prestigious suburb of the Park of Taoro  high above the Orotava Valley. The propery remains on its hill with beautiful views to both the coastal Puerto Cruz as well as to La Paz of the oldest Tenerife resort.  You could spot the skyscraper of the Belair Apartments as well as Hospital Tamaragua from the waterfalls just outside the Risco Bello park.

Here you could read Jardin Aquatico which would mean aquapark in English because an aquatic garden is really unheard of. This signpost was hanging on left of the Risco Belo gate in the above photo.

Now, to Bernardette's water park with directions to get there find here.

Bernadette was an elderly Belgium lady who was living there with other family members after she took over the former large farmstead a so called Finca  from her late mother. It was Bernadette who turned a humble property into a recreational little botanical park like other Tenerife farm estates with large scopes. In the end, she also gave tours of the main water garden that is sloping down on terraces on one side of the estate. She asked EU 4 for entrance for adults and, EU 2 for children. 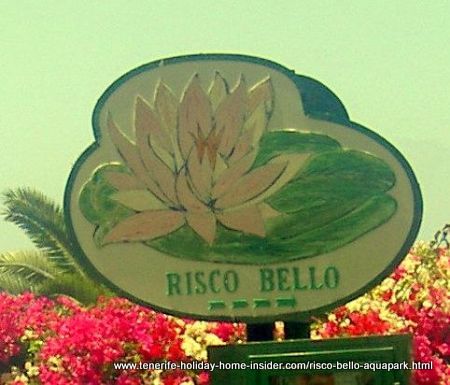 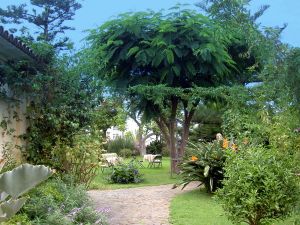 You wouldn't miss the Risco Bello partly tropical, partly subtropical water garden in Taoro Park.
Many large signs pointed to it. They were near the former Casino Taoro which was once the most important Spa hotel of Spain. (to be restored last not least as said in the Media in 2019)

Flowering shrubs in various shades of gray and green were around you. A pathway lead to the owner's residence on the property. Lush, tall trees are still shading a private sitting place by a table in the background on one of the lawns. 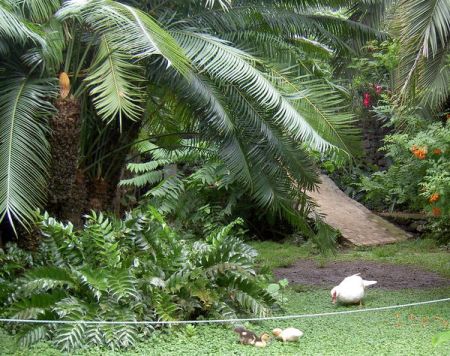 During my last visit at the Risco Bello Aquapark I encountered two baby ducks together with their mum at a remote corner of the garden. They were resting on the lawn below the incredibly lush, beautiful palms of this tropical oasis. The green of the vegetation is so strong you would think that you are somewhere in a tropical country. When you entered the in property you were facing a most enormous palm tree. I've lived in Africa for a long time. Seldom have I seen such an extraordinary, beautiful palm setting.

By the way, Bernadette of Risco Bello Aquapark charged us EU 5 the other day for a large cup of continental coffee with yummy cheese-fruit cake with cream. You can't complain, as the park's surroundings are so privileged. 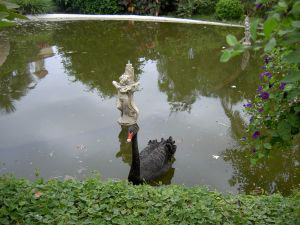 Please mind, that the place is rather exclusive. Perhaps, too big crowds are not preferred to enter this semi private oasis.

A lone, black swan may remain there. It may continue to ride the calm waters of a large pond that's bordered by light green ground cover. This is by the tea pavilion. Can you make out the reflections of trees and bushes in the dark water? 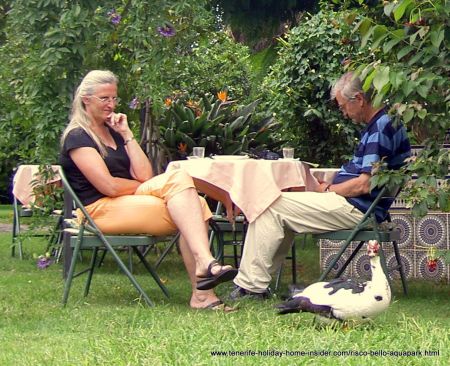 Risco Bello Taoro with duck visiting for tea in the park.

A garden pavilion which is hidden by lush vegetation is behind the mosaic covered fountain. All is part of a charming nook where people could take tea breaks. A duck which didn't seem to mind often strolled past. This could just as well be at the Monastery park which was a former farmstead.

The part of Risco bello where entrance was charged

This lower section included kind of a cave walkway and a Japanese wooden bridge that spans over a lake. The red bridge was striking. It went very well with the green of the surroundings. What surprised me there again and again is that even a Lala Palm could be discovered nearby.

This wasn't one of the typical activity aqua parks in Tenerife. It was a special oasis to discover plants whose names you could find out from the owner. It was a place for relaxing and for contemplation.

Why some mothers loved the Risco Bello Aquapark

Actually, it's young children who liked being there very much. They could play balls or other games on the lawn, while mom enjoyed watching them in a most soothing environment.

Other man made parks besides Risco bello Aquapark

There is this city park for ideal living in the capital Santa Cruz. It's big and public whereas the Risco Bello was so private. Not to forget is one of Spain's most prestigious parks the Puerto de la Cruz botanical Garden.

Note: I never got anything for recommending Risco Belo Aquapark. Bernadette who was a very elderly lady wouldn't even show me the bottom of her park for free never mind offer a free cup of tea. She would also never buy any online advertising by a Search Engine. People that age just don't do that nor do most Spanish people in Tenerife. Now, Instagram and/or Facebook besides fliers are the only popular means of advertisement in gastronomy in Tenerife, really.

I certainly would have returned there with my dear friend who liked it so much. However, Doris de Chiandussi passed away suddenly, and her homepage and online business went for the birds.

Now the Risco Bello may join the legendary one of the royal Guanches by a small lake the mosaic of which renders it part of Tenerife folklore.

From Risco Bello Aquapark back to Taoro Park which to me is the best area for a holiday home in Tenerife.