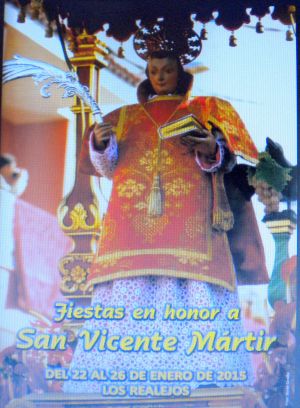 Spain traditions are reflected by Spanish holidays called Fiestas all over Spain, on its mainland as well as on Balearic and Canary Islands.

Tenerife fiesta celebrations are prominent on an island of a mere 800 000 inhabitants.

Many a holiday home in Tenerife in and around the San Vincente resort Tropicana is owned by British and other nationals. All enjoy free wine and Tenerife cuisine during San Vincente Holiday Fiesta every winter thanks to Spain traditions.

In fact, Spanish traditions of little Tenerife towns and hamlets are famous for surprising fun and generosity.

There is another religious Spanish event without free food and drink, though. That's Corpus Christi La Orotava, whose traditions are world famous, contrary to the ones of San Vincente. The amazing art and crafts in the open with sand and flower carpets of La Orotava honor the body of Christ as a sacred symbol.

San Vincente Tigaiga traditions date back to February, 22 of 1609 (400 years) which is exact church holiday San Vincente Mártir.  The agenda shown  includes free live music with dance on most days for all to enjoy.

An interesting history involves the dramatic Landres Pest epidemic which ended on this day of the saint is reported by El Dia. in Spanish.

Why are Spain traditions by Fiesta San Vincente mainly celebrated at night?

Normal work in San Vincente doesn't stop during day time during most holidays. It's at night when most prefer going out in rural Tenerife.

This is deeply rooted in Spain traditions on mainland Spain as well as in the island's culture by its own customs.

Also, night time celebrations lend themselves to more romantic vacations which can be seen in La Laguna around Christmas where walks and enjoying a traditional restaurant is one of recommended things to do in Tenerife.

Where is San Vincente Tigaiga? 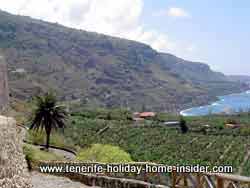 San Vincente is located about 10 minutes by car from the traffic circle on the bottom of Los Realejos Alto. Watch out for it on the coastal road after you have passed the romantic San Pedro lookout of Realejos with all its beautiful coastal bananas as far as the eye reaches.

The old quarters of San Vincente and Tigaiga are mostly situated on a steep hill.

Please note San Vincente is a Pueblo (village) which belongs to Los Realejos and is hardly 15 minutes by car from Puerto Cruz.

Both latter towns are famous for their traditional ways which are celebrated by fiestas of all kind.
But, this is no reason for a little village to do its own thing to add to the island attractions by festive Tenerife events for locals and tourists alike.

Will there be more Tenerife holiday fiestas in San Vincente in the future?

Every year a different business of the village San Vincente organizes church holidays with shows, dance, games, and free food. Inhabitants are encouraged to help finance everything by donations, beforehand.
In 2009 the village carpenter was in charge. In fact on the last day of San Vincente Tenerife holidays of its church saint a new organizer is named.

How get to San Vincente or Tigaiga?

See mapped pictures of San Vincente Tigaiga, where you even see the coastal road leading to it in photos of Realejos.

Best is to rent a car when you don't have one or to use a taxi when living near San Vincente or in one of the hotels of the biggest Canary Island nearby.

Please, return from Spain traditions to Tenerife Fiestas to learn more about celebrations on a bigger scale.