Some English ones don't only survive as famous landmarks.

Old friends can be met there, while your favorite sport shows on the televisions of the clubs. They have the food you like and perhaps a good English Ale.

Some of the following Spanish and British bars are like that. 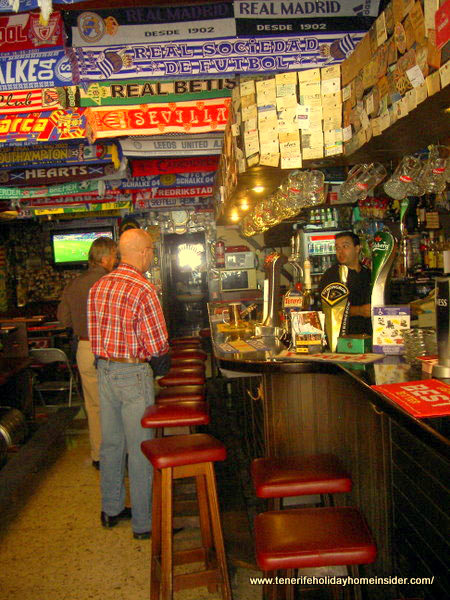 The sports decorations at the Bee Hive Pub I are out of this world. They add to a superb mood together with good beer and the best company.

Soccer Paraphanalia, such as British and Spanish club names in the Tenerife sports bar Bee Hive Pub I

Hence, sports paraphernalia are a must for success with customers. More about the original and historic British Sports bar Bee Hive Pub I of Puerto de la Cruz

Another must for a sports bar in Tenerife

It's very important for such a bar on Tenerife that it sponsors a popular football or any other sports team and that it shows it on its premises. This for example, has been the case with Bar Paraiso Toscal Longuera since about the 1975. 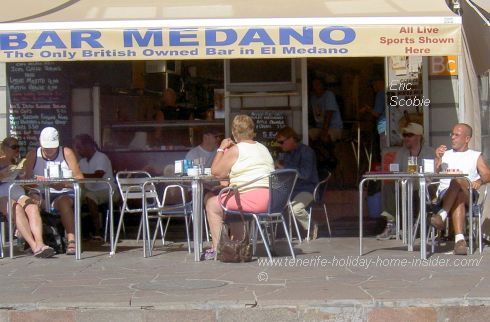 Bar Medano the only British owned bar in El Medano, as displayed outside. Also read "All live sports shown here".

Hence, another one of English sports bars in Tenerife. Find it at the start of the beach timber board walk almost opposite the stilt building of Hotel El Medano. 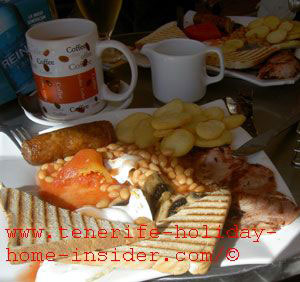 A friend the Norwegian translator and writer Eric Scobie had recommended the place.
Twice, I had an English breakfast there. It offered real baked potatoes, fresh mushrooms, good, fried sausage, baked beans, toast, fried egg, English breakfast tea,  you name it. Only, last time, the Orange juice wasn't included in the price which was still very reasonable.

Perhaps,  a live match between Manchester United  and FC Liverpool will bring proper English vibes to this place, that are otherwise missing.

The following video shows the exact location of Bar Medano and that it's really a British bar.

Needless to say, they must be big and of high vision and sound quality. It also helps much to place them in such a way that people can see them from the bar's street terrace. Outside doors may best open along the total width of the bar. 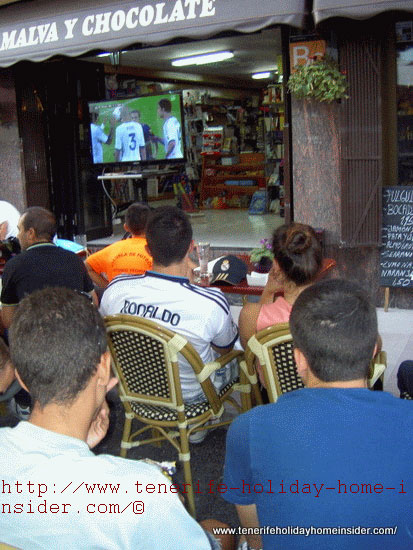 Depicted is the former Libraria (stationary shop)/ Cafe Malva y Chocolate that even had street Barbecues to celebrate the victory of an important Futbol match. Later, it became one of best Italian restaurants by Puerto de la Cruz.

Important remodeling for a sports bar.

The small Bar La Longuera, 56 changed its total image for this. It was big before.

Now, it seems only to be dedicated to soccer and attracts huge crowds during relevant days. Its name doesn't even mention sport. By the way, people from the fitness club over the road also go there.

Stainless steel and top illumination dictated a new practical look. The bar and small kitchen has been moved to the back so that TV Screens could be placed on lateral walls. Fútbol matches may still be followed from its small street terrace outside. Its four lady owners stopped to serve elaborate meals to suit the economy. Anything goes, from cheap and special breakfasts to fast food snacks.

Bars must subscribe to them.  All sports of the island and more must be shown during all business hours.

Cheap beer is an important factor there. Since 2017, the bar price for local Dorada beer has been seldom more than Euro 1,20. It had been much less at Bar La Longuera until recently.  Watching live Fútbol makes thirsty. More so heated discussions with friends...

Burgers,  American sandwiches and last not least Bocadillos are sold mostly in sports bars, these days. British bars may also offer popular Fish and chips in towns near the sea.

Why bars became important due to social habits in Spain.

One of first Tenerife sports bars in Los Realejos was the Bar Paraiso at La Longuera, 29. It still displays trophies of a local Fútbol (soccer) club.  Note in this context that few Spaniards or Tinerfeños socialize and celebrate at home. It's done in bars and restaurants.

Why bars became important due to the Spain Fútbol history.

Fútbol has been the number one sport of Spain since the days of General Franco.

Then, it was the only recreation and passion where free discussions were not politically censured.

Later on, locals as well as expats have come to watch live Futbol in the Paraiso Bar since the bar had its first Television.

In 2010, this establishment put up extra tables and chairs for the final match in South Africa when Spain won the  FIFA World cup. Then, the Spanish national team indirectly won its country consecutive income of 398 Million Euros ( US $ 579,3 Million). That's when soccer also became a real sociopolitical force.

Therefore, Tenerife sports bars rose in importance. Flags of the top clubs FC Barcelona and Real Madrid are not even removed from balconies and roof tops of some houses.

From Tenerife Sports bars back to Bars in Tenerife