What even a spooky night can do for Tenerife business.

The capital's leading heads were going to give Tenerife business a boost.
How?

They needed strategies to make the Chicharreros of Santa Cruz  sacrifice some of their sleep and venture into the city roads. They dubbed the experiment Plenilunio.

That stood for a white night with a full moon,  hence the 'noche blanca' of September 21 of 2013. Little, did they expect smashing results. Here, it should be noted that the capital of the biggest Canary Island is not known for much nightlife compared to many other cities of Spain.

More of a boost for Tenerife business

Before we forget the latest news for 2015, it must be added  that Saturday 26, of September will be the next full moon celebration. Activities will be much like before. In addition will be the inauguration of Palacio de Carta on Plaza de Candelaria. That's the mansion next to the building where Zara fashion is sold. Very relevant is also the possibility to look at the moon through a proper telescope. This is possible at the Municipal Market Nuestra Señora de Africa whose Tenerife business hours will be until 1.a.m. on the day of Noche Blanca. Interesting is that Titsa runs 8 bus lines for Plenilunio.

In fact, 10 such somewhat eerie tours had the highest demand in 2013. They contributed to 6500 visitors at the Guanche mummy museum Museo del Hombre y de la Naturaleza.  That's about the same amount of people who enter its doors in normal day light hours of one month.  Its museum kids festival with 500 participants followed suite in popularity, although this one was not entrance free. 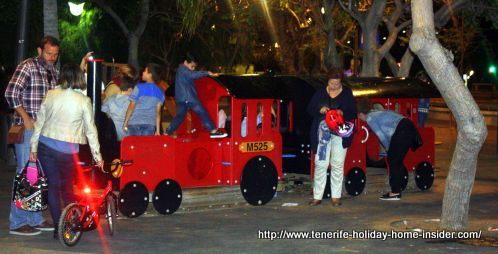 The Museum of Almeida by the bottom of the main Rambla had to open its gates earlier in 2013. That's how much nightlife there was. And all this to avoid a total traffic congestion in the area...

Here, whole families which amounted to 1200 visitors proved the high popularity of the museum. Indeed, it's a known fact that this military museum is much loved by young and old. Its pirate flair, the 'Tiger Cannon' and the glorious victory over Horatio Nelson give much food for thought.
By the way, some sort of a simulated helicopter skirmish of the museum amused the most young greatly.
It's unbelievable but true that a museum show which took guests around its premises was still in full swing by 3.a.m.

This City Marathon registered 650 athletes where the town mayor José Manuel Bermúdez took part and strained a muscle, by the looks of it. 10000 onlookers were cheering the runners. All built up much thirst. The latter had to be drenched which helped the Tenerife business of the city's bars and 'Tascas' very much.

The T E A the Tenerife modern art exhibition center attracted about 700 visitors for the classical music by the City Symphony Orchestra as well as by art activities in 2013, while Tenerife's oldest theater showed its fair share of interest for its guided tours.

Mr. Florentino Guzmán an important man for the  capital's economy and who was co-organizer of Plenilunio of Santa Cruz had many warm words of appreciation. He thanked all who came and made the night such a great Tenerife business success by not sleeping.

Of course, nothing of success happens without rubbing off onto the social networks of Internet, nowadays.  Twitter must have had a ball. Its messages from Tenerife regarding the capital's 'Noche Blanca' of great nightlife of Santa Cruz of September 21 in 2013 almost amounted to 2 million emails that were sent.

The night events in 2013 which surpassed the planned two a.m. partly by more than one hour attracted 50000 people or call them curious night owls.

Mind that Santa Cruz de Tenerife with its refined parking spaces has about 206965 inhabitants, as many have left during the Recession since 2009. Not many may have come to celebrate Plenilunio from out of town, as there is little space to leave their vehicles.  In fact, Titsa came up with a solution, as mentioned before.

Some of this information is based on a Media report by the Spanish Newspaper La Opinion, I am unable to link to, unfortunately, in order to give credit.

News are up for Navilunio the first related event for Tenerife Christmas in the capital on December 28  on the last Saturday of the year 2019.

Check out Plenilunio Facebook for Santa Cruz to see what's up

From Tenerife business back to Santa Cruz Tenerife

Have your say about what you just read! Leave me a new comment in the box below.