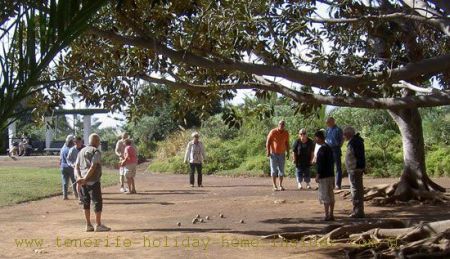 What counts is that both activities, such as playing Bocce or the game jeu de boules is an extremely healthy sport..

More so,
when it is played free of charge in a superb park of good weather, such as the one of Playa Jardin (garden beach) with its hanging gardens in Puerto de la Cruz Tenerife Spain!

Marvel at this crowd of tourists shown by Tenerife pictures of bocce. The people are obviously having fun, as the bocce game of the above image of boule playing clearly shows.
Notice that bare soil under large shade spending trees make up the playground, while the ocean may be viewed through gaps of the subtropical bushes nearby.

The balls of the bocce game look like the ancient Roman ones which were originally rounded, polished stones. Often another variety made of leather are used as well for this popular outdoors sport. 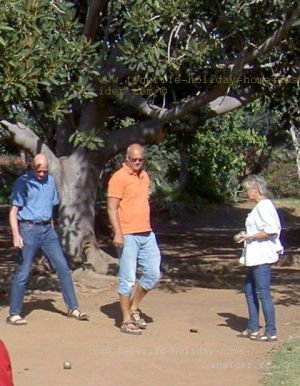 Admire the concentration of three players of the Bocce game in the photo beside...

The people of the Playa Jardin bocce match were Germans. Most of them have a holiday home in Tenerife. They all belong to those tourists that kept on coming for the winter since 1975.

Perhaps, they wouldn't like to join the British at the Alvaro club de Deporte of la Paz Puerto de la Cruz, where lawn bowls was still practiced besides Tennis in 2012.

Tenerife photos bocce of other varieties

Unfortunately, I haven't seen people that play any other type of bocce. Perhaps, they do on private grounds.

About 40 years ago, I once played bocce also in a
park of my swimming club in Germany. However, our balls had various colors and I don't remember the game rules.

One of oldest bocce players in the world? 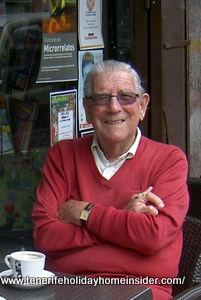 I know the fact about Alvaro's from my acquaintance Angus Low of La Longuera Realejos. Angus forever was part of the community of British expatriates of the club of Puerto Cruz. Angus with his 90 years of age is one of former and oldest, good lawn bowls players in the world. Of course, he can also play bocce or boule.

He told me that he is sorry for not having any Tenerife photos bocce any more from his past.

By the way, there is a slightly different variety of the Italian Bocce game which is played with wheelchairs by the handicapped. It's called Boccia.

Also, young French people have added more fun by some twist to their version of bocce (jeu de boules). There, the players must make jumpy turns before throwing a 'boule' ball. It must be added in this context that Bocce and all its alternatives have many different rules in the world. That makes it a true fun sport for everybody.

What is most important is portrayed by those Tenerife photos Bocce. I could have taken such pictures already in 1997, when I spotted Bocce by Playa Jardin first. The fact is that Puerto Cruz has been popular for this free European sport of Bocce for tourists for many years now. Also, it is most enjoyable and ideal for the elderly on retirement in Tenerife.

However, Iv'e never seen bocce players by Playa Jardin in summer. Indeed, the fans of this ancient Romain sport whom I caught on camera were tourists on winter vacation.

Please upload any of your own Tenerife photos bocce by commenting on the bottom of this page. It would be interesting to know if the sport is also practiced in the south now.

What keeps you away from bocce in Tenerife?

Come to play free games of Bocce, boule or alike in this most relaxing park by the sea of Puerto de la Cruz at any other time of the year.

Closest accommodation for this Tenerife sport?

Check out hotels of the oldest resort of Tenerife for all budgets for beach, bocce and much more...

Want to know all about general rules on how to play bocce, boule or the jeu de boules?

Not to forget is an aerobics picture in a park. It's proof of another superb elderly sport. By the way, the park is Parque Garcia Sanabria in the Tenerife capital.

Retirement tips by Claude include Tenerife

From Tenerife photos Bocce back to Tenerife sports which even includes Guanche wrestling and stick fighting.